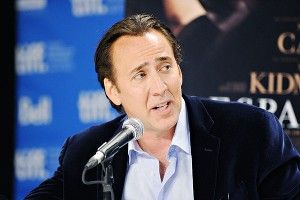 When Michael Jordan retired the first time, you could have chalked it up, at least in part, to greatness fatigue. When you’re so much better than anyone else, what’s the point? Now applying the theory to the world of entertainment, and subbing out “Michael Jordan” for “Nicolas Cage” and “the game of basketball” for “the making of batshit crazy movies,” and we can maybe understand Nic’s new China-set project.

As THR reports, Outcast, a 12th-century war-romance set in the Chinese province of Yunnan, has just been officially announced, with Cage and Hayden Christensen set to star. The film is a Chinese production from the Yunnan Film Group, and will be directed by a Canadian fellow named Nick Powell, who’s transitioning from stunt supervision and second-unit shoots. It follows “two jaded Crusaders who chose to wander off towards the East, finally arriving in western China, where they become entangled in both romance and antagonism with local royalty.” As Powell says, “It was originally a genre film — but I was interested in the idea of a knight in China, [so] I had it rewritten to make it more than just a genre film. I want to make something more dramatic than just an action movie.” Well, Nick, you’ve got Nicolas Cage playing the knight in (12th-century) China, so I’m pretty sure you’ve got “something more dramatic” already in the bag.

Season of the Witch, The Wicker Man, Drive Angry, The Bad Lieutenant: Port of Call — New Orleans, not one but two Ghost Riders — that is a half-decade of zilch competition in American film, batshit crazy subcategory. And so now the ever-passionate Cage — whose mission, as he’s so eloquently put it, is “to find a way to embrace what Led Zeppelin did, in filmmaking” by creating “a kind of a cultural understanding through my muse that is part of the zeitgeist that isn’t motivated by vanity or magazine covers or awards” — is searching for new peaks to climb. And so now he’s trying to make batshit crazy Chinese movies, too.

One last thing: This movie is going to be shot in English. The days of Nicolas Cage starring in a full-on Chinese-language production are, unfortunately, not yet upon us.