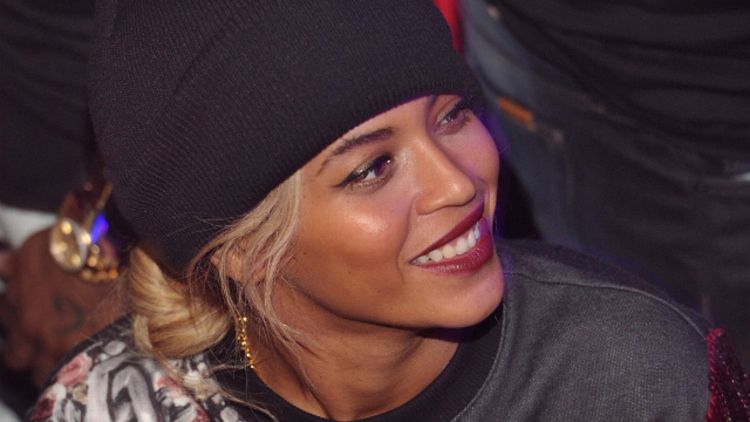 Beyoncé is full of fun surprises these days. How did she choose to follow up the huge success of her secret-until-the-last-possible-second fifth album? By writing an essay about feminism for Maria Shriver’s new book! The latest installment from The Shriver Report: A Woman’s Nation Pushes Back from the Brink (published with the Center for American Progress) features pieces on the subject of female labor and equality from starry contributors like Hillary Clinton, Jada Pinkett Smith, Eva Longoria, and LeBron James, in addition to prominent social activists like Barbara Ehrenreich, Maya Harris, and Ai-jen Poo. The content ranges from personal anecdotes to data and fact-driven essays.

(Since you’ve probably been wondering ever since I mentioned his name, LeBron’s post is called “America’s Working Single Mothers: An Appreciation.” LeBron praises his mother, Gloria, for being a great parent, somehow providing him with emotional and financial security while working constantly in low-income jobs throughout his childhood. He writes, “You think LeBron James is a champion? Gloria James is a champion too. She’s my champion.”)

In a short piece titled “Gender Equality Is a Myth!,” Beyoncé Knowles-Carter (as she is credited in the byline) writes:

We need to stop buying into the myth about gender equality. It isn’t a reality yet. Today, women make up half of the U.S. workforce, but the average working woman earns only 77 percent of what the average working man makes. But unless women and men both say this is unacceptable, things will not change. Men have to demand that their wives, daughters, mothers, and sisters earn more—commensurate with their qualifications and not their gender. Equality will be achieved when men and women are granted equal pay and equal respect.

If women received pay equal to their male counterparts, the U.S. economy would produce $447.6 billion in additional income.

Bey makes good on her recent admission that she had been searching for feminist videos on YouTube. Searching the web led her to the Chimamanda Ngozi Adichie TED talk about feminism, which was then sampled for “Flawless.” When Beyoncé’s “Run the World (Girls)” dropped and was unexpectedly ill-received, blame fell on two fronts: The Major Lazer “Pon de Floor” beat was already super played out by that point, and girls do not actually run the world. Sure, maybe it was more of an aspirational sentiment than a fact, positing that women run the world because they make the children who populate it. But for her 4 album, Bey was crafting an avatar of herself as infallible: a perfect mom, wife, and woman. Beyoncé has preached girl power and female independence since her Destiny’s Child days, but it was always a fairly vague platform. Now she’s getting into specifics.

Something happened between 4 and Beyoncé that made her want to look deeper into why the world works the way it does, and while we can only speculate what goes on behind closed doors in the house of Mr. and Mrs. Carter, I have a few left-field theories. As one of the most powerful women in the world, Beyoncé has probably noticed that in the halls of power she is usually surrounded by men. Beyoncé may have also bought into the myth of gender equality herself, only to realize through experience that the world is not egalitarian the way it claims to be. Beyoncé wants all women to have “equal pay and equal respect.” Part of me definitely wonders if there was a crisis in her marriage to Jay Z. She alludes on “Mine” to “conversations about breakups and separations” and postpartum depression. I always thought Beyoncé was a Betty Draper, who would rather keep up the appearance of a perfect marriage than admit to even the potential of failure, but I was totally wrong and I’m glad I was wrong. Maybe having a kid changed her priorities or made her reevaluate the way she viewed partnership. (This is all totally wild speculation on my part!)

Whatever led Beyoncé to Google feminism and discover the writings of Adichie, it awakened something new and activated an awesome new facet of her public persona. She’s not just walking the walk anymore, she is watching the TED talks and quoting the most relevant parts. She is realizing her true potential, at a crossroads where it would be easy to shrink behind her accomplishments and rest on the past. Even the girl who has everything still doesn’t have as much as a really powerful guy. If anyone has the influence, appeal, and power to change the status quo, it’s Yoncé, and if anyone can get the Equal Pay Act passed, it’s probably also Yoncé.