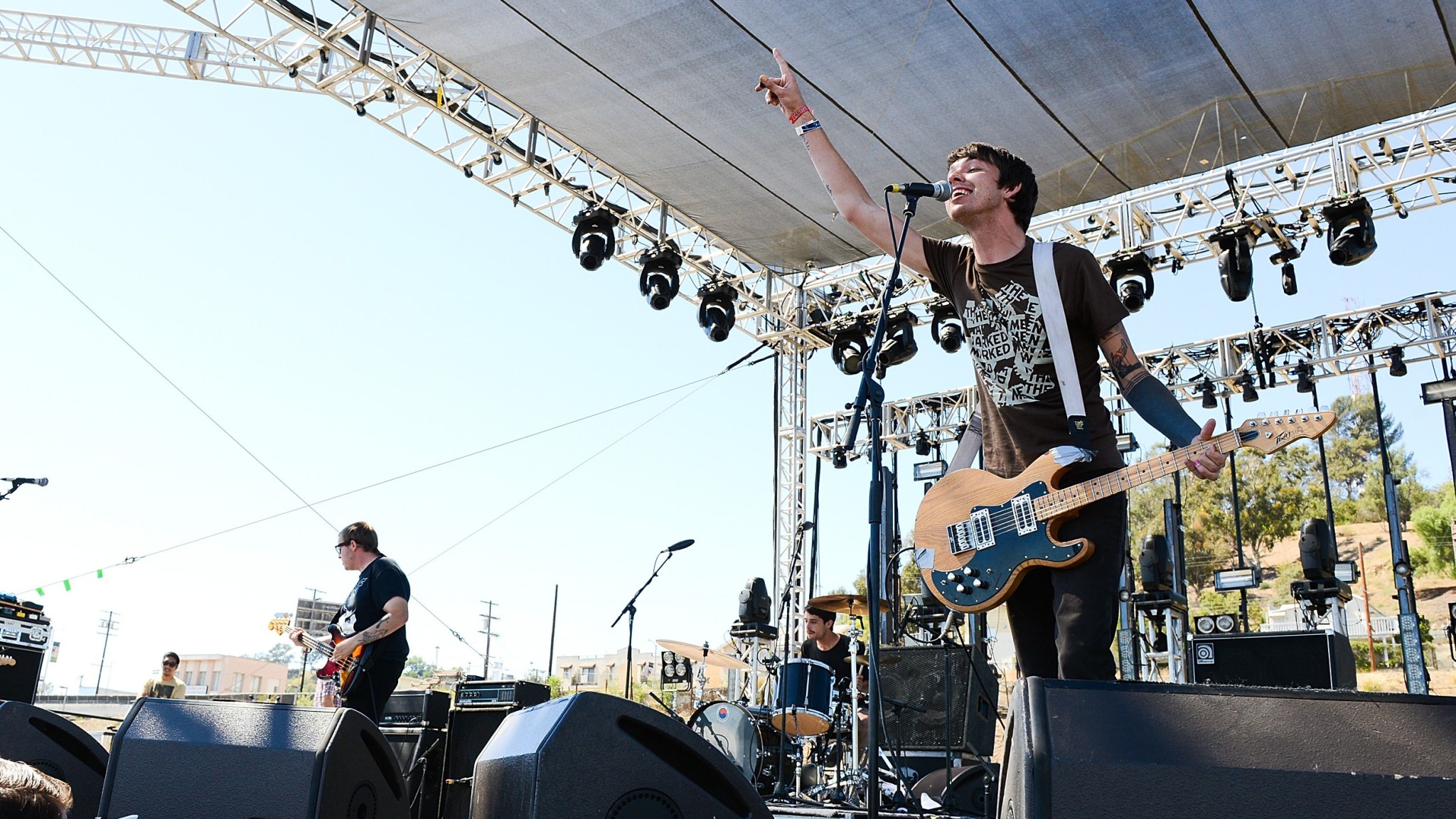 Drive down a short stretch of Sepulveda a few miles off the 110 in Torrance, California, and you’ll find Joyce Manor’s version of CBGB, The Smell, The 100 Club — the hallowed dump that shaped the character of a great punk rock band. You’ll pass by a Walmart, a Target, and the Del Amo Fashion Center recently touted by Vice as a symbol of America’s decline and take a left on Hawthorne into Gable House Bowl. Frontman Barry Johnson recalls, “I decided to join a bowling league my freshman year of high school because I was very into ska. And ska and bowling went hand and hand so I decided I was going to make my parents proud.” It was there he first met bassist Matt Ebert, who was “there for the same reason”; they’d later reconnect through the Orange County Ska message board. Guitarist Chase Knobbe worked at Gable for three years and met Johnson when “a mutual friend got us to go to Disneyland. We talked over a couple of beers in the parking lot — he was 16, I was 21. We actually drank Jooce.”

Considering its caffeinated, soused, sweet, and wired music, it’s fitting Joyce Manor was consecrated over an alcoholic energy drink. And as a kind of quintessential California suburb, the physical and conceptual “Torrance” is the perfect place to inspire a perfect summer rock album, i.e., Joyce Manor’s new LP, Never Hungover Again, released today. Most people drawn to this music formed their idea of “summer” at a time in one’s life when summer was significantly different from the rest of the year — Johnson describes his own as consisting of “backyard shows, everyone would be skateboarding, chased off by security guards, throwing water balloons at people. Very Screeching Weasel suburban knucklehead stuff.” Screeching Weasel being an avatar for dumb shit that could happen anywhere, i.e., the lifeblood of pop-punk.

In other words, endless possibility butts up against limitation — of having an innate sense that anything could happen, but living in a place where it rarely does; of having a car (this is very important) but nowhere in particular to go. Think: Jimmy Eat World’s Bleed American, Japandroids’ Celebration Rock, and, of course, Fountains of Wayne’s Utopia Parkway. Johnson half-boasts, “People assume we’re into classic stuff, but we’re more into blink-182.”

The five of us are seated in Jack’s Place and it’s about as empty as you’d expect a bowling alley restaurant in Torrance to be on a Thursday night. This is where Joyce Manor planned on having the Never Hungover Again release show, and like most great summer plans, it was a phenomenal idea that reveals itself as a tremendously stupid idea if not acted upon immediately. It’s a great venue to mindlessly watch an Angels game over chicken tenders, but it has no stage, no security, no real way of preventing Joyce Manor’s fan base from stealing Gable’s complementary bowling socks and befouling the sitdown racing games. They moved it to the El Rey on the Miracle Mile, a venue that punk bands revere but rarely aspire to play because of its brilliant red carpeting. They also don’t allow gum.

In an odd way, playing an established venue like El Rey reminds Johnson of Joyce Manor’s early days as a gritty band toeing the line between hardcore and pop-punk, playing 15-minute sets to 20 people at house parties. Johnson recalls, “It bummed me out to think we were only going to appeal to beer-drinking punk dudes in their thirties.”

Joyce Manor isn’t trying to be contrarian — it name-drops Guided by Voices and the Smiths, and Knobbe is even wearing a GbV shirt this particular night. But it does so in a way that takes those bands to task, which comes off as way more thoughtful and unique than the average indie rocker trying to place themselves in the proper lineage. Joyce Manor songs, like Robert Pollard’s, are often shorter than two minutes, but they’ve never included more than 10 on an album. When I ask Johnson how that compares to GbV’s tendency to throw in 20 or more as a kind of self-effacing and self-defeating move, he replies, “Don’t you wish they wouldn’t? That’s where we come in: Our albums are only the good ones.” You can hear the Smiths in the choppy chording and dramatic pining of “Falling in Love Again” or Johnson’s longing, lower registers. There’s a more subtle nod in the cover: “It has everything I like about Smiths covers but it’s so our band. It’s not, ‘Oh, we’ll just do a Smiths rip’ like The Pains of Being Pure at Heart.”

The cover is a candid shot of Ebert and Frances Quinlan, singer from the strange, subversive Philly band Hop Along, and Johnson is very adamant about why it’s the cover and why it’s our band: “It looks like two people partying but there’s nothing dangerous or sexy about it.” This is the kind of empathetic, affirmative tone toward the suburbs and the teens therein that makes for great summer rock and is often missing from “serious” works of art on the topic such as Arcade Fire’s The Suburbs or The Ice Storm. And there is something sweet about Never Hungover Forever rather than dangerous or sexy, acknowledging that everyone needs some time free of judgment to learn your alcoholic tolerance in a parking lot, to crush before you know what it means to be someone’s boyfriend or girlfriend. But to paraphrase one of Never Hungover Again’s songs, the end of the summer always comes too quickly — it’s the essence of a Torrance July in 19 minutes.

Ian Cohen (@en_cohen) is a contributing editor at Pitchfork and currently lives in Los Angeles.

Freak Show and Tell: That Whole 'Married at First Sight' Social Experiment? Not Going So Well