Freak Show and Tell: That Whole ‘Married at First Sight’ Social Experiment? Not Going So Well 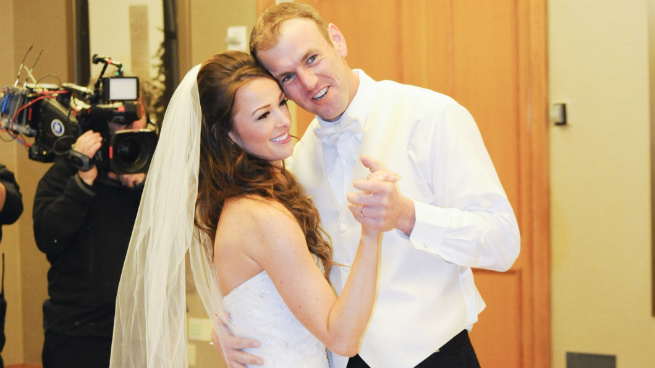 Why Are We Watching Her? She instantly regrets having married her husband, Doug.

How Did She Get Here? A group of “experts” determined that Doug was the best match for Jamie out of a total field of 50 potential applicants of both sexes (so out of 25 or fewer potential matches for Jamie), and she’d agreed to marry him without knowing anything about him except that he was chosen for her.

What’s the Grossest Thing We See? It’s understandable that Jamie would decide she’d made a mistake in agreeing to this “social experiment” — in fact, it’s far stranger that the show’s five other singles apparently haven’t — but if she’s going to weep about how unattractive she thinks Doug is, she could at least have the decency to do it in the bathroom where there’d be less chance that not just Doug but all his family and loved ones would see her.

What Have We Learned? It’s a good idea to know some things about your spouse before you marry him or her. A name is a good start?

Who Is This Now? Jill Zarin.

Why Are We Watching Her? She’s learning how Jenna Von Oy runs her household.

How Did She Get Here? Jill, who makes sure to describe herself as an “original” Real Housewife of New York City so that we know she got fired, has agreed to swap families with Von Oy, an actor best known for her role as Six on Blossom.

What’s the Grossest Thing We See? Jill starts badly by reading in Jenna’s Household Manual that she and her husband Brad prefer to do household chores themselves, and pausing to sneer to an unseen producer that it might not be that they prefer it, but that they can’t afford to hire help to do those things for them. When the two wives meet at the end, Jenna explains why she and Brad avoid getting babysitters for their 2-year-old daughter, Gray, and Jill snaps, “Kids are overrated,” adding that in 20 years Jenna will see that for herself. This was probably either tough to watch for Jill’s DAUGHTER, or else the kind of thing said daughter has heard from Jill several times a day throughout her life.

What Have We Learned? TV is better when Jill’s not on it.

Why Are We Watching Her? She’s working on her marriage with her husband Clive — or, rather, she has apparently decided she’s done working on it.

How Did She Get Here? Since she’s a former cast member of The Bad Girls Club, Tanisha has been included in this special season of Marriage Boot Camp specifically for ex-reality stars.

What’s the Grossest Thing We See? First, Tanisha gets a call from her manager with exciting career-related news; instead of telling Clive, who’s in the room with her when the call comes, what’s happened, Tanisha brushes by him to tell her other castmates. Later, after an exercise in which Clive and Tanisha, separately, both say they would choose their careers over each other, they are attempting to explain this in an interview when Tanisha finally can’t stand to let Clive talk anymore: She punches him in the chest, then gives him a clout to the side of the head, and after getting up from the couch and challenging him to a physical fight, she is suddenly overcome with chest pains and starts yelling that she’s having a heart attack.

What Have We Learned? Even Tanisha’s cardiovascular system is sick of her crap.

Who Is This Now? Saaphyri.

Why Are We Watching Her? She has sought the aid of Drs. Nassif and Dubrow to remediate some bad cosmetic surgery.

How Did She Get Here? After losing a lot of weight, she wanted to improve the look of her breasts and abdomen, and got a recommendation for a surgeon who could give her breast implants and a tummy tuck, but said surgeon turned out not to be so reputable.

What’s the Grossest Thing We See? The grossest thing we see is Saaphyri’s actual surgery, particularly when Dr. Dubrow removes her implants and sees that a lot of the mass that’s causing her breasts to sag is not from the implants but from her actual breast tissue, which has to be cut away, and yeesh. The second-grossest thing we see is Saaphyri at her post-surgical appointment, thanking God for her “new boobies.” But the worst thing we hear about is Saaphyri’s experience with her first bad surgeon, which included her WAKING UP IN THE MIDDLE OF THE OPERATION, whereupon her doctor told her to shut up and go back to sleep.

What Have We Learned? Maybe no one should ever get cosmetic surgery from anyone BUT Nassif or Dubrow.