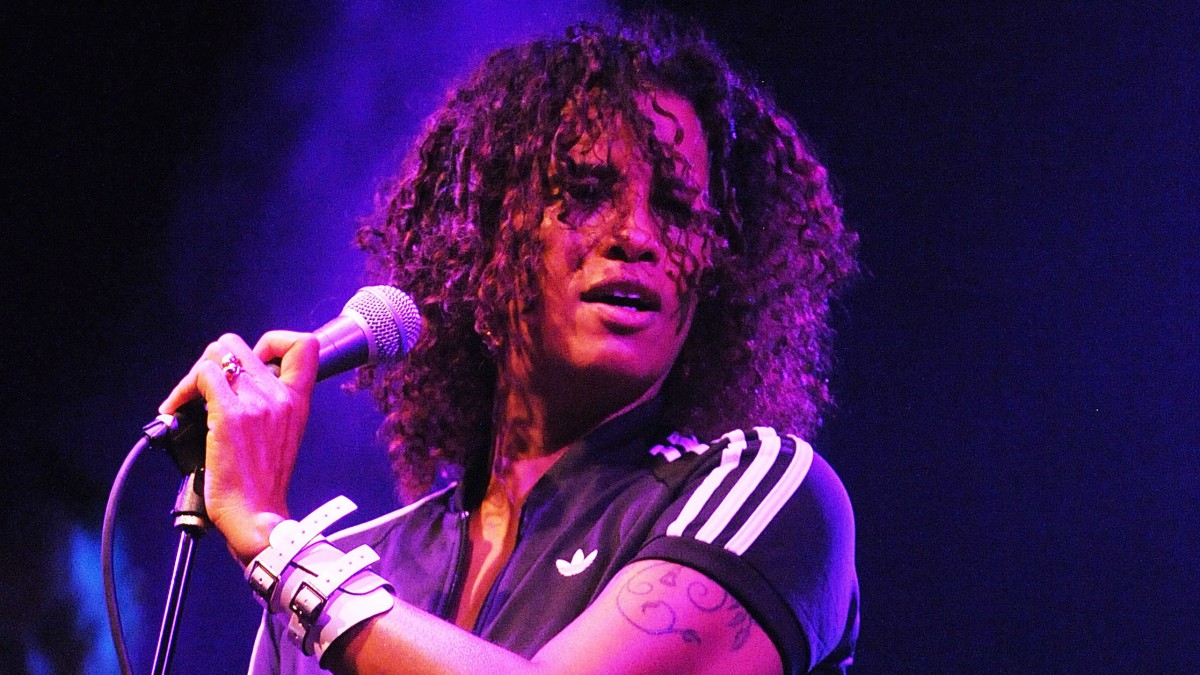 On Friday, Neneh Cherry took the stage at the Highline Ballroom in New York City, bringing with her the radiance — and the clothes — of 1989. She wore a black track jacket with white racing stripes and a black skirt with crunched ruffles. She put her hair up, but when she danced, the curls swung loose and danced with her. In appearance and demeanor, there was little difference between this woman and the one who, 25 years ago, lost the Grammy for Best New Artist to Milli Vanilli. Her fellow nominees then were Soul II Soul, Tone Loc, and Indigo Girls. Cherry was arguably a composite of them – a rapping-singing Englishwoman whose storytelling feminism made sense in nightclubs.

What made her a star in 1989 and into the mid-1990s, on two very good albums (1989’s Raw Like Sushi and 1996’s Man) and one great one (1992’s Homebrew), was her sexual power and the weird combination of sounds that, in her hands, were independent of genres. All kinds of music passed through Cherry, as it did for the new acts at pop’s vanguard — not only Soul II Soul and, yes, god forbid, Milli Vanilli, but also Technotronic, Black Box, Fine Young Cannibals, and the overdue-for-a-major-reassessment house act Deee-Lite — artists, mostly from Europe (specifically England), who influenced the multiethnic and biracial collapse of dance music into rock, hip-hop, and soul. Cherry channeled the sounds of everyone, but she did it in order to be like virtually no one else, with batches of songs about the virtues of independence and exasperation with the fecklessness of deadbeats and potential baby daddies. She has moved in and out of punk bands and jazz trios, but her music has always been this existential search for inner and outer peace, as a lover, mother, and citizen of the world.

In the U.S., the persona Cherry cultivated was one of both insider and outsider. Visually, this made her striking. Her bomber jackets and spandex pants and door-knocker earrings were kind of ghetto before “ghetto” was fabulous. The fabulous began to arise from performers like her. She was all over MTV and obviously “of color,” but mysteriously so. What was with that British accent in her biggest hit, “Buffalo Stance”? Was it a shtick like Dana Dane’s or real like Slick Rick’s? (Her mother is a white Swede, her biological father a West African drummer, and her stepfather, the trumpeter Don Cherry, is African American, and she grew up all over the planet but settled in London.) The music was urban in a way that combined the club and the streets — full of chicas and sistas, songs for and about them.

But “Buffalo Stance” was the kind of single that can obscure an artist’s much vaster brilliance. If you were a kid when it came out, Cherry gave you a suggestive nursery rhyme whose words were fun to say: “gigolo,” “sucka,” and “buffalo.” The song glides seamlessly in and out of styles while remaining fixed to Cherry’s energy. Its catchiness leaves you singing the backing tracks and turntable scratches, an experience akin to licking your plate. If a song is going to define your career, that’s not a bad one to have do it. Cherry told the New York Times pop music reporter Joe Coscarelli that “Buffalo Stance” still pays her rent. And if you’re the Spice Girls or Nicki Minaj or any number of “fun” artists, some of that song and some of Cherry’s music in general has paid a little bit of yours.

Last winter, she released Blank Project, her first solo album since Man. Its 10 sophisticated, stripped-down electronic songs are like a demolished wall of sound that Cherry, her producer Four Tet, and her backing band, the brothers Ben and Tom Page (a.k.a. RocketNumberNine), meticulously rebuild using only half the original materials. The songs start simply and are stirred into a thicker simmering roux. You think rock and roll. But you also think jazz.

On Friday night she was fully invested in the album’s songs. With an exception or two, they were the only ones she performed. This was Cherry’s first ever solo show in New York City. (She was all set to perform in 1989 but famously came down with Lyme disease, which, at the time, seemed so new we called it Neneh Cherry disease.) The packed house seemed to know it (maybe they read it in the Times), and the anticipatory energy seemed high. The house lights were dim for maybe four or five minutes before Cherry and the Page brothers took the stage, and the wait seemed to leave people absurdly affronted. “Come on, Nina!” someone shouted. “It’s Neh-NUH, asshole,” someone else shouted back.

At a scarcely detectable 50 years old, her rapping remains formidable. Her singing voice wavered at the high end, but that seemed to be more from a kind of disuse than from age. The longer she performed, the looser everything got. When the power to the keyboards went out, Cherry became a backup generator and improvised a rapped nursery rhyme that sounded like something she might have sung when she was a teenager in the band Rip Rig + Panic (their sound was like Tom Waits and Fishbone on a sinking rowboat). It was an exhilarating show by an artist who appeared to be rediscovering herself, who seemed surprised by the notes she couldn’t hit and the notes she could, by all the sexiness and swinging and dancing she still had in her.

Blank Project proceeds with muscular grace. It’s about how to live in the world and alongside other human beings. It’s full of mantras and emotional chants and wishes for peace. But there’s unease in its optimism (or hopefulness, anyway) that, in concert, approximates punk’s agitation. On the title track, she repeated “I love you / I hate you” until their values converged into what Annie Lennox would call some new emotion. Her lyrics were evocative and navigable, and you could feel the crowd absorbing the words, responding to them.

By the time she left the stage, after little more than an hour, she’d referenced Donny Hathaway and Sun Ra but very little of her incarnation of 25 years ago. Jazz collaborations and experimental pop are where she is now. It’s possible that songs like “Kisses on the Wind” and “Buddy X” no longer jibe with Cherry’s sense of equilibrium. Of course, it’s not as though imbalance was ever a trademark for her.

But then she and the Pages returned to the stage, and they did it: They played The Hit. It now had a stuttering beat, and the looping keyboard trickle that runs under the track was like everything in this show: thicker, deeper. “Buffalo Stance” doesn’t have the introspection of “Dossier” or the beautiful prayer for serenity in “Everything,” her new music. But what if a song played live is just full of whatever the woman singing imbues it with? Cherry made it of a piece with where she is now, musically and spiritually. “Fuck nostalgia,” she said as the song started. “We move forward but we take what has been with us.” Hopefully it won’t take as long for her to come back to New York. Maybe she’ll even bring the rest of what’s been with her.

A Civilian’s Story: How J.C. Chandor Inverted the American Crime Saga With ‘A Most Violent Year’