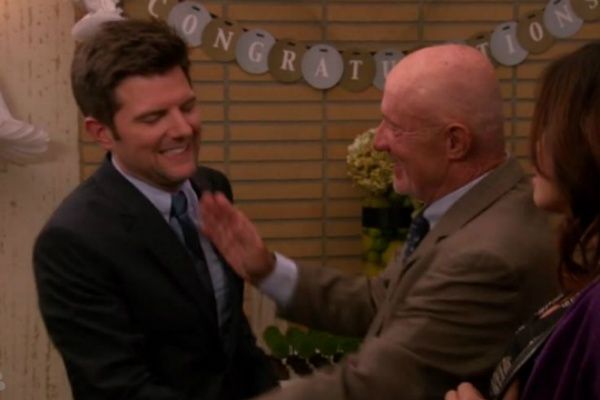 Watching NBC on Thursday nights in the fall of 2012 can be a dispiriting, depressing experience. The lights are flickering and there’s a chill in the air. From week to week, you never know who’s going to show up, old friends or those annoying neighbors from down the block. Once the crown jewel of a proud network, Thursdays have fallen into deep disrepair. Worse than disrepair, actually: disregard. If it were physically and morally possible to broadcast nothing but the The Voice five nights a week, interspersed only with union-mandated feeding breaks for the talent (Christina Aguilera prefers the mango-flavored peacock gruel) and action shots of Matthew Perry firing crossbows with the cast of Revolution, network president Bob Greenblatt would do it in a heartbeat. Faster, actually. Those heartwarming Whitney promos aren’t going to produce themselves.

So it’s hard to blame the mighty Parks and Recreation for retreating into a bunker mentality. As discussed repeatedly in this column, this season the critically adored, audience-ignored series has found itself in a positively Cheers-ian middle age. It’s the rare sitcom without a foil: All of the characters are not only delightful, they are actively and wonderfully in love with each other. This is a tricky place for television, a medium that feeds off conflict as much as the diamonds Andy wishes Leslie were wearing. But Parks’ crack writing staff has a remarkable ability to gin up misunderstandings and mayhem without ever going negative — it’s a warm and fuzzy skill political shark Jen Barkley might not appreciate, but the remaining viewers certainly do.

And make no mistake: It’s the remaining viewers who Parks and Rec is now actively servicing. The show’s long-term future is more imperiled than a bacon-wrapped shrimp in Ron Swanson’s sight line. Despite some conflicting reports, it appears that it will receive a full 22-episode run for this, its fifth season. But anything beyond that is, at this moment, as far-fetched as Ben Wyatt’s Star Trek fan-fic. This finality is reflected both in the rise of fan-servicey moments — Donna live-tweeting movies in a suspiciously Retta-like manner, the genetically impossible but visually irresistible stunt-casting of Breaking Bad’s terrifyingly blank Jonathan Banks as Ben’s dad — and the rush toward emotional resolution.

Now that the characters are all in loving, accepting tune with each other’s foibles, the pressure is on to pair them up and settle them down in a satisfying way, particularly with the end looming. This makes good sense, and I’m in the tank for Parks enough to want happiness for its fictional creations as much as they want it for themselves. But to me, most of the good work “Ben’s Parents” accomplished emotionally came at the expense of the comedy. As thrilled as I was to see Mike Ehrmantraut again — and expecting a playmate for little Kaylee! — his appearance was essentially one-note: He is scary and implacable. (Although, to be fair, I found him far more terrifying talking about Twizzlers than meth distribution networks. Blame my lack of a sweet tooth.) While he and Glenne Headley sniped over champagne flutes, Ben and Leslie kept up their heartwarming but drama-dampening existence as the world’s most perfect, if nerdy, couple. I respect showrunner Mike Schur’s commitment to the deep sense of decency, affection, and respect that defines the Knope-Wyatts. But after a while, all of the hand-holding and backseat make-out sessions can feel claustrophobic, like being swaddled head-to-toe in a “legitimate” unity quilt.

I also had nits to pick with Chris Traeger’s tear-streaked attempt to find balance between the awesome and the horrible — or, as April and Andy would have it, between Dave Matthews Band and Dave Matthews Band. With Parks‘ intramural game of romantic musical chairs almost settled, are we meant to be rooting for Ann to take him back? Or just to poison his spirulina smoothie? Enough with the tears, let’s see Chris really hit bottom. I wouldn’t object to seeing him endure a supplement-free weekend of wood-splitting at Ron’s cabin. The natural fats found in the offcuts of freshly slaughtered venison ought to cheer him right up.

Thank goodness, then, for Tom’s growth, from Amanda Bynes side boob to a more business-friendly Safe Search. Not only did this provide the episode’s biggest LOLs — mostly thanks to the transcendentally douchey presence of Ben Schwartz’s Jean-Ralphio — but it also continued my favorite thread of the season, the unlikely father-son dynamic between Luddite Ron and Tweeting Tom. Thanks to relationships like this, Parks remains as warm and cozy as ever, even in the midst of some truly frightful conditions. It just feels slightly odd — and unfortunate — that it’s settling its affairs right when it should be settling in for the long haul.

Like Kevin Malone with the cookie jar of his dreams, it appears there is no bottom for The Office. In its final, utterly unnecessary season, the once-proud show flits on the surface of both jokes and character development. It’s as if the entire cast and crew were so focused on what they’ll be doing next that they’ve lost the ability to engage in what they’re doing now.

As far as pranks go, Dwight’s radio interview was perfectly reasonable. In addition to being a fine showcase for Catherine Tate’s actually quite considerable comedic abilities (although it’s awfully damning that her fake radio host was infinitely more appealing than her day job as Nellie Bartrum), it gave Rainn Wilson a chance to unravel instead of preen. The Office has never really been about getting work done, so I’m not sure why the total lack of interest in selling paper bothered me so much this week. I’m probably projecting: I’m so sick of spending time with these people I can’t help but think they feel the same way. If there’s nothing to do beyond easy mockery and helping your boss with his family finances, why not take a day off? Go for a drive? Meet someone else? I hear the Anthracite Museum is lovely this time of year.

Of course, Andy and Erin did go on a road trip, but it didn’t provide much fresh air. One day poorly graded dissertations will be written on the strange attitudinal peregrinations of Andy Bernard, from competent preppie to rage-filled cartoon, from sympathetic dope to obnoxious asshole, often within the very same episode. Here, we were meant to sympathize with his sadness over the loss of a yacht and feel what, exactly, about his confrontation with the ginger deckhand? Resentment? Appreciation? Soul-crushing ennui? Either way, the rough plot machinery grumbled to life long enough for Andy to choose a Nuno Bettencourt–soundtracked life at sea with his relapsing brother (a game Josh Groban) over the girlfriend he very recently drove thousands of miles to retrieve. I’m sure Erin and New Guy No. 2 will be very happy together.

As for the Oscar/Senator/Angela thing, in a word: yikes. The fact that Kevin laughed uproariously at what actually is unspeakably cruel and life-ruining behavior on the part of his colleague suggests that those steering the story sailboat are as clueless as he is. A few years ago I would have trusted The Office to navigate the thorny realities of such a messy turn of events. Now I wouldn’t trust it to drive me around the parking lot.

Get Your 'Say Hi to Your Decepticon for Me' Jokes Ready: Mark Wahlberg Now Officially Doing Trans4mers