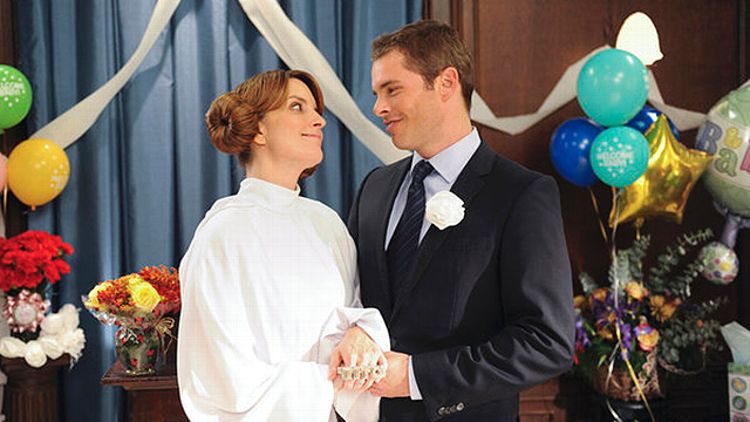 In the end, it seems, Liz Lemon really could have it all. The respectful relationship, the professional success, the wind-battered face of a New England cod fisherman. Proving herself, society, and Anne-Marie Slaughter wrong, last night Liz married Criss Chros, her marzipan candy man. The ceremony, held at midday in City Hall, was a typically Liz affair: Dennis Duffy brown-bagging (and black-sonning) it in the corner, a tuxedoed Jack Donaghy reading Ayn Rand, Tony Bennett. It was the lovely capper to a remarkably warm and generous episode of 30 Rock, a sitcom that usually follows its cartoony muse down some prickly rabbit holes, but last night showed real heart. (The only echo of that Seinfeldian fealty to the joke above all else was with poor Shanice: Not only would Criss not sit on her hand, she’ll spend the rest of her life unmarried, working in the chapel.) “Mazel Tov, Dummies,” written by Tracey Wigfield, but with Tina Fey’s Pringles-stained fingerprints all over it, was a celebration of idiosyncrasy all around. From Tracy’s embrace of recklessness to Jack and Jenna’s grappling with their true value, the episode suggested that happiness is always possible. It just depends on whose rules you’re playing by.

Of course, most “event” episodes are graded on a curve, particularly when they provide happy bursts of fan service for long-maligned characters. But the real skill in “Mazel Tov” lay in the sly manner in which it navigated a third way for TGS‘s pop-culture-soaked protagonists. For Tracy, it was a series of surprising — and hilarious — collisions with taxi cabs that caused his subconscious (in the handkerchiefed form of Harriet Tubman, global surfer, as played by a corncob-licking Alec Baldwin) to give him permission to own sharks and hug them too. Tracy — happily married, father of three — isn’t himself if he’s forced to give up his piranhas and subsist solely on bathtub juice. Better a short, full life of ill-advised, blimp-scouted period pieces than a long, sunblocked slide into old age and boring mediocrity. Living like a crazy person isn’t a sentence, it’s a choice. And an equally empowered Liz wasn’t forced to choose between her love for Wedding Bitches and her desire to go bra-less. Every girl wants to be a princess. It’s just that some of them want to be Princess Leia.

Some special kudos must be saved for the wonderfully game (and, apparently, fertile) James Marsden, whose Criss is the real-life Saul Rosenbear to Liz’s perpetually “Ack”-ing Cathy. Marsden sells every scene he’s in with a Broadway actor’s panache and a simpleton’s grin. Both he and Adam Scott on Parks and Rec are doing phenomenal work in what could be thankless, traditionally “girlfriend” roles: the chipper, elastic companions of demanding people with gargantuan personalities. (As for the always amazing Dean Winters as Dennis, what more is there left to say? “Ergo! Affleck’s finally gonna get that Oscar” was the hardest I’ve laughed since the “Jenny From the Block” video.)

But in the end, this was Liz’s episode, just as it’s been her series. I feel like I need more than 12 hours to reflect on one little back-and-forth with Criss, just before he found her wedding photo album hidden underneath her underwear ball. “It’s OK to be a human woman,” Criss told her, patiently. “No it’s not,” she replied. “It’s the worst.” What was particularly sweet about 30 Rock last night is that the cynical comedy writer was wrong. For once, the joke was on her.

Do you guys remember the rare, as-yet-uncurable malady known as “senioritis”? It preys on teenagers, usually in the spring of their 18th year. Its symptoms include loss of focus, a dangerous spike in hookups, and a pathological desire to cover every available car window with soap-writing. Anyway, judging by last night’s episode of The Office, it seems that high schoolers aren’t the only ones who can succumb to this dread disease. “Pam has ceased caring,” Dwight sneered at the sight of Mrs. Halpert in a ratty sweatshirt. But she was hardly the only thing that was baggy. “The Target” was, by all normal television metrics, a mess, full of inconsistencies, inanities, and enough tonal shifts to suggest a need for medication stronger than whatever Nellie’s currently taking. But there was also an enjoyable looseness to the episode, a devil-may-care summer’s-coming-and-we’ve-already-gotten-our-kids-into-elite-private-schools-in-Malibu aura of WTF that I found sort of fun.

As Creed’s business-casual look (in sweatpants) proved, this type of sloth can actually be funny, too. But that requires overlooking a lot, particularly the weirdly mean-spirited hash the show made of Oscar’s New Normal–ing of Angela’s husband. Both of the actors gave it their all — I thought Angela Kinsey did more with her face to communicate her character’s very real hurt and shame than the script managed to accomplish with words — but this was still a very dark, very adult story line for a show in the process of phoning it in. It crosses a line that the American version of The Office — with its emphasis on the workplace as family — had never even approached. But I suppose the real purpose of the cuckoldry was to drive the cat lady back into the pasty arms of the beet farmer. And in that regard, it was successful. Now, did it make even the slightest bit of sense for Dwight to have a receipt-happy hit man (wonderfully underplayed by Chris Gethard) on speed dial? Of course not. But nor was it plausible that Dwight would parade around naked in front of the show-within-a-show cameras — the same cameras he blithely dismissed in Trevor’s minivan with a meta wink (“this documentary crew has been following our every move for the last nine years — but I don’t see them so I think we’re good”). The point was, I laughed.

Just as Dwight’s had “great success” defecating in a paper bag, so, too, does The Office improve when it actively stops trying. Andy sails off to the Caribbean? Sure! Jim takes Stanley and Phyllis on an endless, boozy lunch? Why not! (As we learned last year in Florida, anytime Stanley is allowed to get his freak on, good things happen.) Is Pam actively losing business in order to play a silly card-building game more or less plausible than the fact that none of these people has done any work at all for nearly a decade? Who cares! I suppose I could stand around critiquing everything, like the angry Asian warehouse worker, but there’s no need to keep shucking the show’s peas. Angela may be right about jazz being stupid (“They just play the right notes!”), but this was a weird, almost defiantly jazzy half-hour, and I kind of dug it. Particularly the bona fide insane tag, in which Angela and Dwight interrogate Toby about “where gayness comes from and how it’s transmitted.” (“What’s it called when two men entwine their penises? Is it called Red Vining?”) School’s nearly out for summer. Why not enjoy these last few moments with people we are definitely never going to see again?

Just like NPR, last night’s Parks was all about learning. From guest Dan Castellaneta’s patient explaining of just who, exactly, is the Batman (“a strong gentleman who fights crime nocturnally”) to Chris Traeger’s unintentional revelation that even stairs to nowhere can get you places, this was an episode devoted to character advancement, not hilarity.

Which is fine. I’ve written plenty already about how Parks is the rare sitcom that’s perfectly enjoyable when it’s not particularly funny. Instead, “Pawnee Commons” attempted the relatively heavy work of maturing the show’s most immature characters, Tom and Andy. The former conscripted more than half the office to help him convert a raccoon-infested storefront into the future home of Rent-a-Swag. Yet not even the festive presence of DJ Roomba could cover up walls the color of dried phlegm. It seems the experience with Entertainment 720 bankrupted Tommy Fresh in ways far worse than financial. It takes a pep talk from Ann (and a fat bankroll that wouldn’t be out of place in a Rick Ross video) to put the stutter back in his step and the Soulja Boy song back in his heart.

Better was the business with Bert Macklin — bored security guard — and his breathless pursuit of the irresistibly evil Judy Hitler (“the spoiled only daughter of Adolf”). I’m a sucker for any time Andy and April play dress-up, and this time it came with a moral: It’s time for Bert to hang up his shades. (The biggest laugh came from Bert’s faux-retirement ceremony, in which he was presented with a plaque — “I Was in the FBI” — and given time to reminisce: “Forty years undercover … I never even met my family.”) Like most heart-having humans, I’ve grown to love these characters and, as with Liz Lemon at the altar, I want only the best for them. But the noble advancement doesn’t always make for the best viewing. Especially when the silly and the sweet are kept at such a strange distance: Leslie and Ben’s idyll in Eagleton came with plenty of smart, small jokes (the palm trees, the “balloon artisan,” calling boogers “Pawnee caviar”) but was ultimately frustrating. As pleasant as Brad Hall was as civic-minded architect Rustin, I didn’t quite get what we were supposed to make of him. Was he genuinely not responsible for the drool buckets (“for your more slack-jawed citizens”)? Do we care? Parks is at its best when its heart and its head crash into each other — as when Andy burst into the meeting yelling, “Have you guys seen Hitler?!?” — not when it plays around on the border.

I suppose we could talk about how “The Game of Life” was an admirable, if unwatchable, attempt at addressing Up All Night‘s fundamental flaw: Its main characters are shrewish, judgmental, and cold. We could muse on how Ava’s yoga-filled life by the pool in Palm Springs not only makes sense for a character that feels as appropriate to this show as a child singing “Summer Lovin'” to his mother, it also suggests a show that would potentially be much more enjoyable to watch. (Downward Dogs, coming this fall to Lifetime!) We could talk about how Christina Applegate’s energy-drink-fueled flopsweat and Will Arnett’s rictus grin are becoming more tragic by the week. We could talk about how insane it was that Chevy Chase managed to get himself fired from Community days before shooting what is almost guaranteed to be the final episode. (Can we wager on what, exactly, he did? Crap on the carpet? Fondle the monkey? Refer to himself as Judy Hitler?) Or we could just marvel in the fact that last night culminated in an egg race montage soundtracked by The Weepies. Multicam can’t come soon enough!

Video on Demand Report: Men in Black 3, Step Up 4, and the One and Only Sparkle