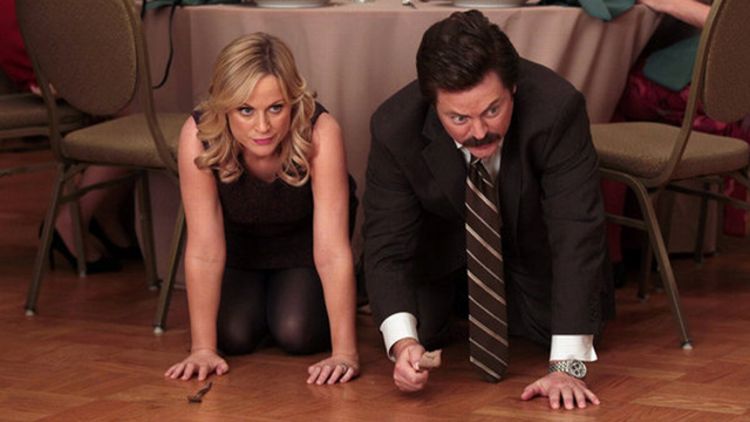 The normal metric for holiday behavior is, as Jim Halpert correctly argued last night, naughty or nice. But in terms of sitcoms, Dwight’s Teutonic table might work even better: Do we prefer our comedies to be impish or admirable? Particularly at this time of year, when the tendency to sweeten the eggnog — or at least avoid the fat-free kind — can be overwhelming. For Parks and Rec, this balance isn’t limited to December: The only time this most likable of shows stumbles is when its characters end up liking each other so much it muffles the conflict in a miasma of nondenominational good cheer. So it was particularly rewarding to discover that the excellent “Ron and Diane,” as written by Aisha Muharrar and Megan Amram, celebrated Krampus far more than jolly old St. Nick.

It helped, of course, that the episode was broken along some of Pawnee’s knottiest fault lines. The Tom-Donna-April axis is as close as you can get to mean girls on such a defiantly chipper show, and it was nice to see a new, financial wrinkle to their constant Jerry abuse — as well as some consequences. (Andy is exempt because even though he did laugh when the big guy guzzled some glue, he also forgot to wear deodorant. And one sock. Also, is there a bathroom nearby?) The best way to defang bullies, of course, isn’t bad stand-up (sorry, Man Perkins), it’s unflappable positivity. And in that regard, Jerry Gergich is nearly Leslie Knope’s equal. Jim O’Heir doesn’t get much ink, digital or otherwise, for his supporting performance, but he slays with whatever material he’s given, whether he’s having hot-beverage-related issues at work or locking himself out of his own party. (It’s also a credit to the Daniels/Schur school of tailoring the part to the performer; the same thing is happening with the live-tweeting, attitude-flashing emergence of Donna.)

But Jerry works best not as a loose and reactive speed bag, but more as an implacable tackling dummy, able to use his bulk to repel all of April’s surprisingly weak-armed attacks. His quiet suburban contentment — aided and abetted by an Amazon convention of gorgeous blondes (including the stunt casting of the year with Christie Brinkley as his devoted Gayle) — is the perfect antidote to a cavalcade of Haverfordian swag and snark. The happy guy can take the ribbing because, sure, he’s got the extra padding, but he’s also the one who’s actually happy.

The A-plot, featuring the return of Megan Mullally’s inspired lunacy as Tammy No. 2, was equally delightful, primarily because the lascivious librarian provides a welcome opportunity for the usually polite show to get nasty and pixelated for a change. The actual turn — that Lucy Lawless’s unflappable Diane was actually flapped about Leslie’s emotional intimacy with her man, not Tammy’s carnal knowledge — stuck out to me like a misaligned doorjamb on an otherwise well-restored Colonial. (I’m trying here. Unlike Ron, I have no idea who Christian Bexfort is, nor do I care.) But it was worth it for the payoff: Ron getting over his giddy fanboyism at the woodworking awards (where his “Chair” defeated “Chair” and also the surprisingly competitive “Chair”) and sharing the non-French bits of himself with his new lady love (and not just himself, either: Duke Silver, too), not to mention the super-hot Dumpster fight between Leslie and Tammy.

Parks always impresses me in the way it more than meets the criteria for all classic sitcoms (bunch of lunatics who only make sense together) but never stops pushing past them. All of the employees are reasonably content, but none of them, outside of pension-minded Jerry, is truly satisfied — an important distinction, I think, and one that gives the show its unique momentum. Tom is funnier because he’d kill for a life like the Gergiches. Ann is the smartest one in the room and the least together outside of it. Leslie is at once Ron’s worst nightmare and his saving grace. And, this season, even the monotonous merriment of Chris Traeger has been pushed in an entirely logical — and incredibly welcome — new direction.

Most comedies would be content to have a cheerful weirdo banging on his one note, particularly if the player were as skilled at it as Rob Lowe. But, again, Schur doesn’t settle for the simplistic cartoon and instead lets it get weird. I’d argue that Chris isn’t as easy to summarize as he was when he was a vitamin-popping, reality-denying ball of SPF-slathered sunshine. But he’s much, much more interesting as a graying, fat-dabbling lonely guy stuck in a committed relationship with his therapist, Dr. Richard Nygard. On a more static show like The Office, Chris’s nice friendship with Ben would be presented as antidote. Here it’s merely a first step. Belsnickel might disapprove, but in my book that makes Parks both impish and admirable.

I haven’t asked the big boss yet, but does anyone else think his Ewing Theory is somehow applicable to The Office? We’re now a few weeks into the absence of Andy Bernard — ostensibly the lead character — and the improvement is undeniable. As with the other recent, wildly half-assed successes, “Dwight Christmas” lacked not only a central protagonist but any central focus whatsoever. The reason it didn’t not work (double-negative definitely not unintended) was the way it let plenty of just fine things happen around the edges. It wasn’t a gem, but even without go-to holiday-episode writer Mindy Kaling around to polish it, it wasn’t the lump of coal I was expecting either.

The Erin-Pete relationship seems less inspired than prescribed, but The Office has always been good at filming the awkward stutter-steps toward love. Last night, not even the unimpeachable majesty of Die Hard could match the one little moment in which Pete did the movie theater arm move, was rejected, and then was accepted. Call me a sap, but this stuff works for a reason. And as I said last year: I would not watch another season of this gasping, stumbling show, but I definitely would tune in for the continuing adventures of Darryl and Jim in Philadelphia: bonding over the world’s best roast pork sandwiches, cowering in horror at the world’s largest colon. Ultimately, what kept me half-smiling wasn’t Toby boring Nellie into a kiss or the aforementioned former warehouse jock tackling the food table like a drunk linebacker, it was the gentler tending to a story that’s been there from the very beginning.

Of all the shows I recap, 30 Rock is unquestionably the hardest. Not the hardest to write about, mind you. I mean the hard (note: It’s not hard) work of actually recapping. “My Whole Life Is Thunder” — the title ganked from my favorite line of the night — had, and I’m guesstimating here, 74 jokes in the teaser alone. This means pausing the show like a 14-year-old boy during that scene in Fast Times at Ridgemont High just to catch throwaway gems like Reverend Gimp, “Hathanobody,” and Will Forte talking about the pointlessness of his asparagus intake.

As funny as last night’s 30 Rock was — and, trust me, any episode featuring Sue Simmons drinking is hella funny — the downside to the elevated jokes-per-minute rate was also on full display. As the show hurtles toward its finale, it’s ticking the boxes of major events like Brewster running through his millions. But some major life events are better suited to manic hilarity than others. Last week’s Lemon-Chros wedding was triumphant because Liz and Criss were allowed to marry like they lived: ridiculously and wishing they were on their couch eating Cheez-Its instead. But the same can’t be said for Jack’s apparently domitable mother, Colleen (played, as always, by the very much alive and absolutely kicking Elaine Stritch). The daughter of a German-killing civilian deserved a send-off, and it was the right move to push Jack into a new phase of adulthood (one that he has approximately three hours of screen time left to master). But the transition from laughs to tears was an awkward one, and I would have appreciated a moment to process or even type a note or two before Kermit showed up. Parks and Rec, with its quieter style, can do a fart-attack joke and still have us care about Jerry. 30 Rock, just moments after a character lost his mother? Not so much.

This was, I believe, the last episode of Up All Night I will ever have to cover in this column. (Unless I file something late or talk smack about Umami Burger in front of Mark Lisanti again.) So let’s not make this a bitter parting. The show is a mess and not particularly a hot one. Retooling it as a multi-cam doesn’t set my margarita maker to spinning, but clearly something has to be done, and if there’s one thing network development departments are capable of doing, it’s “something.” I thought Tim McAuliffe’s script for “I Can’t Quit You” was actually clever in its construction: Little threads from the beginning (Scott’s e-mail snafus, Chris’s heretofore unexplored olfactory capabilities) were woven through straight to the end. Otherwise, what struck me about the episode was that it seemed almost tailor-made to push my buttons, presenting a greatest hits of all the things that drove me nuts about this show in the first place. To wit:

Midwestern rubes for our frazzled yuppies to mock? Check.

The removal of any and all stakes to the degree that our four main characters are all unemployed and yet still living the same, ballet-class-taking, lentil-smoothie sipping, warehouse-renting go-go lifestyle they were before? Check.

Good-bye, Brinkley family! Good-bye, Ava, and whatever show you’re actually on! Thursday nights will not miss you. And neither will I.

Video on Demand Report: Spend the Weekend Watching Every Batman Movie Ever