NBC Comedy Recap: Two Shows Nearing the End Give Us What We Want, and What We Desperately Don’t Want 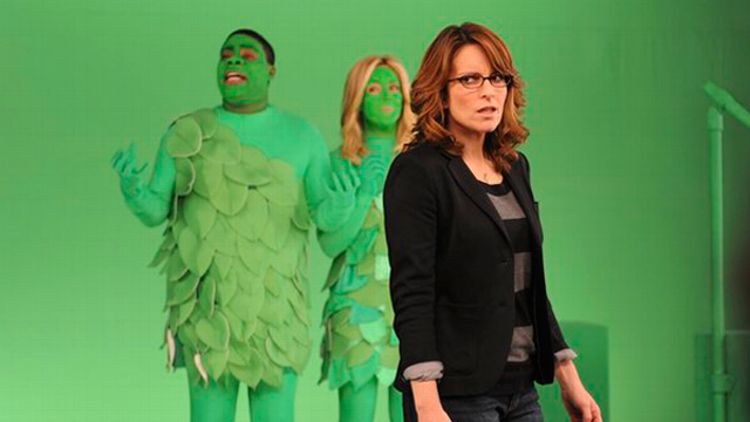 30 Rock and The Office are both ending this season, the former in just six days, the latter in four months. As a result, NBC’s once-proud Thursday-night comedy lineup has shifted from triage to hospice care. A sense of finality looms large over all four of the current shows. My sense is that Parks and Recreation is still likely to get a final half-season or so to wrap things up — it’s owned by NBC/Universal and an extra 13 or so would goose the total closer to a syndication-friendly 100 — but it feels like showrunner Mike Schur isn’t taking any chances. Last week’s bachelor party episode crammed in cameos from two Indianapolis Colts, the team owner, and a former Speaker of the House, all while planning for the biggest wedding Pawnee’s seen since the first Malwae married the widow Tweep. It may not be the end, but, like Ron Swanson at a pricey steakhouse, Parks isn’t leaving anything on the table. As for the wretched 1600 Penn? Well, everything about that overbaked butterball feels downright apocalyptic to me.

But 30 Rock and The Office have been and remain the big two, hall of fame shows that have bookended and defined an era of NBC comedy. When they go, the whole Thursday-night tradition goes with them. (I wonder if history will regard them through the same shifting lens as someone like Gorbachev: Sure, he presided over the dismantling of the world’s only other superpower, but gosh was that mark on his head funny while he did it!) So I found it particularly fascinating last night to see the two shows grappling with iterations of the very same plot — how does one balance work and family life? — in such drastically different ways.

After six and a half seasons of inspired lunacy, 30 Rock sucker-punched us with something even TGS‘s robot costume would recognize as genuine human emotion. Which isn’t to say “A Goon’s Deed in a Weary World” was sappy. Far from it. As written by Lang Fisher and Nina Pedrad, the episode was as dense as ever, with jokes packed more tightly than Tokyo subways at rush hour. (Or after hearing just how the NBC page program greets Japanese tourists.) There were highbrow jokes about fancy business words like “meeting” and “envelope.” There were sly jokes about how “women who try to do things sure get killed a lot” and how the Animal Practice monkey was actually funny, dammit. And there was the president of BroBody Douche, who wore one of those two-tone collared shirts and had a mounted arm on his wall like the head of a 10-point buck in order to maintain consistent high-fiveage. But what happened in the last five minutes, as Liz’s increasingly desperate — and douchey! — attempts to single-handedly save her show at the cost of missing the moment her newly adopted twins arrive at the airport, was both affecting and shocking. Not shocking in the way things suddenly got heartwarming, but in the way it revealed how, despite what Dr. Spaceman said that one time, the heart had been there all along.

Thanks to the giant brains behind the scenes and the titanic drive of Fey herself, 30 Rock has been able to achieve and maintain a balance that most sitcoms don’t even attempt: It is absolutely, 100 percent sincere in its insanity. Its worldview is the unholy combination of Jack Donaghy and Kenneth Parcell: Television is a ruthless, ridiculous, sputtering industry, yes, but it’s also plenty “magical” and “ruth filled.” The show has managed to completely reject the two dominant forms of sitcom storytelling — either nothing changes or everything does — and blazed its own way, refusing to sacrifice jokes for character but also, for the most part, refusing to do the reverse. (After all, as Kenneth put it last night, why melt the horse down for glue when it would be a terrible waste of horse meat?) Despite ample Dorito stains to the contrary, Liz Lemon has made tremendous progress as a human being these past few years — recovering from her trampoline accident, finding love, and readying herself for children. But none of this has made her less ridiculous or uptight; she’s still the butt of most jokes and absolutely unable to sit in an inflatable chair. She’s never going to be more Batman than the Joker, and there’s something kind of pure and wonderful about that: Fey’s vision of happiness and success can still involve pratfalls and not thinking “couch sex” is a thing. For once, a TV show is proudly telling us that improving doesn’t have to mean being “fixed.”

The twist last night involved everyone allowing Liz to walk away from TGS in the most TGS way possible — quitting in front of the Kabletown board. But one of 30 Rock‘s greatest gags was that TGS, with or without Tracy Jordan, was always a terrible show! What mattered, in the end, wasn’t the product, it was what happened along the way: the friendships made, the sandwiches eaten. Liz, like the goons at Dunder Mifflin — heck, like most of us — was fulfilled by the process, not the result. Seeing her united with her new family, a set of mixed-race twins (it’s possible, I saw it on Maury) who acted suspiciously like the stars of that upcoming President/Santa Claus movie, was hilarious and deeply moving. Like 30 Rock itself, Liz’s life got better because the important things stayed the same.

By way of contrast, The Office long ago picked clean whatever story bones remained. Now, as the show attempts to gin up drama for an ending two years overdue, it appears to have resorted to harvesting the marrow. It’s an impossible situation, keeping a beloved sitcom afloat like this solely for the sake of a network’s bottom line. And so I’m actually quite admiring of the effort Greg Daniels has put in this year after returning as showrunner. The idea of The Office — a show satirizing the impossibility of change — providing a compelling, overarching reason to invest in these people at this late date is impossible, and has been ever since the fatal mistake was made to elevate the unworthy Andy Bernard to the manager’s office. (Ed Helms, a good performer trapped in what has become a bad part, has been noticeably absent now for weeks while off shooting The Hangover 3; I can’t tell if it’s a net positive or negative for him that The Office hums along quite nicely without him.) So instead, the better moments in these last two seasons have been smaller ones, little smiles culled from the margins: Oscar advance-correcting people on how to pronounce “espresso,” last week, or Erin nervously repacking a crate full of pens.

But sitcoms, particularly sitcoms in their final weeks, demand substance and drama. And here is where “Customer Loyalty” stumbled. Yes, there was plenty of ancillary nonsense, Dwight and Daryl and Erin and Pete going through the motions in uncomfortable meetings, hewing closely to the funnier divots left in the carpet by Steve Carell. (Nothing has made me respect Carell more, by the way, than his recent refusal to return for The Office‘s finale. Leave Michael Scott in Denver. Let one character retain a shred of dignity, please!) But the meat of the episode concerned the comedy-free breakdown of The Office‘s one-time engine of normality, Jim and Pam. Jim, you may remember, is somehow reliving the go-go ’90s with a full-time (part-time?) unpaying job at an Internet start-up in Philadelphia. (You know it’s an Internet start-up because there are concrete floors and a lupine Ben Silverman prowling the halls. You know it’s TV — or the late ’90s — because there seem to be more than a dozen people happily toiling away for free.) Last night, the strain of the strange separation finally overwhelmed Pam: She accidentally doesn’t tape CeCe’s ballet recital, but for a good reason (she got the mural she’d been angling for), and then is aggressively dressed down by Jim. The words spoken here are rough and familiar for anyone who’s ever been away too long from a loved one. It can be awfully hard to tune your radios to the same frequency after a while. John Krasinski and especially Jenna Fischer managed tough, affecting work. When Fischer broke down, it felt bruised and real.

And then someone yelled cut and a conveniently cute boom mike operator named Brian — played by the same dude last seen skeeve-seducing Maya Rudolph on Up All Night — quietly consoled her. I yelled something, too, but it wasn’t “cut.” It was “bullshit.” I’ve said this before and now I really need to say it again: There is nothing remotely interesting about revealing the documentary crew! The format long ago faded into the background because otherwise it makes no sense: What sort of fanciful billionaire is bankrolling a nine-year documentary project about a paper company? And arranges remote shoots in cars, travels back and forth endlessly from Utica to Philly to the Spotted Pig, all without purpose or complaint? Not even Megan Ellison would whip out her checkbook for something this indulgent.

Look, I realize that the temptation to do something different was alluring, but to put the cameras in front of the cameras is far too much, far too late. The arrival of Brian would be unwelcome whenever it occurred. But introducing his patiently bearded face now highlights the outrageous fiction undergirding The Office at exactly the wrong time. After years of suffocatingly untroubled suburban bliss, Jim and Pam seem to be lurching toward some sort of reality-based confrontation. I’m sympathetic to the thinking behind this — it truly is the show’s last card to play — and it’s nice to see The Office attempting to pivot its cartoony characters back toward their more modest, relatable roots. Without Brian, I think I could have accepted it, even though, this late in the game, a burst of emotional authenticity feels as out of place on The Office as James Spader once did. But asking me to accept that there really has been a bunch of bored film-school grads filling untold thousands of hard drives with Pennsylvanian ennui? Sorry. The big reveal pushed me out just as the show appeared to be making a final play to pull me back in.

Songs of the Week, With Special Guests Bad Books