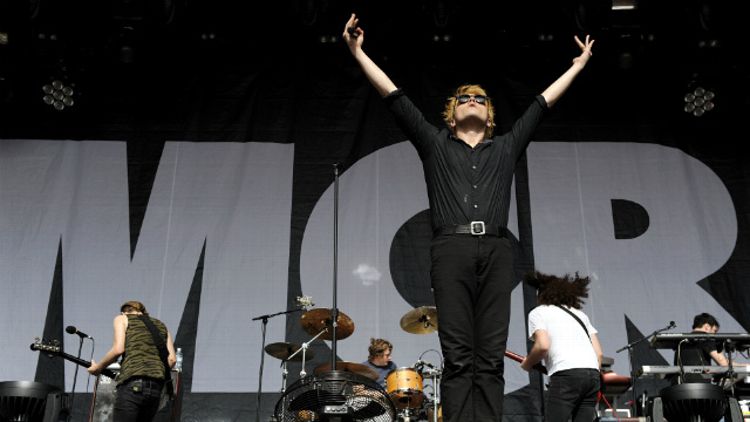 The first time I met Gerard Way was February 2003 in Chicago. I was fleeing a blizzard on the East Coast and profiling the Used, an up-and-coming screamo band from Utah whose singer, the maniacally disheveled Bert McCracken, was in the news for dating, then dumping, Kelly Osbourne. Gerard’s band, My Chemical Romance, was opening for the Used at the time and he and McCracken were well on their way to forming a chemical-based bromance of their own. One night the two kept me in the room with them until dawn as they drained the minibar, sent the concierge out for smokes, and made increasingly frequent trips to the bathroom. (Gerard later told me that bender was the inspiration for a song called “You Know What They Do to Guys Like Us in Prison,” which featured the lyric “do you have the keys to the hotel? / ’cause I’m gonna string this motherfucker on fire.”) Onstage, assuming they were able to stumble up to it, the pair were complementary as well: two stringy suburban weirdos peddling punk uplift bruised and blackened with mascara and talk of murder.

There were differences, though, too, and these were key to everything that followed. Flicking boogers and cackling like a banshee, Bert wore fame like a leather jacket. He flashed and strutted, naturally assuming the role of dangerous front man whether he had a mic in his hand or not. Gerard — a scared and sensitive wannabe comic-book artist who formed a band out of either depression or desperation in the wake of 9/11 — wore a leather jacket like a suit of armor. When I interviewed him in Brooklyn, a year later, for the release of what would turn out to be My Chem’s breakthrough album, Three Cheers for Sweet Revenge, he refused to remove the stinking, sweat-stained garment despite the rising temperatures and the concerned looks of the yuppie clientele surrounding us at the coffee shop. It was what he needed to become a rock star, he said, or at least to not feel like a fraud.

It was his costume, the first of many to follow, and it instantly set him apart from the schlocky flock of adenoidal whiners that flooded the charts — and kept me eating! — during the emo boomlet of the last decade. Where other bands bleated about their breakups, My Chemical Romance snarled. Gerard, his kid brother Mikey, along with guitarists Ray Toro and Frank Iero, refused to wallow in self-serving grief. How could they when they so clearly weren’t “o-fucking-kay”? They were misfits and dungeon masters, drama nerds and otakus. Most of all, they were performers, using light humor and heavy makeup to celebrate the majesty and ridiculousness of first feelings: love, death, the pain of piercings both literal and otherwise. They ganked attitude and artifice from Bowie and Queen, stole moves from the ’70s campfest Phantom of the Paradise, and dueted with Liza Minnelli. In the video for “Helena,” a Catholic funeral explodes into a goth Busby Berkeley review. It wasn’t a sing-along, it was a rallying cry. Plenty of bands had angst. My Chemical Romance had style.

Rock critics have long fallen back on superhero mythology to describe musicians; it’s a handy way to add grandeur to what tend to be fairly rote backstories, bending boring arcs of rehab and redemption into the Hero’s Journey, all in a quest to avoid quoting the drummer. But My Chemical Romance was the first group I covered that actually used that mythology for themselves. Gerard called his band “an idea,” labeled his fans an army. From album to album and show to show, MCR reinvented themselves across a multiverse of possibilities: They were soul-reaving vampires exacting revenge, the ghosts of a marching band returned to serenade you home, a gang of outlaw futurists using lasers and jazz hands to free the world from monochrome mediocrity. They had artistic ambition in a rock era that actively discouraged it, and they pursued it passionately without even a dash of irony. In that, they were just part of a great tradition of hardworking, self-made dreamers to emerge from the swamps of New Jersey, a wallet chain that stretches from Springsteen to Snooki. “We’re all about being the escape artists, throwing the fuckin’ straitjackets on, covering ourselves with chains and having somebody push us in the river. And then trying to get out of that,” a bleached-blond, clean-and-sober Gerard told me in 2006. We were sitting on a balcony overlooking Milan at the time, because the music industry was absurd back then and would fly you to places like that to interview people like him. “I think the world is ready for spectacle, for something big,” he said excitedly. “They’re ready for heroes, for something to believe in.”

Parts of the world were, anyway. The ravenous MCRmy spanned the globe, from Mexico City to Manila, a polyglot, multilingual militia that took solace in the band’s underdog triumphalism — and sometimes even took to the streets. I’ve never witnessed such intense fandom, before or since. Still, the resolutely black-clad supporters seemed skeptical of their beloved band’s slow progression into the light. 2010’s Danger Days was, to my ears, a glorious glitter-bomb of panic and disco, effortlessly mixing Detroit boogie with Weimar cabaret, summertime pop radio with Euroclub stomp. Gerard’s hair was a vibrant red — more Kool-Aid Man than arterial blood — and his new stage style was loose and breezy. The album eked out a platinum plaque, but its reception felt culturally inert, as if My Chemical Romance’s creative maturation had somehow skipped the groove of fight-or-flight survivalism that once grounded their fantastic excess. Gerard truly believed he was saving rock and roll by running around in the desert with a ray gun, but it was doubtful he could save his band from suffocation at the hands of a dying industry or the smothering embrace of fan expectation. He still believed in rock stars, but he also very much believed in Batman.

The last time I saw Gerard Way was in October at a comic-book convention in Las Vegas. His hair was its natural black but his mood was bright. He was in his element, there to celebrate his idol turned pal Scottish surrealist Grant Morrison. The event felt like a coming-out party for everything My Chemical Romance had screamed and bled about; it was a peaceful gathering of light-sensitive weirdos held in the shadows of the most garish place on earth. He and Mikey both talked animatedly about the sessions for their upcoming fifth album, which were well under way. But it did strike me that the larger battle had already finished. Gerard has a successful second career writing comics and movies and a pleasant life in Los Angeles with his wife and daughter. He’s free to doodle and daydream without worrying about the vagaries of record-label drama, the vast machinery required for global touring, or the fragile egos of increasingly far-flung co-conspirators. It turns out Gerard Way was the hero in his own story after all, and, unlike the “Patient” he played in the Black Parade, he wrote himself a happy ending.

He couldn’t quite manage the same for his band. My Chemical Romance announced their breakup on Friday night. They didn’t die in a gunfight or explode with the intensity of a million suns. Instead they just posted a note on their blog and called it a day. There’s talk of intramural squabbling and adultery scandals — feel free to Google; I’ve no interest in spreading the muck — but to me it feels more natural than reactive. What villains were left to face? What demons left to conquer? My Chemical Romance always aimed for the top, but the top no longer exists; all that remains is a vast, niche-y middle. Rock bands don’t want to be big anymore. Hell, if they’re smart they don’t want to be rock bands at all. In that, My Chemical Romance really were “The Kids From Yesterday,” the more or less last song on their more or less best record. “We’ll find you when the sun goes black,” Gerard sang, but I hope it doesn’t take that long for him to reboot. The thing is, I think the music industry needs a skyscraping fabulist like Gerard Way a lot more than he needs the music industry. For now, all I can do is take comfort in the fact that even Batman died once.