Ranking the Fan Base Breakups: How Heartfelt Was Your Departed MLBer’s Offseason Farewell Ad? 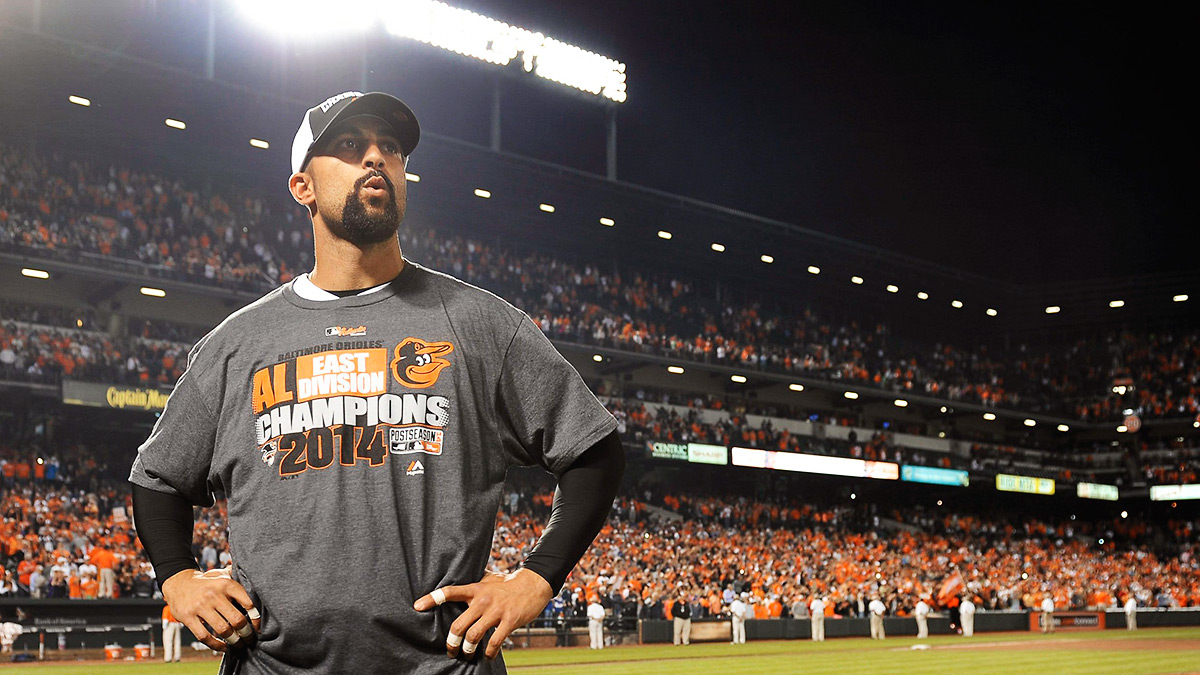 Put yourself in the place of a professional athlete who’s joining a new team after many years with another franchise. How would you thank your fans for their support while simultaneously easing the sting of abandonment? You could put out a press release, talk to a reporter or radio host, or address the crowd directly via social media. But talk is cheap — particularly when the intended audience is keenly aware of how much you’re making. There’s only one action that proves you’re more than a mercenary: sacrificing a minuscule percentage of your salary to pay for a full-page farewell in the largest local paper. It’s a proclamation of mutual sorrow, the most considerate, sincere-sounding way of saying, “It’s not you, it’s my massive new contract,” or “Sorry, but this just isn’t working (for the front office that controls my fate).” Forgo it, and fans will start to wonder whether you ever actually cared.

In an era when print media is suffering declining circulation, decreasing revenues, and increasing competition from free online outlets, the full-page farewell ad is doing its part to prop up our country’s paper publications. It wasn’t long ago that such ads were uncommon enough to be noticed by the watchdogs of aberrant athlete behavior. John Thorn, the official historian of Major League Baseball, told me he thinks of farewell ads as “a recent phenomenon,” and compared to, say, testosterone supplements or fears about baseball’s demise, they are: It’s much more common for stars to voluntarily change teams than it was before free agency, which means more farewell opportunities.

Of course, considering how far back baseball’s history goes, “recent” is relative. Player newspaper appeals aren’t new — in April 1983, Padres first baseman Steve Garvey saluted the fans of his former team, the Dodgers, with a full-page ad in the Los Angeles Times — but it seems as though they’ve become more prevalent lately. That’s partly a change in perception: In the past, local ads had limited reach, whereas everything in the Internet era is potentially national news. But it’s also easier than ever for players to pay for a page, since modern athletes make more money and newspaper ads aren’t as expensive as they once were. A full-page Sunday ad in the 1983 L.A. Times sports section cost $15,000 — $35,000 in today’s dollars. According to the Times’s advertising department, an equivalent ad in 2015 would cost only $25,800. And so, paradoxically, as newspapers have faded from the public eye, they’ve become a more popular option for athletes on the move — so popular, in fact, that retiring White Sox slugger Paul Konerko opted for a video tribute because (in the words of his wife) “everyone’s done the newspaper ad thing.”1

Newspaper hat tips aren’t like retirement tours; aside from the fee, there are no minimum requirements that a candidate must meet. The player doesn’t need to have spent a long time with the team, or even to have been good at baseball: Eric Karros broke down both barriers more than a decade ago, when he took out a full-page ad in the Chicago Tribune after playing for the Cubs for a single season (in which he was worth -0.7 WAR). The occasion doesn’t have to be a departure: In 2000, Jason Giambi took out an ad in the Oakland Tribune to thank fans for voting him onto the All-Star team. Nor are players the only ones eligible: Theo Epstein bought an ad when he left the Red Sox, and owners have taken out ads to explain why they aren’t actually evil. The farewell ad is an evolving form.

Some players — Josh Donaldson, Jason Heyward, Pablo Sandoval — have tried to cut out the media middlemen by circulating their own messages on Instagram or Twitter, but the Internet isn’t always swayed by their DIY words. The farewell has more emotional heft if it’s printed on actual paper, for a price — unquestionably the classiest method, and the most reliable way to reach baseball’s large offline audience.

This offseason brought us farewell ads from five players and one manager who changed uniforms after at least five seasons with the same team: Max Scherzer, Jimmy Rollins, Billy Butler, Ben Zobrist, Nick Markakis, and Joe Maddon.2 The crux of each message was the same — Just because I’m leaving doesn’t mean I love you any less — but the deliveries weren’t equally convincing. So because there’s no better way to assess someone’s true feelings than by dissecting a statement that has probably been pulled apart and reassembled (if not outright written from scratch) by a team of PR professionals, let’s rank the six aforementioned fan-base breakup letters from least to most heartfelt, factoring in word count, the number of replies to the embedded tweets that include “class” or “classy,” and any indications of a relatable human being behind the words. (The Personality and Sincerity categories below are on a 0-10 scale.) Whose farewell sounded the most sincere?

Max Scherzer thanks the #Tigers and their fans in a full-page ad in today's @freep. pic.twitter.com/5qj1H9gI4G

We know Scherzer is given to analysis and self-examination, and we know he’s capable of passion: Check out that clenched fist, that screaming mouth, that straining neck tendon. So where was that insight and depth of emotion when it came time for him to pump out a few sentences for the Free Press? At 49 words, Scherzer’s message is easily the shortest of this offseason’s notable farewells, and it offers the fewest specifics. Accomplished some amazing things? Had many unbelievable moments? Scherzer’s epitaph for his Tigers career reads like a grade schooler’s report about a book he never read. Nor does the copy convey any sense of the man beneath the snarling façade: The one-word mention of “Erica,” Scherzer’s not-pictured wife, is the ad’s only allusion to a life off the field. Sure, baseball is just business, but it isn’t supposed to sound that way.

Unlike the players on this list, Maddon — who initially expressed a desire to stay with the Rays and received extension offers — opted out of a contract that could have kept him in Tampa Bay through 2015. In the wake of Andrew Friedman’s defection to the Dodgers, Maddon’s decision to walk away (without another managerial job officially lined up) made his message a tougher sell, but the man can be persuasive.

If you’re wondering why the Cubs were willing to fire former manager Rick Renteria with two years remaining on his contract, risk a tampering investigation, and give Maddon $25 million, look no further than their new manager’s analytical, cautious uncoupling from a community to which he and his wife have non-baseball ties. Maddon evaluated the market: The Tampa Tribune and The Tampa Bay Times both have six-figure daily circulations. A full-page ad in either paper would have excluded a large percentage of Rays-rooting newspaper readers in one of the nation’s oldest states. So instead of running a full-page ad in one paper, he ran half-page ads in both, reaching many more readers for approximately the same price — another innovative Maddon move. In a few years, the rest of the league will catch on, and every manager will be blanket half-paging.

The ad itself is unremarkable. Praising Rays fans for their consistent loyalty lays it on a little thick, but the family photo and cursive signatures (in the Tribune version) impart a hint of the personal touch. Maybe LeBron can learn3 from this.

Butler’s ad isn’t adventurous; it’s almost Butler-ian in its lack of flash paired with passable production. The copy is pablum but the layout is clean, and cute kids are a humanizing asset to any farewell ad. It’s a safe play for par where a bolder player might have birdied. Mike Sweeney’s sounded better.

It’s rare for a farewell ad to remind the reader about the writer’s accomplishments. It’s usually assumed that the person holding the sports section will understand why it makes sense to mourn this player’s departure. (Probably a mistake in Karros’s case.) But Rollins has never been shy about touting his talent or his team, so his photo choice is fitting. And even though the image captures him at a moment of personal triumph, the ad is as much about reciprocal respect as it is about individual accomplishment: It’s not just the clapping crowd, but also Rollins’s arm raised in return.

Drafted at 17 and traded at 36, Rollins has spent most of his life with the Phillies, and his good-bye is a bildungsroman. He mentions great memories, but unlike Scherzer — who, admittedly, wasn’t with Detroit nearly as long — Rollins specifies what some of those memories are. He thanks ownership, but unlike Scherzer, Rollins saves that for the last line. The fans come first. I’m sold: Rollins wouldn’t have waived his no-trade clause if the Phillies had been even a little less awful.

Zobrist’s contract has long been one of the game’s team-friendliest deals, but the 33-year-old got more than his money’s worth from the Tampa Bay Times. His message contains almost as much text as the other five from this winter combined. Reading some sections of Zobrist’s farewell is like looking at the inscrutable inside jokes scrawled under someone else’s yearbook photo; at other times, it’s like eavesdropping on an inner monologue or walking into a private psychotherapy session. When Zobrist writes, “I want to publicly thank my teammates, every one of them,” there’s a credible threat that he might follow through.

The band starts playing Zobrist off after two paragraphs, but he stays on the stage for another 700 words. He thanks the front-office analysts. He thanks the stadium security staff. He thanks the beat writers. He recites more names than Rickey Henderson has ever known. Zobrist’s ad has a family photo and a handwritten nickname, but its greatest asset is its authentic voice: His treatise is too packed with personal references to have been written by anyone else, and it’s too long not to have taken some time.

Markakis misses the Orioles like an overly attached 10-year-old at sleepaway camp misses his mom. On December 10, one could have spread open the Sun’s sports section and, from one side to another, seen nothing but raw Markakis emotion. Markakis purchased two pages — either that, or the Sun threw in the second for free to fill some space during a boring Orioles offseason. The first page is for the fans, who sit resignedly in postapocalyptic Camden Yards, wreathed in hazy, Oriole-orange fallout. Markakis signs this vision of our terrifying future under his assumed name, David Mustard.

The second page begins with a bombshell: Markakis might be a Brave, but he’s still a Baltimorean. (Suck it, Atlanta.) And then Markakis, a self-proclaimed “man of few words,” reels off almost 500 more about how much Baltimore has meant to him, capturing all the soul-baring frankness of Zobrist’s farewell with none of the endless list of names. Maybe it doesn’t make sense to keep capitalizing “thank you,” but he only does it because he means it so much.

The images are almost an empathy overload. Markakis with wife. Markakis with cute kids. Cute kids with other cute kids wearing upside-down sunglasses. By the end, we’re on a first-name basis with the whole Markakis clan, and their first names look like they were written on an Etch A Sketch. I now know Newspaper Markakis in a way that I’ll never know Newspaper Scherzer.

If your favorite departed player didn’t take out an ad, just accept the terrible truth: He hated every second he spent with your team. He’s just too polite (or penurious) to say so.