My Bodies of the Year: Kim Kardashian’s Instagram Moment and 12 Unsexy Months 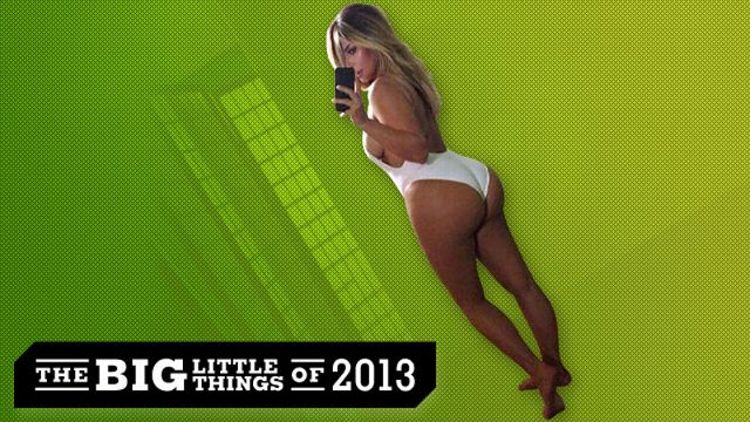 Part of my year and a lot of the previous one was spent at the side of a dying woman. Together we counted her new moles and marveled that her head was a good shape for baldness. We noted the other, less cute changes, too — that her arms and legs shrank, that her coloring had changed, that her middle became distended and never stopped growling.

Culture is my job. But during those months, it was also a vacation, for both of us. The woman was my mother, and the hours I spent studying and worrying about her body reached into the hours I spent watching the bodies of others. Part of what I saw was displacement. Part of what I saw was actually there. Popular culture supplies beauty — beautiful faces, beautiful places, beautiful bodies. This was the year that beauty turned to angst.

In the spring, Matthew McConaughey was the title character in the sleeper hit Mud, a child-friendly version of his chesty, robustly appetizing self. He was missing a piece of his front tooth but was hot nonetheless. By November, he’d shriveled down to nothing in order to play the accidental AIDS activist Ron Woodroof in Dallas Buyers Club. Maybe it was an awards-acting stunt. But it felt more cautionary than that.

That diminished body was the cost of all of Matthew’s McConaugheyness — the flirting, the sex, the self-assurance. He might win something golden for Dallas Buyers Club (as physical-transformation acting tends to), but, in the meantime, there was the image of a star famous for the beauty of his body suddenly acting with disturbingly less of it. The reason he’s so good in the movie is that he is oblivious to the difference. He doesn’t seem to know that he looks less like a peacock and more like a rooster. He was playing vanity while also negating it. My mother liked McConaughey. She would have loved him in this.

The lashings and lynchings and hurling of decanters in 12 Years a Slave? They were both shaming and vaguely cautionary. The camera showed us the ways in which the body has been used as a grim kind of technology and as an object of entertainment. Scars from whippings scab into a tree of scars. The director, Steve McQueen, shows a not-insignificant amount of sex, but you notice how powerless it all is: how, say, Michael Fassbender’s Master Epps is powerless to stop himself from rape and how powerless is his most frequent victim — Lupita Nyong’o’s Patsey — to make him stop. Complaints that the movie focuses on a so-called exceptional Negro were fair up to a point. But the movie’s ultimate lesson was hard to forget in the age of the African American president — no one can stay exceptional for long.

Not all the angst sprang from the tragic or the immoral. Some of it was vacuous but relatable. Two weeks before Halloween, Kim Kardashian stood behind a shoji scrim wearing nothing but a white bathing suit. She took a selfie and posted it to Instagram. Her posterior had been restored to pre-pregnancy bodaciousness. The previous months were full of self-doubt about whether this was achievable and what ravages carrying a child would reap on Kardashian’s body. The resulting selfie was a denial of insecurity. But you could feel her defensiveness all the same — “#NoFilter,” read the appended text. A month later, the world watched her gyrating topless on a motorbike driven by Kanye, her fiancé and the man responsible for risking her body’s ruin. The occasion was the video for “Bound 2,” a fiasco that nonetheless offered further proof that Kardashian’s hotness was back. The Instagram photo has more than a million likes. By Billboard standards, that’s platinum angst.

What was going on? Maybe it’s having spent 2013 fighting over whether the U.S. government should actually subsidize affordable health care. This was the year in which the movies never seemed to run out of ways to destroy the planet (or the White House). Perhaps the apocalyptic distress induced corporeal distress. Maybe we’re tiring of all the beauty and nudity. Katy Perry is. In October, NPR’s Scott Simon asked her what it meant to be a role model to kids.

Perry: I do see myself becoming this, whatever, inspiration out of default right now, ’cause it’s such a strange world. Like females in pop — everybody’s getting naked. I mean, I’ve been naked before but I don’t feel like I have to always get naked to be noticed. But it’s interesting to see …

Simon: Are you talking about anyone in particular or we can fill in the blank?

Perry: I’m not talking about anyone in particular. I’m talking about all of them. I mean, it’s like everybody’s so naked. It’s like put it away. We know you’ve got it. I got it too. I’ve taken it off for — I’ve taken it out here and there. And I’m not necessarily judging. I’m just saying sometimes it’s nice to play that card but also it’s nice to play other cards. And I know I have that sexy card in my deck but I don’t always have to use that card.

That was the thing about all the bodies this year. They refused to be sexy.

Shouldn’t Hugh Jackman have been the hottest thing we saw in a movie this year? He spent the latter half of the summer shirtless, at the Everest of fitness. But who left The Wolverine in love with that body? It was so much work for something that looked like so much work. It’s true that Jackman wasn’t Stallone in Bullet to the Head from the spring or the upcoming Grudge Match. In 20 years, though, Stallone is what the Wolverine has to look forward to: straining, bubbling grossness. We were used to our superheroes being born to resemble Henry Cavill in Man of Steel: lots of bulge, none of the angst. But it was the torture in Jackman’s body that was everywhere in 2013, the absence of heroism in all that definition, the freakiness. The movie’s plot actually involved an old, rich, dying Japanese man trying to steal Wolverine’s immortality. The old man’s attack climaxed with him inside a big, robot chamber — echoes of Iron Man 3 and Pacific Rim. But the man’s evil got at a sadder, more human fear than you get in comic books. Wolverine’s body wasn’t disturbing at all. It was progress.

A few months before, Michael Bay tried to make an American Dream farce featuring three juiceheads, two of whom were played by Mark Wahlberg and Dwayne Johnson. The movie was called Pain & Gain. It didn’t work. But it set the tone for the rest of the year. It wasn’t that Marky Mark and The Rock were merely mocking themselves. They were placing those famous, moneymaking bodies in the crosshairs of mockery, and even though Bay was the wrong marksman for the job, the attempt at shame was evident.

Part of the Rob Ford farce was his girth. If he smoked crack while being mayor of Toronto but didn’t look like he was being played by Chris Farley, would he have captured the world’s attention? Probably, but it might not have seemed as funny and as sad. No matter how fat and ridiculous any of us might get, we’ll never be as fat and ridiculous as Rob Ford.

Generally, we kept wringing our hands. We couldn’t even enjoy “Blurred Lines” without the hashtags. Critics of the video sensed an imbalance of power? That Thicke, Pharrell, and T.I. were cavorting, clothed, among models who wore only heels? That the video’s incongruous nudity brought out an allegedly rapey-ness in the song? By the time he performed “Blurred Lines” with Miley Cyrus at the Video Music Awards in August, he seemed ready for comeuppance. But no one remembers that, because before their duet, Cyrus surrounded herself with black burlesque dancers and tried to twerk. And, in doing so, the universal lament was that Cyrus lacked the adequate bodaciousness for legitimate twerking.

The shrewdest move anyone might have made in these times of bodily austerity might be by Scarlet Johansson. In Spike Jonze’s Her, she plays Joaquin Phoenix’s dream woman: the sort of smart, perceptive, sexy lady lots of men would be thrilled to have in their life. Johansson has seemed inextricable from her body at the movies (she could twerk). But in Her, that intelligence is artificial. You never see her. It’s just the sound of her voice, emitted from some kind of digital afterlife. She is fantastic. So is the movie’s operating system. Its potential moved me. I would wait for the version that speaks in the voice of someone already loved but lost.