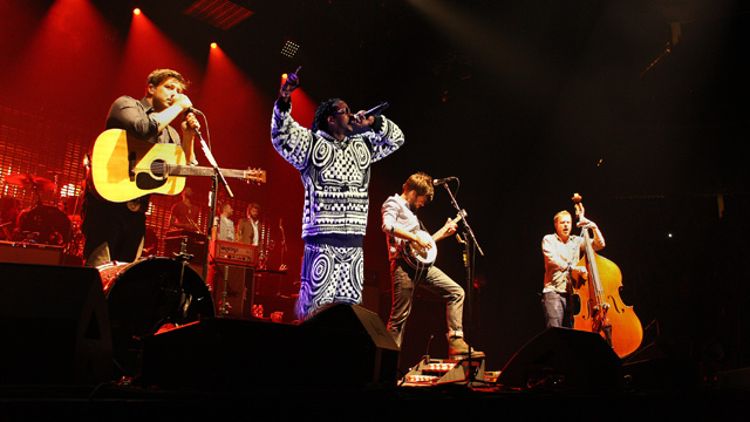 Now, this actually isn’t that big a deal, for a few reasons.

1. As far as besmirching the legacy of their creative partners goes, Linkin Park would have to climb a significantly tall mountain indeed to ever outdo Collision Course, the band’s um, mash-up album with Jay Z. I don’t mean to be unnecessarily harsh or anything, but one of the entities involved there once inspired David Cross to wonder, “Are these guys hanging outside junior-high girls’ gym lockers and writing down what they overhear?” and the other one is Jay Z.

2. The pairing actually isn’t as nonsensical as it first sounds. Linkin Park is the king of huge, unseemly genre pileups, but in that equation it’s the other guy, Mike Shinoda, who does the rapping, and Chester who does the screeching. On the new STP EP High Rise, out today, Bennington (who, apparently, is a longtime superfan of the band; word to Izzy Cole) proves perfectly fine at applying his squeal to some cock-rock guitars.

3. And the final reason this isn’t a big deal: Dumb music pairings are now, and have always been, a joy. This is rock-and-roll music: Leave your sense of propriety in the foyer, by those wet umbrellas and the photorealistic drawing of a horse!

In fact: We should not chastise Stone Temple LinkedIn Park, but take their crusade as inspiration. In other words: I took like seven and a half hours’ worth of 5-Hour Energy and tried to come up with other dumb rock pairings.

We start off slow, with one that actually probably would be incredible. As blasphemous as is it to suggest anyone but Robert Plant for the lip of the Led Zep stage, anyone who caught Ms. O doing “Immigrant Song” for Girl With the Dragon Tattoo knows she can more than handle the material.

Also, it’s important to remember that Zeppelin, at one point, seriously considered replacing Plant with Myles Kennedy, the very same Myles Kennedy who effectively replaced Scott Stapp when the Creed dudes started a new band. Oh, and why do they need a new front man, anyway? Because Robby “doesn’t want to make loud music anymore.”

Knockoff Scott Stapps. Non-eardrum-shattering volume levels. I think I speak for all of us when I say, What in the hell is the matter with you people?

In explaining the reasoning behind their recent hiatus, Mumford & Sons’ bassist Ben Lovett did nothing to dissuade us of the band’s generally staid reputation: “These [arena] shows take a bit more out of us. We have a bigger responsibility to be in better form. We can’t be dropping the set 20 minutes because [front man] Marcus [Mumford] has tired legs.” Tired legs? Tired legs? Jesus fucking Christ. This used to be rock-and-roll music.

So here’s what needs to happen during this hiatus: Mumford has himself a new son, and that son’s name is Tauheed Tity Boi 2 Chainz Epps the First. And it will be this proud libertine who finally shows this arguably most foremost of contemporary rock bands how to live.

This also makes sense because 2 Chainz already owns a fedora.

This being the Internet in the latter half of 2013, you knew Miley had to be in here somewhere. Truthfully, the Cyrus-assin would fit in perfectly well with any given rock band — by which I mean she’d fit in perfectly terribly with any given rock band. So I say let’s send her to Abingdon and have her teach an incredibly flummoxed Thom Yorke how to crush a Tennent’s Super and then place the empty can in front of his genitals, just so.

Madball is the seminal NYC hardcore band behind such potent odes to clannish fealty as “Friend or Foe,” “Down by Law,” and “Nuestra Familia.” And if there’s anyone else who so well understands the value of loyalty it’s Taylor Swift, who’s had her heart broken more times than there are hearts, or breakable things. Together, their bond will be insoluble. Also, a “mad ball” is what what you get when you put a billiard ball in a tube sock and use it as a weapon, which, like, you could see Taylor Swift having done?

Dave Grohl. Krist Novoselic. Ascendant teen pop idol Austin Mahone. Me and the rest of the Mahomies think this is a fantastic idea.