Miley Cyrus and Wayne Coyne Are Totally High on the Drugs, You Guys 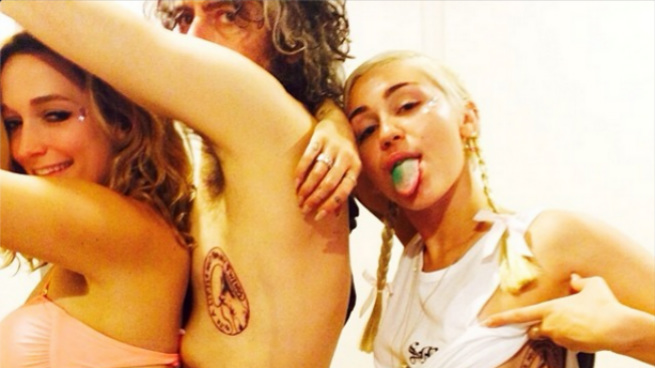 This weekend, in honor of our nation’s independence and this being a free country where I can do whatever I want, I unfollowed Miley Cyrus on Instagram. Don’t ask me how I’ve held on for so long, or why — if you’ve followed her at any point you know she’s prone to fill up your feed with multiple blurry takes of selfies featuring novelty grills and her friends in “ugly girl costumes” (HAHA no seriously, have you ever wondered what would happen if a conventionally attractive person, like, DIDN’T live up to arbitrary societal beauty standards?! VERY CHALLENGING) and inverted color filters to, y’know, look druggy and crazy and whatnot. (Side note: Miley has been very obsessed with the idea of bad teeth lately. I guess not having the money for dental work is the new “ratchet”! Or perhaps they were one and the same all along!) Scrolling through Cyrus’s Instagram feed is like getting slapped with two stale pieces of pizza repeatedly while someone yells “Y’AAAALLLLL” directly into your ear through a neon pink Echo Mic. You can understand why I tried to hang with it as long as I did.

What tipped me over the edge were not her stoner cosplay antics (oh, don’t get me wrong; she definitely smokes marijuana, but that doesn’t make it not cosplay) but her IG-fueled friendship with Flaming Lips frontman Wayne Coyne, which gives me icks that send me past the point of rationality. I’m sure they have a lot to bond over: cultural appropriation, the continuing struggle to convey general “trippiness” in the most staid and predictable manner, what happens when you’ve altered your brain enough chemically that your capacity for empathy has been permanently diminished. Also, Coyne , so he’s gotta get that millennial validation somewhere [ETA: Coyne is actually back on the ‘gram train.] But recently they bonded over something else entirely: their love of cinema.

The above clip is something called “Blonde SuperFreak Steals the Magic Brain,” and if you’ve got a lot to do today, maybe don’t watch it. Here are the Cliff Notes: It has a Moby cameo, and glitter, and nudity, and Miley screaming “fuck” and “bitch” a lot. There are some abstract walls of noise and kaleidoscopic patterns and a VW bug with a flower-power wrap. It looks like something made by people who want you to know how many “acid squares” and “marijuana joints” they are “high as drugs” on and how you can get away with being a white girl in a bindi if you are TOTALLY FUCKED UPPPP! “This is the video we originally intended to be for a song that has a reference to the drug LSD,” Coyne told Rolling Stone. Ohhh.

Anyway, I know that every person is a universe of feelings and motivations and we shouldn’t judge anyone by their social media presence, but I just still have this gut feeling like Miley Cyrus is not a very pleasant or kind person. And judging by the ratings for her NBC special last night, maybe more people agree with that sentiment than I would have guessed. It’s our pop culture media-industrial complex, we can ignore who we want to.

“Eric Jonrosh is a drunk who urinated in my sink when he came to our house for dinner, but damn he writes great miniseries.” "The first 'Spoils' miniseries beat the NFL and Big Bang Theory in ratings (adults: ages 74-92) and changed the way Americans talk, think and prepare meat. We anticipate this new series from Jonrosh with Steele and Piedmont becoming the most-watched television event in the history of Earth." -- Fill up your giant wine glasses and menace the server, IFC has ordered 'The Spoils Before Dying,' a 'Babylon' follow-up set in the "seedy underbelly of the 1950s jazz scene."