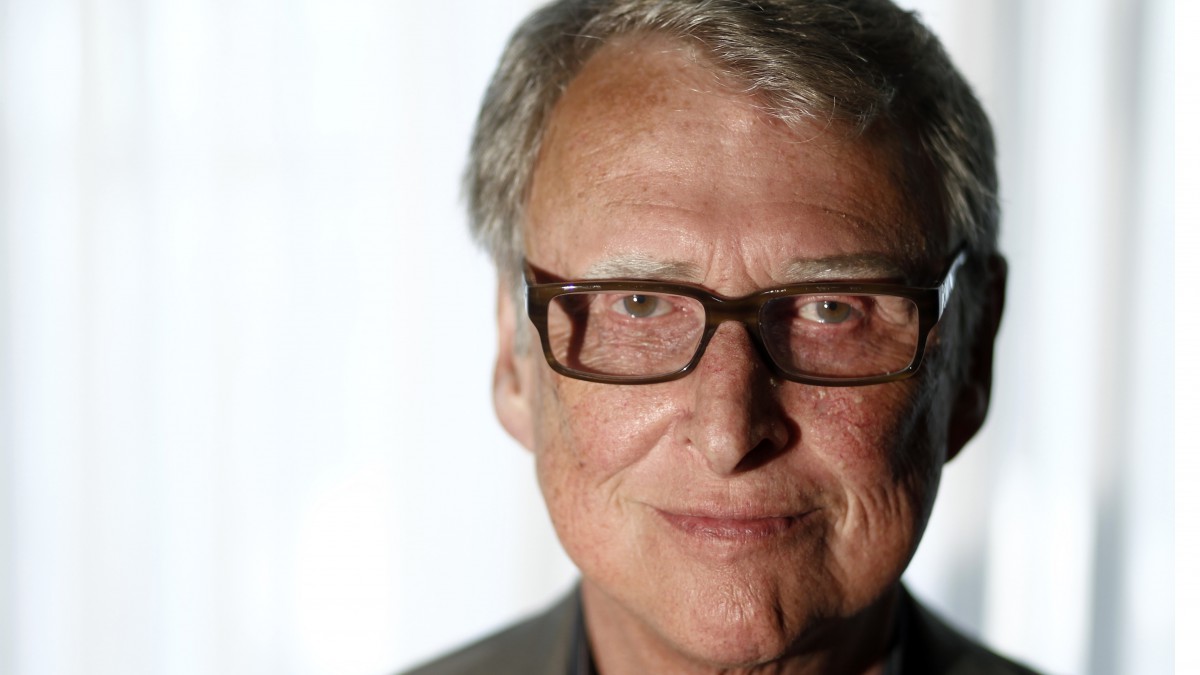 A couple of Sundays ago, while folding laundry, I was watching the Jets and the Steelers struggle to score. So I turned the channel and landed on an early scene from Working Girl, after Tess (Melanie Griffith) has begun pretending to be her high-powered financial executive boss. She’s seated at the boss’s desk, getting an earful from her friend Cynthia (Joan Cusack), who’s in on the ruse. They’re both secretaries from Staten Island, and Cynthia’s mad that Tess thinks she’s too good for everyone at home. Why won’t Tess listen to her cheating boyfriend? Does she really think she can get away with this? Why doesn’t she know she’s just a secretary?

Nichols died early Thursday. He was 83. And though it is a truism to praise the deceased by saying that we won’t see so-and-so’s like again, it certainly feels true of Nichols and his approach to moviemaking. He gave you what you wanted from a certain kind of film: the works. His movies were big emotional boulevards populated by performers who liked to act at 90 mph, using their hearts, souls, and eyelashes. Nichols knew what to do with great writers, cinematographers, and stars — your Elizabeth Taylors and Richard Burtons and Meryl Streeps and Jack Nicholsons and Robin Williamses and Julia Robertses: yield.

But less iconic actors were also at their very best with Nichols, in parts biggish and bit: Sandy Dennis, George Segal, Katharine Ross, Catherine O’Hara, Diana Scarwid, Cusack, Robin Bartlett, Patrick Wilson, Jeffrey Wright. He got memorable performances from Cher when she was still just a very famous singer, and from Dustin Hoffman, Griffith, Annette Bening, Clive Owen, Nathan Lane, and Amy Adams on their ascents. This is to say that there was surely much more to him than boulevards and a traffic sign.

Nichols began his career as half of a comedy duo — a brilliant one. From the mid-1950s to 1961, he and Elaine May worked in psychological fusion, exploring neurosis and sex in a way that was new, mold-breaking for both television and theater comedy. It was about collaboration and cohabitation. It was Method-y. They had to be flexible and generous with each other. Had Nichols and May kept at it, their comedy alone would have landed his obituary on the front pages. (She’s still very much alive.)

Nichols turned to directing movies and plays instead. It might be hard to grasp this now, but in the 1960s, Nichols was a star, a wunderkind. For directing. By the end of the ’60s, it’s sometimes said, he was the first director since Orson Welles to have complete control over his movies. That made sense. Who’s Afraid of Virginia Woolf?, based on Edward Albee’s play, and The Graduate, taken from Charles Webb’s novel, were earthquakes. Not financially, per se, but artistically. Nothing coming out of Hollywood at the time looked the way those movies did. Very little had the first movie’s vulgar viciousness or the other’s immoral hunger. They were statement films.

Consequently, Nichols was expected to become a statement director, to burn with ambition, to Speak to the Times. He certainly went for it. Catch-22, which Buck Henry adapted, seemed intended to make a splash. In 1969, when production began on the film, it was a major event. The biggest young director in America was adapting Joseph Heller’s wild war satire, a near-instant classic. Actors climbed over themselves for roles. It didn’t seem to matter which part they got; they just wanted in. Nora Ephron, who’d later write the script for Heartburn (and the novel from which it was adapted), visited the set in Mexico for the New York Times and came back with a vivid dispatch of the high spirits in the desert. The Nichols she found was in a state of introspection.

“It’s perfectly possible,” Nichols concedes[,] “that we can have this great time now, making the film, and then have it not be a good picture. The two have nothing to do with each other. But then, none of us knows whether the picture is any good even long after it’s finished, so you might as well be happy while it’s going on. And when the actors break up and the crew is stuffing handkerchiefs into their mouths trying not to laugh at Dick Benjamin — or whoever it is — I love it. I love it now. Afterward, it’s up for grabs anyway.”

Catch-22 was a fiasco. The book is virtually unfilmable.1 The movie also had the misfortune of arriving the same year as Robert Altman’s hit farce M*A*S*H. It was like two women showing up at a party in the same dress. Altman wore it better. M*A*S*H was set during the Korean War, but it used Altman’s ragged naturalism to get right to the heart of the Vietnam antiwar movement. The following year, Nichols followed Catch-22 with Carnal Knowledge, which Jules Feiffer wrote. It made waves, but didn’t succeed any better than Catch. In speaking to the times, it wound up shouting at us.

But Nichols kept making movies. In The Day of the Dolphin (1973), George C. Scott’s talking dolphins are trained for presidential assassination. It was not a comedy (not on purpose), but one of those Watergate-era disillusionment fiascos. The Fortune (1975) was supposed to be funny, and a lot of it was. Set in the 1920s, it featured Warren Beatty and Jack Nicholson trying to bilk a ripe, young Stockard Channing of her inheritance. That movie has its moments, but the period setting gives it a certain staginess. Nichols had better luck in the theater. The original 1977 Broadway production of Annie? He produced it. He also directed Neil Simon, Scott in Chekhov, and Jessica Tandy in The Gin Game.

You’re allowed to wonder whether anything would have been different for Nichols during the 1970s if, say, Dolphin had killed at the box office, too, or if he’d managed to get involved with something topical, like All the President’s Men or Kramer vs. Kramer, or massively appealing, like The Sting. But he didn’t need to. The great Hollywood movies of the 1970s were already influenced by him. The Graduate had opened a floodgate. Along with Arthur Penn’s Bonnie and Clyde, also from 1967, Nichols’s movie was a new, more immediate kind of pop filmmaking that ripped through Hollywood when the traditional studio system was all but dead. The sex, violence, and obscenity — the style — danced on its grave.

There’s an incisive bit in William Goldman’s lacerating Broadway book The Season, in which Goldman accuses Nichols of being falsely modest in accepting an award from what is now the New York Film Critics Circle. Goldman quotes Nichols, courtesy of Variety, this way: “ … as for the auteur theory of direction, this film was made by a group of people,” two of whom Nichols went on to name. “I can’t really tell you what I did,” Nichols continued. “I hope I did some of it.”

The Season is a knife block with the blades facing out. But I don’t hear that as a damning story. I hear it as one about a director who honestly knows The Graduate is a different movie without Sam O’Steen’s stab editing and Robert Surtees’s whiplash cinematography. It was Nichols’s second film, and it happened to look and feel like François Truffaut’s 13th. Over and over, you hear stories about how collaborative Nichols was, how he could probably get great acting from a can of soup, from men but especially from women — women who feel he brought out their best stuff. For Nichols, the tragedy of Carnal Knowledge is that the two protagonists (Nicholson and Art Garfunkel) are too chauvinistic to really know and connect with a woman.

This wasn’t simply a sexual thing. Some directors will say they love women and then give you nothing but actors in bikini tops and heels. Nichols gave you long legs, but also characters. He took a break from the movies after The Fortune and returned with a Gilda Radner live special from 1980 and the discovery of Whoopi Goldberg. He directed Goldberg’s one-woman Broadway show, a version of which was staged for home video and has been watched about 75 times by me. In focusing on women, Nichols also settled on a way to present them: glamorously. In the 1980s, the luscious lighting and lustrous hair and perfect clothes moved Nichols back to the women’s film of the 1940s. There’s almost no difference between Meryl Streep in Silkwood or 1990’s Postcards From the Edge and Greer Garson in almost anything. Some critics scoffed, and you get it. Maybe the movies are too bourgeois. Maybe the glamour does drown everything out.

But I don’t think that Nichols was a Places in the Heart kind of director. His best subject was emotional entanglement. He was drawn to works about men, women, and their respective and overlapping natures: what makes a man a man, a woman a woman, and a couple a couple. The generosity he’d shown in his work with May is what comes through in his latter three decades of directing. That interest ultimately diminished him in the eyes of some critics and maybe some of his Hollywood peers. After Virginia Woolf and The Graduate, he was never a fixture at the Oscars — Working Girl brought him his last slew of nominations (six). His movies were adult without being aggressively serious. They were unfussy, human-scale entertainments.

For some people, that was never enough. They argued his movies lacked weight, scope, heft, or depth. Nichols made relationship movies, perhaps even when he shouldn’t have. Charlie Wilson’s War, from 2007, was a government comedy. The core of the script (by Aaron Sorkin) involves Congressman Wilson (Tom Hanks) trying to help arm the mujahadeen, encouraged by a well-connected Texan (Julia Roberts). But that feels secondary to whatever is going on romantically, if awkwardly, between Hanks and Roberts. Nichols eventually fared even better in theater because, I think, the burden of auteurism fell to the playwright. He was allowed to focus on building that immediate connection among the material, the actors, and the audience. He won a pile of Tony Awards between 1964 and 2012. But I love the later phase of Nichols’s career. I was a child when it began. Some kids were captured by Star Wars and Sixteen Candles. I had Silkwood and Heartburn.

Goldman calls Nichols “titanically inconsequential.” And indeed, no critical list of the great or important movie directors would include Mike Nichols. Or at least not mine, and perhaps not even Nichols’s.

Still, he remains one of my favorites. He didn’t need conventional greatness. He specialized in entertainment, the sort whose transparent influence is all over the bright star-driven work of Steven Soderbergh. Do I find the politics of Working Girl and The Birdcage and Wolf reductive? Sure. I also enjoy watching Harrison Ford in Working Girl be looser and starrier than he’s ever been when playing someone not named Indiana Jones. Most stars were their best, strongest selves with Nichols. Like Altman, he loved actors. But where Altman preferred a zoolike atmosphere, Nichols was a classicist who’d come to understand — whether he was working on the stage or the movies — the primal appeal of charisma and natural, singeing talent. He catered to it, perhaps to a fault. But he also mined jewels from those qualities. He was one of the last directors to believe a star should resemble something fit for the sky.

Filed Under: In Memoriam, Mike Nichols, Obituary, the graduate, Elaine May, Who’s Afraid of Virginia Woolf

The Bill Cosby Issue: Processing the Fall of an Icon