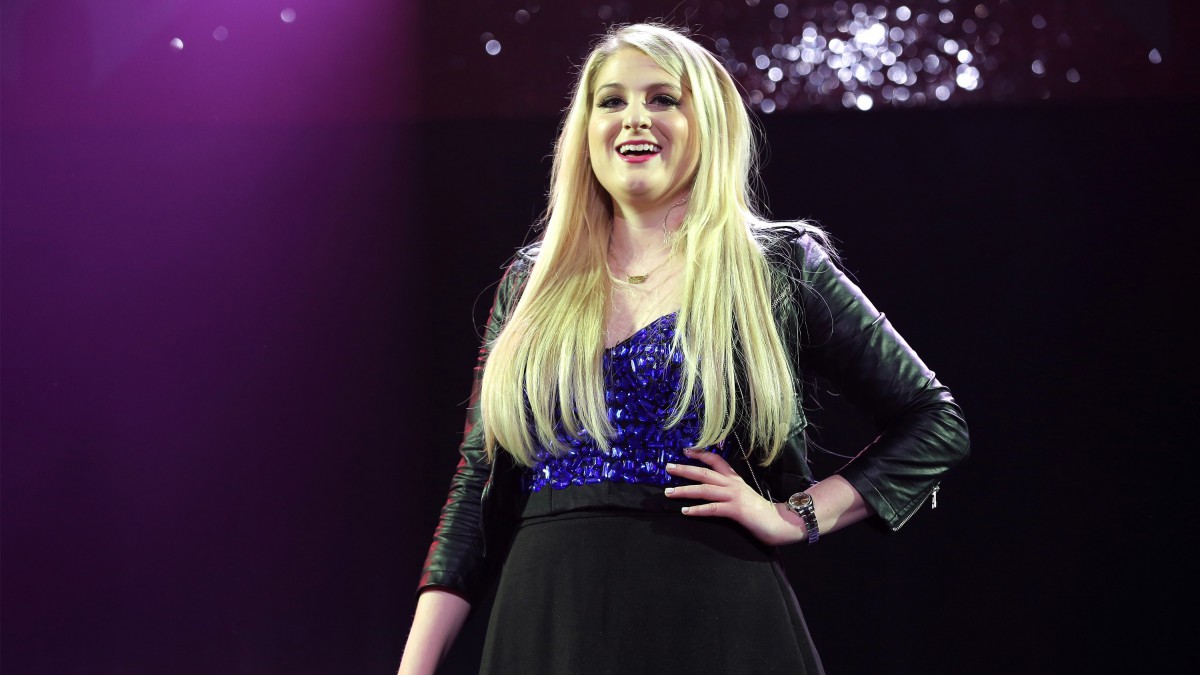 Some people expressed surprise last week when it was announced that Meghan Trainor’s debut album, Title, would oust Taylor Swift’s 1989 from the no. 1 spot on Billboard’s albums chart after nine weeks of Swiftian dominance. Trainor was this summer’s pop Cinderella story — her ultra-hooky “All About That Bass” became an inescapable radio hit and spawned a minor firestorm over whether Trainor’s empowering anthem for BBW-hood was mean to “skinny bitches” (no) and if it was dependent on external sexual validation from men rather than self-acceptance that comes from within. Trainor also received flak for bringing another kind of retro sound to the doo-wop vibe of “All About That Bass” — a black slang–inflected singing style in the tradition of white singers like Mick Jagger. Oh, and she raps.

Did I mention she raps? She raps — in the sense that Ed Sheeran raps. She’s not bad at all, but it still feels a little cringeworthy sometimes. She apparently can freestyle and likes to lay down some bars in the studio every night. While she’s not quite at Iggy Azalea levels of faux-Southern drawl, Trainor can raise an eyebrow occasionally with a lyric or word pronunciation. Her R&B jacking obviously comes out of love and from a place of respect, but the manner in which she does it sometimes feels like a flagrant foul. I’ll admit I raised my eyebrow at “Bang Dem Sticks,” in which Trainor adopts a Nicki Minaj–ish voice to rap some of the verses. But the song, like all of Trainor’s album, is winning despite its demerits. As Trainor raps gamely about how she fell in love with the drummer, you kind of fall in love with her. Trainor’s rap-singing bit is post-Macklemore pop, in which white people co-opt radio-friendly clean rapping. Trainor isn’t squeaky clean; the album is laden with sexual innuendo. “3AM” is about drunk texting and “Walkashame” is about, well, you know. Some of her best songs are slow burners that sound like low-rider oldies. Trainor duets on the ballad “Like I’m Gonna Lose You” with John Legend, which solidifies her soul singer cred; she and Legend sound easy and natural together.

While some of the criticisms laid on Trainor are legitimate, others are not. The mean girls of the ONTD message board started making fun of Trainor’s appearance the moment she appeared on the scene, mocking her Masshole affect (she is from Nantucket and Cape Cod) and repeatedly commenting that Trainor looks more like your coworker in a service job than a glamorous pop star. For others, that’s part of her popular appeal — she’s the pop star who looks like your retail store coworker! One day she was just folding shirts at the mall, singing to herself, and telling you to come to her open mic night at the local bar, and the next day she’s got a no. 1 album.

This is, of course, not really what happened. Trainor has been on a musical track since childhood. She went to Berklee College of Music and honed her skills as a songwriter for years before Title ever came to be. No pop star comes from nowhere. Trainor’s rise is premeditated and going according to plan. She won songwriting contests and signed a publishing deal with Nashville’s Big Yellow Dog Music at 17 after being recommended to the label by NRBQ’s Big Al Anderson. Her team now includes Troy Carter, who helped bring Lady Gaga to fame. But “All About That Bass” was written by Trainor, who writes all of her own songs. That she is a strong songwriter first allows Trainor to be a pop star second. The album is a cohesive product that introduces us to Meghan Trainor the musician, who feels like a unique and specific human being. Some of the songs are a little cloying, and Trainor’s take on gender roles is very straight, but you come out of the album feeling like she seems sweet and chill.

Trainor is cool because she’s so blatantly uncool. It’s her biggest selling point. She’s been compared to Tracy Turnblad from Hairspray — the cute fat girl who can outdance skinny bitches any day of the week, and not just because of her gloriously tacky styling. When Valerie Cherish sang along with “All About That Bass” at an Emmy party in the final episodes of The Comeback, the pairing of Trainor and the so-uncool-she’s-cool Cherish was a match made in heaven. That people seem to underestimate Trainor1 only helps her: They are surprised when she can sing live, when she’s a better dancer than some of the major pop girls who supposedly “dance” but just lazily step through routines. Trainor is bubbly, self-deprecating, and frequently very funny. She refers to herself as “M-Train” and her fans as “Megatrons.” The faulty criticisms lobbed at her — that she’s not pretty enough to be a pop star, that she is too regular to invite idolization — are what fuel her fandom. The last criticism — that she was bound to be a one-hit wonder with “All About That Bass” — has already been disproven with her second big hit, “Lips Are Movin.” Title is stocked with potential future hits like “Dear Future Husband” and the aforementioned drunk-text ode “3AM.” Trainor is like Kelly Clarkson, banking on her voice and charm to overpower the fact that she is not an otherworldly gorgeous human being like Rihanna or Katy Perry. And the more time you spend with Trainor’s album, the more beautiful she starts to appear. It’s not too surprising that Trainor’s Title would be the one to topple Swift’s 1989. Maybe she’s not the hottest girl in the room, but she might well be the most fun.

A Lovely Chat With the ‘God of F-​-​k’: Why Marilyn Manson Is Still Here (and Why We Haven’t Asked Him to Leave)