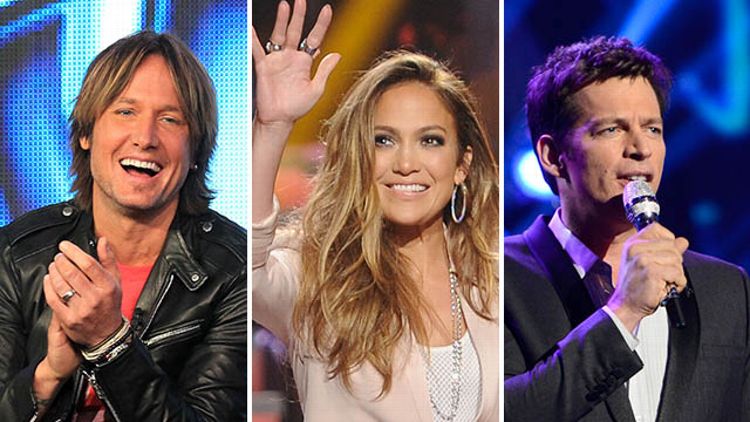 American Idol was in crisis. Coming off its worst-rated season ever, in which the once-world-beating Nielsen juggernaut was brought to its knees by snowballing audience apathy, the continuing fragmentation of prime-time TV, and novelty-slinging upstarts in spinning chairs offering a marginally fresher take on Idol’s long-stale formula, Fox was finally ready to make some changes. Major changes. Paradigm-shifting, paddles-to-the-stalled-heart-of-a-dying-behemoth changes. Changes that would redefine the very future of televised singing competitions, so that future generations could continue to gather around the holo-stage in their hover-condos and enjoy the off-key warblings of single iMoms just trying to feed their cyborg-toddlers! And so it … fired a couple of executives. Let half of its judges go. Kicked around the idea of decommissioning The Dawg, before ultimately letting him hang around backstage as a mentor, because apparently he just kept showing up for work, eyes welling with the still-fresh memories of his emotional death montage.

And then it brought back pretty hug machine Keith Urban, because country music’s teddy bear union is ruthless and insatiable.

And then it brought back Jennifer Lopez, because, uh, people seemed to like her two years ago, and maybe those movie and singing careers she was so grateful to have re-jump-started by her first stint on the show … um, yeah.

And then, today, with production on Season 13 (cursed numeral unintentional, or is it?) looming today, it has completed its radical, 33.3 percent renovation of the judging table with Harry Connick Jr., who had previously put in some fine mentoring work, we think — those last few episodes were a dangerous blur of cleaning-cabinet self-medication and power naps.

American Idol has always been about discovering the next singing superstar, and next season our judging panel will deliver a most impressive combination of talent, wisdom and personality to do just that. Jennifer Lopez, the triple-threat global superstar who loves Idol and whom Idol fans love; Harry Connick, Jr., a bona-fide musical genius and fantastic Idol mentor whose honesty and expertise can help turn these hopefuls into stars; Keith Urban, a multi-Grammy-winning artist who was such a positive force on the show last season. We are also very excited to have our friend Randy Jackson now in a new role as mentor, and the captain of our team — the heart and soul of Idol — Ryan Seacrest returning as host.

Meet the new panel. Pretty much exactly the same as the old panel.

Mariah and Nicki gave their lives for this. They deserved better.

We all deserved better.

Hold us tight, Keith Urban. It’s going to be a long season.