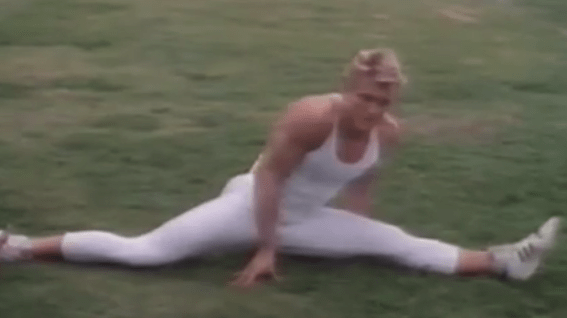 This week, while writing up Quentin Tarantino’s interview with Robert Rodriguez, we learned something, and entered a wonderful wormhole. Turns out, ages ago, long before he was the logorrheic whiz kid, Quentin had himself a job PA-ing … for Dolph Lundgren … on an exercise video … called Maximum Potential … whose cover is art (that is what art is). And with what perfect timing came this disclosure: Just this week, The Expendables 3 hits theaters, with its geriatrically overstuffed cast featuring our boy Dolph! And so we wondered: What other pec-popping stars of Sly’s woebegone latter-day franchise have flashed their sweat-drenched tank-top glories on the VHS-esque screen? Herewith, then — a YouTube investigation.

Lundgren did Maximum Potential in 1987, two years after he broke through with Rocky IV, but a year after Masters of the Universe began his inexorable slide into punchline land. Which, good thinking. Sure, he had become pop-culture immortal with a few choice lines just a few years earlier, but, as we all know all too well, the ’80s home-exercise tape industry was a fickle lady, and who knows how quickly that window would have shut. So, yeah. I think that potential was definitely goddamned maximized.

There is, of course, no shortage of options when it comes to seeing Arnold glisten and grimace. (For the true exercise footage aesthetes, Pumping Iron is simply the urtext.) But this randomly selected bit of teachings has, via well-intentioned misogyny, almost a strangely mesmerizing quality. “And you women don’t have to be afraid of this exercise — I guarantee you you won’t get arms like mine.” Gee, thanks, creepy uncle Arnold! But why are you standing so close and leering? Oh, also, is that synth-porn-funk background music the original soundtrack, or did some secret comedic genius layer it on later? Never mind, I don’t wanna know.

It’s hard to believe, but my extensive research (also known as light Googling on a bad Internet connection) indicates that Sly never had a branded home exercise Maximum Potential of his own. Maybe that’s because roughly 37.3 percent of all Stallone movies are already sports training montages? Bit superfluous, yeah. Anyway, here is Sly doing some apparently torturously hard leg-lifts in very teeny socks.

NOW we’re getting to the good stuff: super young Jet Li, punching the living hell out of trees and volleyballs and other inanimate sworn enemies. This is cool because Jet Li seems like the rare type of dude who, if it actually came down to it, might in fact wreck a barroom full of evil lugubrious biker-gang dudes. And now we know why: He’d been practicing punching trees like an unholy maniac the whole time.

You hire Wesley Snipes to plug your Total Gym Bally fitness machine at full price? You bet your ass you’re getting a whoap-ah! karate punch thrown in for free. Wait for it … wait for it … ahh, there it is.

MMA champion Randy Couture, it turns out, is a pretty serious guy: Video after video, we find him patiently explicating his considered workout routine, one built not for showy “beach muscles” but rather for maximum effectiveness in the sport to which he has dedicated his life. Sometimes, though, when in the gym, he also chokes out Criss Angel, and that’s definitely not bad to watch.

Couture’s fellow MMA’er Ronda Rousey, a newcomer to the Expendables family (house rule no. 1: don’t be a lame-o), is a budding crossover star, with an ESPN The Magazine cover and a New Yorker feature to her name. In this High Performance Mentality video (HIGH PERFORMANCE MENTALITY!!!), though, the show is totally stolen by her trainer dude, Leo Frincu, and his wonderfully unplaceable accent: “With Ronda … we created some sort of out-of-body experience … since we’re seeking perfection, we create a perfect Ronda.” Cool, cool, got it.

“The first exercise: the tank. This really works your shoulders, your biceps, and it works your imagination … ’cause you’re pretending you’re driving a tank.” Damn you, Terry Crews, being funny on purpose.