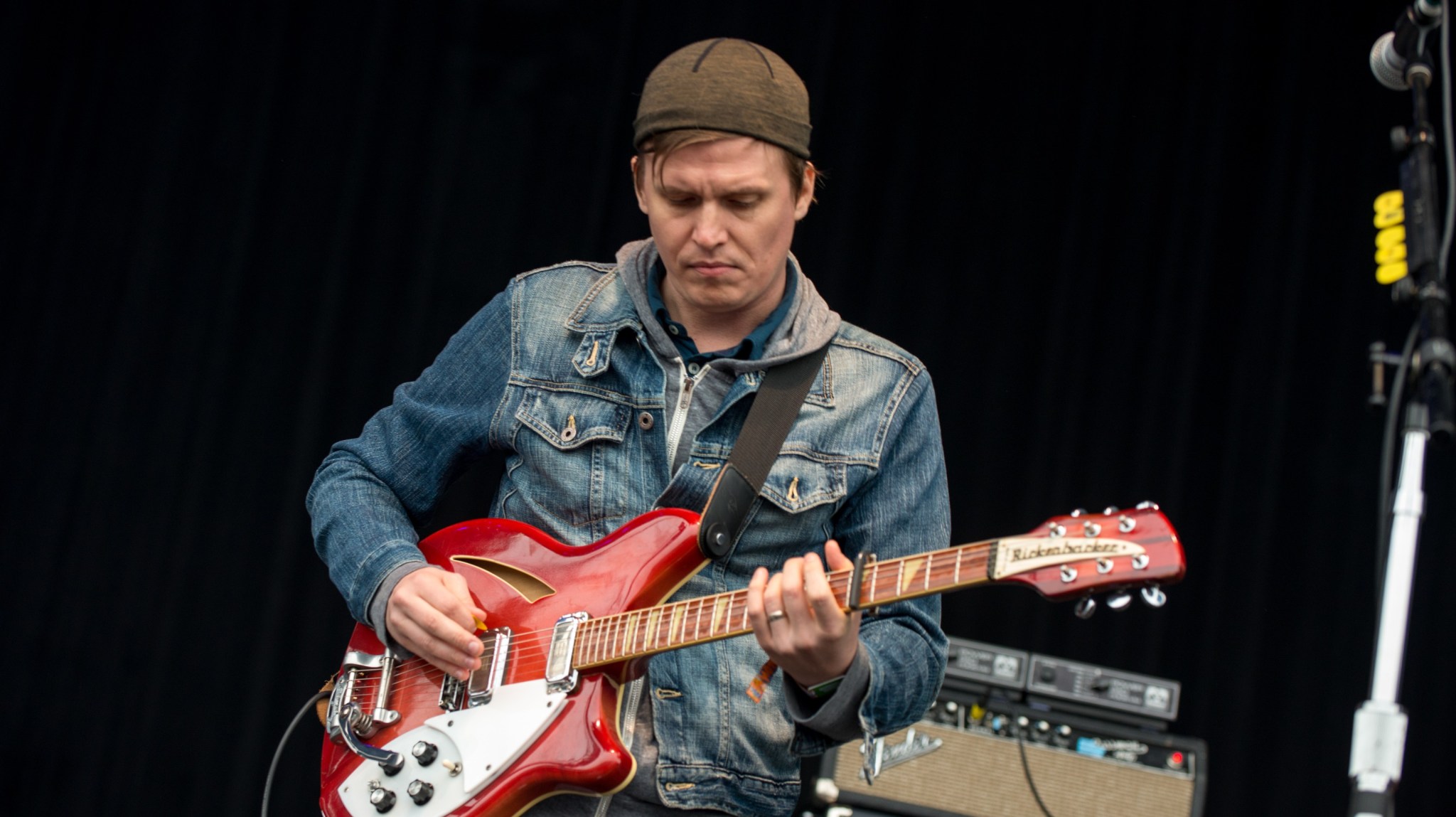 Yesterday, Death Cab for Cutie announced their first album in nearly four years and most people acted like they had broken up instead. This is because their return was bundled with the news that guitarist/producer Chris Walla was quitting after 17 years with the Washington band. And Walla represented a classic archetype within rock: the lesser-known foil who serves as the last line of defense against a punching bag of a frontman. Walla is Death Cab’s Slash, their Flea, their Edge, their Joe Walsh and, taken to a really unflattering extreme, their Wes Borland.

Among critics, tastemakers, and people who just like making fun of what self-identifying “sensitive” types listen to, everything they find risible about Death Cab for Cutie is projectable upon Ben Gibbard. Thanks to a legendary pull quote from Summer Roberts, you’d think Seth Cohen was in the band; but even The O.C. and Garden State didn’t have the consistent track record of Death Cab for Cutie when it comes to representing the indie beta-male. It’s a role that is not looked kindly upon by other indie beta-males, and Gibbard plays it extremely well — he uses big words and clever turns of phrase, and they often sit as awkwardly within his lyrics as they might in real life. He wears sweaters and glasses. He’s from the Pacific Northwest. He seems entirely uninterested in athletics, but he runs marathons and plays fantasy baseball. And while Death Cab is associated with wistful, heartbroken songs about lost love or love that never was or will be, there are ones that say incredibly callous things to women — the kicker from “Tiny Vessels” (“You are beautiful, but you don’t mean a thing to me”) plays a large role in making it one of their most well-received songs in concert, to say nothing of its sequel, “Someday You Will Be Loved,” and of course, We Have the Facts and We’re Voting Yes, which is a concept album about the indignity of seeing someone you love get married to someone who isn’t you.

Because it’s easy to imagine the typical narrator in Death Cab songs looking a hell of a lot like Ben Gibbard even if it isn’t Ben Gibbard, the singer isn’t granted the same kind of authorial distance given to most rappers or metal artists. As such, liking Death Cab can be seen as an endorsement of a certain kind of mind-set rather than an ability to relate to it; a Death Cab song almost invariably reminds you of a time when you made a lot of dumb romantic decisions because you didn’t really know any better and you see just how flawed your good intentions really are.

That’s difficult to understand, but Walla’s contributions are not — Death Cab albums sound great, and moreover, they sound completely different from each other. Their discography evolves and, if we’re going by my colleague Steven Hyden’s Five-Albums Test, I’d say the run from Something About Airplanes to Plans passes with flying colors. A lot of this has to do with Walla, whose production became increasingly complex and subtle as Gibbard’s lyrics became more general.

Their first two LPs, Something About Airplanes and We Have the Facts, were actually called “slowcore” with a straight face; it was more of an indoors take on spacious Pac NW indie, Built to Spill or Modest Mouse without the guitar heroism or punk-funk. The apartments are littered with dried flowers and coffee-stained notebooks, heartbreak, and missed job opportunities sung from a perspective of a romantic, drunken post-collegiate. Warm reverb shrouds these records,  and you feel nostalgia for a moment that hasn’t even ended yet. The attendant, ornate guitar lattices make me think of a version of Real Estate more in touch with their feelings, which is something that tends to make Real Estate fans really ticked off.

2001’s The Photo Album is exactly what it implies, less about foggy memories than captured moments — pre-Hipstamatic, they’re Polaroids of course, crisp and casual, yet still stylized. This is where Walla develops the sui generis Death Cab sound — electric guitars can sound like acoustics and vice versa; juddering, erratic drum machines compete with brisk, metronomic human beats; Gibbard’s vocals, boyish except for a couple moments when they’re subsumed by monstrous distortion. This is best captured on the deep cut “We Laugh Indoors,” a gorgeous, spacious track that, unlike 99.9 percent of indie rock songs influenced by Can, does something other than jog in place for five minutes under cover of mid-fi production.

After Gibbard struck it big with the Postal Service, Walla followed suit with Transatlanticism, his breakthrough album as well as Death Cab’s; it’s their most ambitious and diverse recording, an autumnal band proving they’re men of all seasons.

And by the time he actually got a budget, he exuded minimalist taste, lending a porcelain beauty and fragility to their major-label debut, Plans — Death Cab records had once been bummed, but this one was sad.

That’s when Death Cab’s imperial phase ends — Plans went platinum, earned them their first Grammy nomination, and established them as a legacy act, to the point that Chris Walla felt it necessary to speak out against Auto-Tune; to be fair, it was probably more of a scourge in emo than hip-hop at the time. Their subsequent albums Narrow Stairs and Codes and Keys are mixed bags, though you gain a new appreciation for them when considered in the context of major-label guitar music (I’ll decline the opportunity to say “rock” here for obvious reasons) — which in one way or another scans inherently macho. If you care about guitar bands having “big font on the festival flier” visibility and you also care about #feels, Death Cab might be all you really have left.

Which is why Death Cab’s next album is going to be more interesting than simply “the follow-up to Codes and Keys.” I guarantee it’ll be reviled on general principle, because the departure of Walla gives their most seasoned critics another free shot. And it could be a total disaster anyway. It’s presumable that Death Cab is going to finally make that guitar-free album they’ve always promised, and secondly, Walla’s production has been replaced by that of Rich Costey, which is the best possible name for a high-budget, hotshot-producer for hire. Walla’s track record as an outside producer is admirable and he will get plenty of work — his main beat is similarly tasteful indie, ranging from the Long Winters, post-“Popular” Nada Surf, the Decemberists. His outliers are still tangential to his erstwhile main gig — Tegan and Sara, an album by political Portland punkers the Thermals that has the word “fuck” in its title. He also produced the first Hot Hot Heat EP, which is an awesome fact that I somehow only recently learned of. Meanwhile, Costey has mixed and engineered Fiona Apple records as well as Brand New’s The Devil and God Are Raging Inside Me. But as a producer, he’s handled Muse, Glasvegas, and Interpol’s first major-label album.

But here’s the thing: As much as I initially thought of the Walla-Costey trade as highway robbery, it might be more of a step toward a necessary tank-and-rebuild. Codes and Keys is a record I didn’t care for too much, and after Narrow Stairs, it felt like Death Cab was stuck making a certain kind of record based on the format of Plans — a couple of “experimental” tracks, cutesy singles, and Gibbard doing Gibbard things to the point of near parody. In 2011, he was a millionaire mooning over Zooey Deschanel, and Codes and Keys sure sounded like it.

Except Gibbard and Deschanel got divorced about a year after Codes and Keys, which makes it an incredibly fascinating album in retrospect: In 2011, it was too saccharine, too referential. In many ways, Deschanel wasn’t just Gibbard’s wife, but emblematic of the hopes and dreams of the stereotypical, male Death Cab listener. Maybe Codes and Keys was meant to be some kind of Rick Ross–style wish fulfillment, but for most, “She’s young but she only likes old things / And modern music, it ain’t to her taste” was a little too real.

But now, Codes and Keys is an almost unbearably painful and cathartic listen — you recognize the times when you were really, truly in love to the point that it strips you of all self-awareness and you have no defenses (as demonstrated by the ode to domesticated trust “Doors Unlocked and Open”). And after everything goes to shit, you accidentally stumble upon those treacly emails, those pictures in matching outfits, the smug inside jokes, and know you meant every word of it at the time. And now it just seems so incredibly false — these are happy songs about being happy, and the “tragedy + time = comedy” equation has been reversed by reality. And that’s what makes them so crushingly sad.