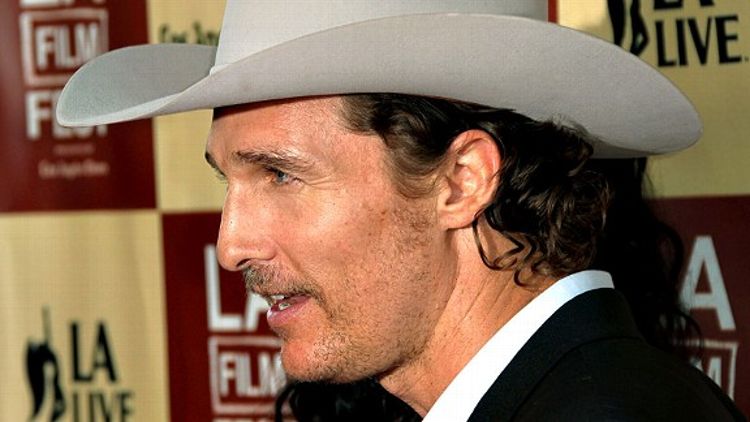 Matthew McConaughey will star alongside Gerard Butler and Sam Worthington in Thunder Run, an adaptation of David Zucchino‘s book Thunder Run — The Armored Strike to Capture Baghdad about the three-day assault at the beginning of the Iraq War. Here’s the thing, though: This will be a 3-D CG movie that will use facial-capture technology and green-screen technology to create a unique effect. “What we capture in our cameras will be them,” explains producer Brian Presley. “It’ll have a stylized effect to it but we are shooting them.” “That means when CG Matthew McConaughey takes his shirt off, the real Matthew McConaughey has also taken his shirt off,” Presley did not add. Grade: B+ [HR]

Charlie Sheen has a new job! His show Anger Management, an adaptation of the Adam Sandler-Jack Nicholson movie, has been picked up by FX, and will be aired alongside reruns of Two and a Half Men. The series will produce ten episodes for the summer of 2012; if those reach a certain viewership threshold, another ninety will be picked up. In other words: Epic Charlie Sheen Meltdown Part II, coming Summer 2012! Grade: C [HR]

Sony is offering the directing job on Sex Tape to Nicholas Stoller, and its lead roles to Jason Segel and Reese Witherspoon. The comedy, written by Kate Angelo, revolves around a married couple who spice things up one night with a titular tape; when they wake up, it’s gone, and they set off on a quest to find it. Seeing as Segel is like a foot taller than Witherspoon, we assume a footstool will, at some point, be utilized for comedic effect? Grade: A [Deadline]

Nicole Kidman’s production company Blossom Films has optioned Kevin Wilson’s novel The Family Fang as a potential starring vehicle for the actress. The book revolves around a pair of performance artists who used their children in their work; when the kids, who now blame their exploitation for their personal life crises, return home, the parents attempt one more big act. Kidman was reportedly inspired to make the film due to her own experience with a long-running performance-art act: For years now, Kidman has fooled the world into thinking she’s from Sydney, Australia when she is, in fact, from Wagga Wagga, Australia. Grade: B+ [Deadline]

Sylvester Stallone will star in The Tomb, an action flick that at various points had Arnold Schwarzenegger and Bruce Willis attached. The movie revolves around Ray Breslin, a prisons expert whose knowledge is put to the test when he’s framed and locked up in a jailhouse of his own design. Really, person who frames Ray Breslin? You’re going to give him the chance to escape out of a prison he designed? Just seems lazy. Grade: C [Variety]

Leverage’s Aldis Hodge has joined The East alongside Ellen Page and Alexander Skarsgard. He’ll be playing an ex-military member of an anarchist group. Hodge is rumored to have landed the role only after promising Page and Skarsgard some super-juicy stories from the set of Leverage. Grade: B [HR]

Beavis and Butt-Head Recap: Back on the Couch