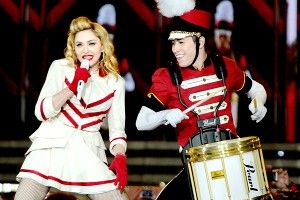 Every new Madonna album comes with a new Madonna persona, and the MDNA Madonna is seemingly into rave culture, partial nudity, and mind-blowing cultural tone-deafness. The first two may as well be put-ons, but the third is turning out to be pretty genuine: The New York Times reports that Ms. Ciccone is now defending her use of Nazi imagery during a performance in her current world tour after coming under fire by the conservative French National Front leader Marine Le Pen. Apparently it doesn’t go over so well when you slap a swastika on the forehead of a political leader and juxtapose it with Hitler’s head shot, in what sounds like the worst PowerPoint ever. (No protestations yet from Hu Jintao, Pope Benedict XVI, and Sarah Palin, who are similarly branded in the clip.)

The National Front first threatened to sue back in early June, when the clip first debuted in (no joke) Tel Aviv. In her statement, Le Pen even managed to awesomely throw some music-critic shade at Madonna, saying, “It’s understandable when aging singers who need publicity go to such extremes. Her songs don’t work anymore.”

Almost two months later, Madge has gathered her thoughts and defended her position thusly on Brazilian TV, saying that it’s OK to use Nazi imagery when you’re singing a song about “how much we judge people before knowing them.” So, theoretically, “Beautiful Stranger” could be getting a similar treatment down the road. “Music should be about ideas, right?” she continued. “Ideas inspire music.” Also genocide!

Madonna’s tour continues through November, and will finally bestow its tired provocations upon the U.S. at the end of August, if you’re into that kind of thing.

What Frank Ocean, Against Me!'s Laura Jane Grace, and Passion Pit's Michael Angelakos Have in Common

Rembert Explains the '80s: Bob Dylan Rehearses 'We Are the World'