Rembert Explains the ’80s: Bob Dylan Rehearses ‘We Are the World’ 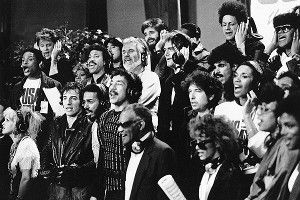 Welcome back to our series Rembert Explains the ’80s. Every so often, we’ll e-mail 25-year-old Rembert Browne a video from the 1980s that he hasn’t seen. Rembert will write down his thoughts as he’s watching it, then we’ll post those thoughts here. This week’s installment was selected by Grantland editor-in-chief Bill Simmons: Bob Dylan, rehearsing “We Are the World.” If you have an idea for a future episode of Rembert Explains the ’80s, e-mail us at hollywood@grantland.com.

Rembert’s Note: There was a point in my life where if you gave me a piece of paper and five minutes, I could list the order of the “We Are the World” singers. You know, like that thing you’re supposed to be able to do with the American Presidents. That was me with Lionel, Ray, Bruce, and the rest of the gang.

0:01 I can’t believe this exists. My requests for “We Are the World” have fallen on deaf ears for months now. I think I now understand why. This is about to be amazing.

0:03 Already so many mumbles from Bob. Three seconds in and this is already extremely voyeuristic and invasive. So pumped.

0:12 He’s hum-singing along, in an awesomely tone-deaf way. It’s like that friend everyone has (unless you’re that friend) that raps along to a song by softly mumbling and not knowing a single lyric. Yeah. That’s what this is like. Again, it’s amazing.

0:27 There’s a break in the rehearsal, because Quincy’s in the background attempting to work out some of the kinks in this verse. You know, Quincy Jones … Rashida’s dad.

0:30 Oh, hello there, voice of Lionel. I hope they let me see you and that glorious mustache at some point in this clip.

The way he says “Stevie” is unbelievably soothing. Listen to it immediately. Also, the musical elite of the ’80s calmly interacting with one another is quite a sight to see.

0:34 THERE YOU ARE, LIONEL RICHIE’S BLURRY MUSTACHE:

Who else is there?

1:13 Bob’s starting to get it. Way to go, Stevland Hardaway Judkins.

1:22 It’s almost sounding like the finalized version, Bob, which is amazing, seeing as that one minute ago you sounded like you were blowing bubbles underwater.

1:33 Bob, what happened? You leave Stevie’s side and suddenly you get all tone deaf on me again? Come on, man. You’ve got to get that confidence up.

1:36 Lionel is wearing shiny copper pants, and that is something I would like to show you right now:

1:47 Uh-oh, Bob. You just made a few sounds that sounded really bad. Wind it up, man. I hear they might give your solo to Dan Aykroyd if you keep this up.

2:00 The music cuts out, prompting Bob to go: “Ugh.” At least he knows that what’s coming out of his mouth isn’t good. It’d be super awkward if Quincy and the gang had to pretend like this was phenomenal. WHERE IS MICHAEL?

2:06 Yep, it’s about that time for Quincy to walk out to the mound and talk to his veteran pitcher, Bob Dylan.

Dylan: “What’s that?”
Quincy: “Just stand right at the mic like that, Bobby, it’s beautiful. And you know what’s nice, man, you singing along with the chorus like that. That’s the only time we do an octave like that. That’s beautiful.”
Dylan: “I get out right after ‘me’?”
Quincy: “Yeah, just after ‘you and me,’ but the thing you were doing when you were singing along with the chorus, ‘we are the children,’ that’s nice, man. Just a little closer to here. That’s beautiful.”

Also, it just became clear to me that this Dylan session was the same day the final video was recorded (unless Quincy wears the same shirt every day), which is cool.

2:34 I have to remind myself not to lose sight of the fact that Stevie Wonder, Bob Dylan, Quincy Jones, and Lionel Richie are in the same room making music together. Oh, and Diana Ross and Dionne Warwick are shooting dice and smoking Virginia Slims in the corner.

2:42 Stevie Wonder is the house pianist. That’s incredible. Nothing’s more incredible than that.

2:57 There was a cheer in the room. People are cheering Bob Dylan because he figured out his part. That’s all kinds of beautiful.

3:13 Uh-oh. Trouble in paradise. Bob now has to sing the chorus, which has turned into him making up notes and melodies and pretty much everything else. Quincy, put your shoes back on. We might need a second pep talk. Also, WHERE IS MICHAEL?

3:23 Even though the chorus was a disaster, he nailed his part again, proving it wasn’t a fluke.

This question was met by more cheers, of the Lionel and Quincy persuasion. Are they just going to act like the chorus thing didn’t happen? If so, that’s fine — I’d just like to know.

3:47 Lionel just ran across the screen. It was in the direction of Diana and Dionne. I think he just realized they were gambling with his money.

3:55 Bob and Stevie are giving it another try. While this is happening, Lionel runs back to his post. It’s unclear what his interaction with the ladies was, but I’m assuming Dionne threatened to cast a spell on him and he ran away.

4:05 Finally, a new camera angle on Bobby, which reveals all the glory of his curly Afro headphone indentation.

4:39 Bobby is starting to feel it, and now both he and Stevie are swaying back and forth. This is amazing. Is this in the Library of Congress yet?

4:45 Oh no, Bobby has a cold. He’s got the sniffles and just coughed. Poor guy. PUSH THROUGH, DYLAN.

5:07 Bob did it again, but it was flatter than usual. Like every note. And I think he knew it.

But when he finishes, everyone screams in approval.

I wish they would pan over to the peanut gallery. It’s starting to sound like they’re playing a drinking game with Boone’s Farm and you can only stop chugging when Bobby hits a note correctly.

5:29 So they play the track again. Quincy’s in his spot, Bob’s getting ready, and Stevie is sitting on his piano bench, grinning and bouncing up and down like a kid in a candy store. This is whimsy.

5:41 Bob Dylan’s verses are the vocal equivalent of snowflakes. No two even remotely sound the same. It’s actually weirdly impressive.

5:54 The end of that last attempt sounded eerily close to the final version. I’m so invested in him right now. I want him to get it. I really do.

6:04 Also, Bob is still staring at these lyrics like it’s the first time he’s seen them. It’s like when you miss a shot in tennis and then stare at your racquet, confused at why it keeps failing you so.

6:16 Oh, this is great. Bobby looked at Quincy for the cue to start, he came in on time, Quincy started a head bob and a fist pump, and Stevie’s still being Stevie. There are 8,500 GIFs to be made from this video.

6:37 After his verse, he launches into an improvised version of the chorus, singing in his highest register. It sounded great. The response from the gallery:

LIONEL AND QUINCY ARE PUMPED.

Also, I assumed there were more people there, from all the hooting and hollering, but apparently it was just those two the whole time. That’s great.

7:00 They’re listening to the recording of the last attempt, and by “they” I mean Lionel, Bobby, and Dorothy.

That smile on Diana’s face makes me think she hustled Dionne out of all of her cash and tarot cards.

7:10 Dylan’s giving it another shot, but more important, props to Quincy for rocking the gold chain. This guy can do very little wrong in my book.

7:21 Good lord, Bob. You don’t have to sing like an improvisational jazz saxophone player all the time. Just do what the notes say once. Or wait — maybe he can’t read music. Or maybe he can’t read? He’s like Nick Cannon in Drumline. Yes, the parallel between Nick Cannon and Bob Dylan has been made. Do with that what you will.

You’ve got to give it to the guy, he’s shockingly self-aware. Nothing but respect for the fact that he knows when he’s singing like a crazy.

8:01 Just throwing it out there: I’ll pay someone everything I have for the “We Are the World” handwritten sheet music.

Lionel: “That’s fantastic.”
Bobby: “I don’t think that’s any good at all.”

He looks like a fancy but poorly groomed pup at the Westminster Dog Show. THAT’S THE ONLY WAY I’VE EVER DESCRIBED MYSELF. I need to wrap this up so I can call home and get to the bottom of this.

9:04 Within all of those Dylan attempts, somehow, Quincy got what he needed. And once they were done, I got what I needed: