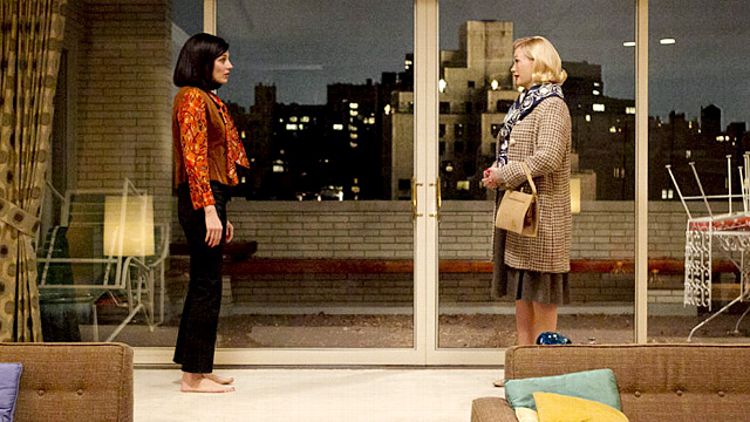 Having given us what we wanted all season, Mad Men decided to call our bluff and give us what we asked for. This episode was a throwback to earlier seasons in terms of pacing and plotlines, but it wasn’t the white-carpeted thrill ride down an elevator shaft to hell we’ve now been conditioned to expect. As Pete Campbell found out the hard way, Sterling Cooper Draper Pryce is not considered Madison Avenue’s cutting edge by the New York Times or anyone else important. And they’re not being kept off the record because they’re so out-there and revolutionary. No, SCDP has become a place where safe ideas land B- and C-list accounts. Rather than moving up the golden escalator from Menken’s to Macy’s, the agency has proceeded laterally toward Manischewitz.

Manischewitz is a fool’s errand. Goys are never going to drink kosher holiday wine. You’d have much better luck selling candy canes to Jews. The wine’s crossover potential is held back by its cloyingly sweet taste, owing to a ton of corn syrup. Manischewitz could initially only afford to grow certain hardy varieties of labrusca grapes that produced a bitter wine, so they made it incredibly sweet as a workaround. While it may have seemed this would broaden the appeal, it narrows it. The taste of Manischewitz is sickly and specific, the corn syrup trying much too hard to disguise the underlying bitterness.

Roger says he doesn’t like fishing for its “weighing and measuring” aspect, but we all know that dude keeps a platinum-and-diamond scale to rest his balls on in a drawer underneath his desk. Pretending you no longer like or care about competition is the gentleman’s way to age out of efficacy, but Don is not having that. As far as Don can tell, he’s as with-it as he ever was — and his underlings certainly aren’t going to disagree with him to his face. Save the forward-thinking, Pop Art–inclined Ginsberg, SCDP is in danger of becoming a reliquary for ancient awards. Don’s peerless rule over the early ’60s ad landscape puts him in danger of being associated with everything old and out of fashion. Nobody can be on top forever. It’s hard enough to be innovative once, let alone continually. Brian Eno produces Coldplay.

Megan tries to bond with Sally by teaching her how to cry for the camera, but it backfires when Sally catches wind from Betty that the adults are using Sally as a pawn in their game of phones. Betty can’t stand the idea of being weighed against Megan (literally, urgh). She dreads the day when Mark Zuckerberg inputs her photo into Facemash alongside Megan’s and everyone clicks on the slim young brunette. While we hoped Betty might cultivate a secret passion or talent (skeet shooting? stylist? sundae chef?), she still cannot locate any personal ambitions that don’t fall between the pages of Cosmo. (Lose weight, win his love, have your ultimate dream life now!) Once, Don would have been talking Betty into becoming a Manischewitz drunk for the sake of making a point to win an account. Now she secretly shotguns whipped cream and spits it up in the sink. Opening up at Weight Watchers is as close to a consciousness raising session as she gets. On the plus side, she and Henry Francis might have one of the show’s healthiest marriages.

Don is smoking again, and maybe some of Peggy’s bottom-drawer late-night dirt weed got mixed in with one of his roll-ups, because his ideas for Sno Ball are unmediated garbage lit on fire by the devil with a flaming trident. “The snowball is the sin that gets you into hell.” LOL DON C’MON. Has Don (a) lost his touch, (b) never really had the touch, it was just a beautiful illusion abetted by his awesome good looks and luck, or (c) been abducted by the Martians and replaced with a robotic clone whose strong magnetic vibrations cause snowballs to melt and elevators to drop into spontaneous free fall? How did Don get so old and out of touch all of a sudden? And how old and out of touch is he going to be by the ’70s?

Former hot shot Peggy’s pitch doesn’t make it out of the carport. She tries for something light and comic, but turns to questionably droll New Yorker cartoons while zeitgeist-channeling Ginsberg incorporates the messy vivid punch of the Sunday funnies. The measurement system for jokes is easy: whatever gets the biggest laugh. There is nothing subtle about a pig getting snowballed, but there is nothing funny or sexy about Don’s “devil sipping a Sno Ball” campaign. The assumption is that Don’s dumb pitch will cost them the account, but Pepsi ends up liking it. Sometimes stupid ideas get bought. (Just look at the upfronts!) Ginsberg works off his anger at Don by zinging him (“Tall man, short temper”), sugaring over his hostility with cracks rather than fists.

Megan is competitive in her own way, resenting her ginger friend for booking a role on Dark Shadows, and not understanding why said friend might get annoyed that Megan doesn’t have to wait tables between acting gigs. It’s like scenes from HBO’s Girls ’66. Jane is as exotically Jewish to Roger as Megan is hypnotically French-Canadian to Don. While Roger’s Fiddler on the Roof crack was ace, it filled me with a stern longing to see John Slattery play Tevye. Swiftly go the episodes of Season 5. Even Pete’s sex dream about Rory Gilmore seemed a little bit retro (a fur coat?). The only person genuinely looking forward to the future is Sally Draper, and that is because she is beyond ready to escape from her joint-custody nightmare. Betty’s experiments in good parenting always seem to end the same way: with a sudden cold front and a declaration to “go to your room,” or a reward of television.

Don’s ego does not recognize that Ginsberg’s campaign is blatantly superior to his. What is he supposed to do, admire him? That Pete is the only person who genuinely likes the devil ad should be a tip-off, and he still thinks the snowball is better. To every winner there must be a loser, and Don won’t lose even if it means rigging the vote. Stan laughs at Ginsberg’s allusion to Shelley’s “Ozymandias,” but Ginsberg seems to get that ad ideas are worthless pyramids crumbling into silt. He’s got a million of them. Peggy looked cute this episode! Even giving Michael her best smiling bitchface. Exactly what Stan predicted has come to pass. Ginsberg has buried all of them. Peggy tries to smother her competitive drive because of how unfeminine and unlikable she knows it can make her, but she can’t help but be delighted that Don hazes Ginsberg with trademark Draper brutal selfishness.

Without even pausing to close her book, Sally gets Megan to spill everything about Anna Draper and cuts her like they were BFF. (“You can’t sit with us!”) Sally will make a great lawyer. She has learned how to outmaneuver her mother, and she nearly beat her stepmom too. Don remains impossible for her to break, lending an uncomfortably provocative frisson to their scenes. As much as she wants to know what went on inside her parents’ marriage, she doesn’t actually want to know, because it involves thinking of her parents as sexualized human beings with lives predating and separate from hers. Don flatters Sally into apologizing to Megan by saying it’s the “adult” thing to do, but we all know she called a truce so she could eat those bagels.

Pete is so mad that nobody is comparing him to a philosopher in the New York Times, as if some journo dubbing him “Plato Campbell” would actually get Rory Gilmore so hot she’d come to Manhattan to sit on his desk. Pete Campbell is right to question Don’s apathy about the agency being left out of the Times spread (Sterling-Cooper-Nietzsche-Pryce), but Don is also not wrong to yell at Pete for blowing the interview. We all know how charming Pete Campbell can’t be. When will they learn? Always send Joan! Even on a phone interview, she could coax, engage, and positively mirror her way into any fluff or think piece.

Peggy is pissed, but no matter how hard she puts it into her work, her copywriting doesn’t get better. It’s possible that she’s too cerebral, not visual enough — and the cultural climate is changing to favor the accessibly childlike style of Ginsberg. She vents to Roger (of all people), who responds to her complaints that people have no loyalty with “every man for himself.” On the other hand, it was a great episode for Jane Siegel Sterling, frosted peach-lipsticked poster girl for ’60s Jewish-American Princesses. While she may have regretted christening the new apartment with Roger, she’s clearly going to hook up with the thoroughly assimilated (and accordingly entitled) Bernie Rosenberg and be shuffled off to a nice suburb soon. L’chaim!

Pete offers to screw Howard’s wife. Don tells Michael he never thinks about him. Roger uses Jane’s pink toothbrush without asking. The higher-ups at the agency continue to piss everywhere without thinking about how it affects other people. No one plans on retiring gently into fishing and golf. Megan preps a mod Draper family Thanksgiving with a cylinder of canned cranberry sauce. An overheated Don wants to open a window but there’s poison in the air; a historic smog day that ended with 400 New Yorkers dying from heart attacks and respiratory failure. All that sparkling man-made achievement has a chemical price. Who (if anyone) will bite it in the last four episodes of Season 5 of Mad Men? How do we get off the island? Who will wipe this blood off us?

Game of Thrones Season 2, Episode 7: 'A Man Without Honor'

The Survivor Finale: 'Perception Is Not Always Reality' (Except When It Is)