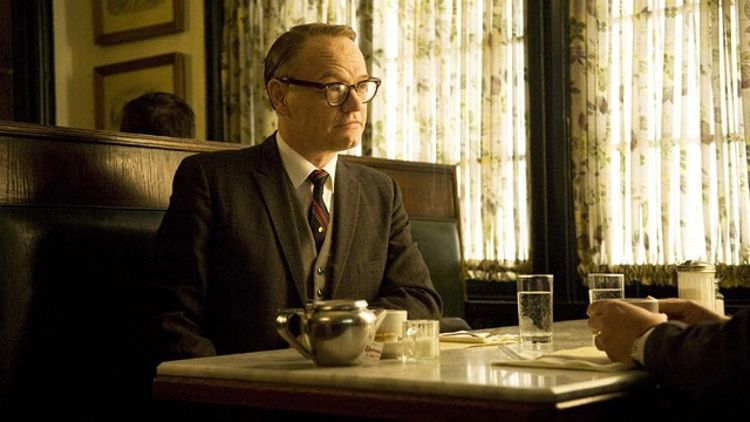 “The moment was so prolonged that it would have taken but little more to make me doubt if even I were in life.” — Henry James, The Turn of the Screw

Mad Men, like sports finals, can be unbearably tense. The dread is magnetic, pulling you in closer to the screen while you beg for something like a joke to break the spell and help you shake the feeling that something truly horrible is going to happen. Lane’s suicide was cut with a very dark laugh — the Jaguar his wife bought him not working as he tried to use it to poison himself. He moved on to the more efficient — if no less grisly — method of hanging. From the second Joan opened the door and encountered the smell, there was the question of whether we would get to see Lane’s dead body — the long tease as the characters peeked over the cubicle walls to view something the audience couldn’t, coaxing us into admitting that we want to gawk at the corpse, and then punishing us by granting us that wish.

Sometimes you see something so breathtakingly horrible it changes your life forever. I’m referring of course to Glen Bishop’s little teenage mustache. Marten Holden Weiner (son of Matthew), who plays creepy Glen, lived up to his middle namesake this week with a disillusioning trip to the Big Apple that made him realize the meaninglessness of having aspirations and how farcical it is even when you fulfill them. Escaping from Hotchkiss, where rich asshole jocks regularly piss in his locker, to spend the day with his prepubescent lady friend has been the fantasy propelling Glen through the school year. None of his boys believe that Sally is his girlfriend because she is 12 and definitely not his girlfriend. So then why does she bother talking to him on the phone sometimes? She’s obviously lonely. Maybe she likes the safeness of having her closest friend physically inaccessible. Or maybe she’s just like her father: a budding commitment-phobe.

When confronted with the real-life, virginal, go-go boot-wearing Sally Draper, Glen feels nothing like the unmitigated joy and desire he expected. Instead he’s awkward and disappointed. It’s not that Sally is different from how he remembered. It just always went more smoothly in his fantasies, where she probably behaved like the ideal he’d sculpted her into in his mind. In his mental plan there were no bathroom emergencies, no fraternal feelings, and Sally would like his mustache. What did he think would happen? She’d seduce him? Although she may play at being a woman, Sally is still very much a kid. Don Draper’s genes are strong and Megan’s influence makes Sally feel sophisticated, but when she gets her first period at the museum she runs not to chic older-sister type Megan but to comfortingly familiar mom Betty.

Sally has inherited a hybrid of both her parents’ bad temperaments. She does whatever she wants but then gets into trouble and requires help. She’s a combination of willfully independent and hopelessly reliant on others. It’s a reaction to the carelessness with which her parents alternately ignore and keep track of her, in combination with her relative physical smallness in the world. She throws snarling fits for attention and calls her long-distance fake boyfriend’s bluff, but in the end she’d still rather snuggle with her mom than dry-hump Glen Bishop just to have done it. (I’m sure Sally will dry-hump somebody soon enough, never you fret, but comfortingly it seems like it won’t be Glen Bishop. Maybe she’ll hook up with Ginsberg. How’s that for a twist?)

Remember how Don doodled a noose when he was bored in that meeting? It’s like Mad Men presented us with all kinds of options for death instruments (elevator shaft, high-rise window, coffin-like stereo system, lobster claw cracker) so that we could guess which one would end up killing which character, like a game of Clue. Joan’s body becoming a fiscal transaction stayed under wraps, but Lane’s embezzlement did come to light. Don thought he was doing Lane a favor by keeping it on the down-low, giving Lane an “elegant exit” and the opportunity to resign, but Lane is so private and English that he can act out expressively only in death. Rather than shoot up the firm, murder his rival Pete, or perhaps slap around a hapless ginger prostitute to get back at Joan for denying him a tropical frolic on her dunes, he punishes only himself.

Joan’s partnership, the Jaguar account, the mod smoked-glass office, all these would-be triumphs are now shot through with fresh streaks of blood. In leaving when she did, Peggy escaped from a haunted house. Sex disappoints salty old ghoul Roger because he’s buying it with unearned money and privilege, not earning it on his own charms. Don — Shakespearean king that he is — becomes bloodthirstier after the Jaguar acquisition, his appetite whetted for bigger name-brand national prey. He’s not happy they did one thing well, only angry they aren’t doing more new things better. Roger fluffs Don into stepping up to the challenge of getting Dow Chemical. Roger tries to play out the incorruptible Ken Cosgrove, but Ken wants no part of owning SCDP. In his mind he’s an artist, not an executive.

In the Natural History Museum dioramas section, Glen Bishop goes for the soft sell but still can’t make it happen with Sally. He may have thought her upset stomach was just a ploy to escape him, but every girl I was watching with knew what was up as soon as Sally ran off to the ladies’ room. I was about Sally’s age when I got my period while wearing white pants at summer camp. Why did Megan let Glen hang out at the apartment? Let the kid chill at Grand Central. He’s in New York. He should go bum around the city, not hang out in some older couple’s apartment. Unless they’re trying to incorporate him into their kinky sex life by having him watch or referee or something. Oh god, are they?

Don’s reinvigorated drive for his job doesn’t go over like you might think it would. He’s too intense and aggressive. He goes straight for the hard sell, acting so brash and overconfident that it comes across as shrill and desperate. He tries to show his knowledge of the products and passion for the gig by yelling. It makes a good contrast for how sickened and drained he seems after cutting down Lane’s bloating gray body. Don’s brother, Adam Whitman, hung himself after Don/Dick ignored his pleas for connection, and having lost Lane to a similarly static miscommunication, Don tries to connect with Glen Bishop by letting him drive. Why wouldn’t Don tell that weaselly little would-be Casanova to scram? Did the tragedy soften Don so much that he’s cool with Glen trying to make time with his daughter? Who could trust a kid with a mustache like that?

Now there is only guilt and aftermath. Joan feels awful that the last thing she said to Lane was a hostile reaction to his subtly gross sexual harassment. Pete can still remember the taste of the blood in his mouth from Lane’s knockout punch. Roger hates when anything disturbs the bubble of his selfishness. Don knows he was the most directly responsible of anyone for firing Lane the way he did, even though it was meant to protect him from what would have been a much more humiliating discharge. What will happen in the finale? Will we get to see Peggy? Will Jaguar ditch out? Will Jane Siegel dose the break room water cooler? At the very least, SCDP will need some new stationery.