Mad Men: Fat Betty, the Stones, and the Aging of Don 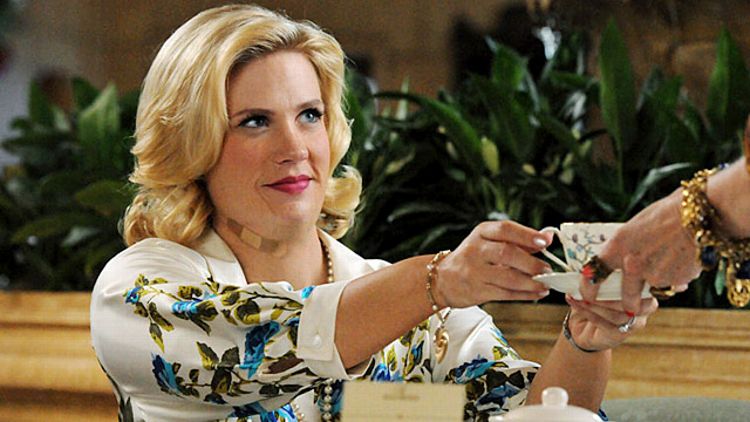 “It was kind of like the first time I had sex with Mick Jagger. I just couldn’t get over the fact that it was Mick Jagger. He’s an incredible lover, by the way. Amazing at oral — he loved it. What a mouth!” —Super-groupie Pamela Des Barres

The Heinz executives want Mick Jagger to lounge in a splash of mouthwatering sauce, even though if they wait a couple of years, they can get a new jingle from John Entwistle and Roger Daltrey in a kiddie-pool-size sauce-splash when The Who Sell Out. So to the concert we go. In the apartment Don and Megan share, the new Drapers seem to be playing house. Megan is a would-be actress, so she acts like Laura Petrie kicking back in white capris on the ottoman, playing the “cool young wife” role to the minidressed hilt. She could just as easily be backstage at the Stones show all kitted up like Marianne Faithful, exaggerating her French accent to make time with Keith. Megan knows Don and Harry won’t be able to get anywhere near the Stones, but she’s smart enough not to harsh Don’s mellow by telling him.

Don knows better than to try to pass as cool at the show. Harry Crane, who was never cool even when he was legitimately young, is in it for the girls. (The girls are not in it for Harry, unless a media credential helps get them close enough to Brian Jones to touch his harpsichord.) We know Don is old because he skips smoking the joint, because he has to wear a tie, because he is too tired to go to Fire Island (where his favorite poet Frank O’Hara will soon die). Harry, on the other hand, is a poseur above all else, desperate to fit in, trading on what perks he has in order to try to catch the last wave of girls and “fun” before he gets officially over the hill. He is sure to be calling his wife from the inside of a bad acid trip sometime very soon. Eating the whole bag of White Castle burgers was the most likable thing he’s done in forever, and it was gross.

Don treats the teenage girls that try to smoke him out backstage paternally. He flirts with them, but ends up flirting way harder with Michael Ginsberg. The girls’ youth is just a reminder for Don that he is far from teenaged, resigned to now out-of-date Rat Pack ways, with no hope of ever catching up with a younger, faster generation. Those girls don’t want men like Don anyway, with Brylcreemed hair and ties, old enough to be their fathers. They want pouty-lipped pretty boys in tight pants. Don, with a daughter who will soon be old enough to potentially sneak backstage and try to “Zou Bisou Bisou” rock stars herself, doesn’t seem to understand what the girls will get out of it. He claims he’s not jealous of their youthful yen for sexual exploration. Is he worried that they’ll be disillusioned? That the men they’ve made into gods might turn out to be boys, and not nice ones? That they might never fall in love having sex that way? Or that they’ll take too much acid and jump out a window thinking they can fly? You’d think Don — of all people — would understand the urge to fuck your way right to the edge, but he’s probably freaked out from realizing that the increasingly womanly Sally is likely to follow in his fucksteps.

Don and Roger also prove themselves old by assuming Mohawk would want a “regular” (read: male) copywriter, and not a semi-swingin’ chick like Peggy. Companies don’t want what SCDP once sold: power and tradition and nostalgia. They want Nehru jackets and long hair, mods and hippies. They want something new. Something zippy. Which is presumably why Peggy had to hire Rupert Pupkin, a.k.a. Michael Ginsberg; a sweaty plaid exclamation point with a good portfolio and impoverished manners. Stan tells Peggy she’s an idiot if she hires Ginsberg, unless she looks forward to scraping the name off her own door. And Stan is right to think that if Peggy hires a new Don, he’ll probably stomp all over her consistent hard work with showboating and pyro effects. I mean, hell, Dawn — the first black secretary ever at Sterling-Coop — had about one line and Michael Ginsberg got an involved backstory that resembled The Jazz Singer and Alvy Singer’s claustrophobically ethnic living quarters underneath the Coney Island roller coaster in Annie Hall. The plot of the episode was a microcosm of Stan’s own advice. We finally have a black character in a major role and they introduce/hire some Jew-bro and focus on him? Why would I possibly be more interested in annoying schmuck Michael Ginsberg’s internal life than in Dawn’s?

“When is everything going to get back to normal?” Never, Roger! The youngs have no respect for the past or its masters. And why would they? The brand-new stoves of just a few years back are scorch-marked and rusting, having failed to deliver the permanent domestic bliss they promised in the showroom. Oh! And speaking of candy-pink former models, Betty Francis provoked the usual cocktail of empathy, pity, and contempt. Noticeably heavier, she was found wearing a frosted Pepto-colored caftan, eating Bugles on the couch, and finding comfort in the consistency of sitcoms. Bathed in dusk or sitting in gloomy dimness, she confronted a life spent being coddled and used for her appearance, and the possibility that she might just suddenly vanish. The characters on Mad Men are not consistent, and that is what makes them more like human beings than most TV characters. They say things, then do other things. They break with both their stated morals and their real ones. They contradict their own advice. Maybe that woman Betty met at the hospital thought she was being helpful by telling the truth about what it feels like to know you’ve got cancer, but clearly her first instinct to be stubborn and not friendly out of shared misery and obligation was correct. All she got for her kindness was a soul-crushing glimpse of oblivion.

Ohhhhhh fat Betty! Bam-a-lam! (Sorry, I really missed Eastbound & Down this week.) What does Betty have to offer the world besides beauty? She doesn’t know, and so feels like the answer is nothing. Her dresses are out of date and no longer fit — which stands in particular contrast to Don zipping up his slim young bride’s mod sheath. She has a husband (new), kids (old), and a mansion (so creepy), but ultimately who the fuck is Betty Draper Francis? She calls Don because she hopes he might remember. She understands by now that he has no clue — having some ongoing personal identity issues of his own and not having been the most nurturing husband — but she begs him to comfort her because it reminds them of when it still worked. Now that their marriage is truly dead, Betty and Don both maintain a respect for each other that their new spouses obviously hate. They are old enough now to romanticize their younger selves, to see those selves like other people, strangers. It’s easy to feel wistful for something hard or painful you no longer have to do. When you are depressed and have sensual memories of a time you remember feeling particularly happy or powerful to fall back on, it can be easy to slip into them like a hot fudge sundae hot tub.

Even Mick Jagger, for all his hypnotic beauty and posh-accented charisma circa 1966, would eventually have to contend with disco and the collapse of the sixties dream into the sleek, coke-fueled business thuggery of the eighties. Mick, too, would eventually look embarrassing and out of place in a boxy suit, covering “Dancing in the Street” in 1985 with David Bowie. But SCDP can’t afford not to keep up — it’s their business. That’s why Peggy has to hire Ginsberg and why heavyweight Byronic hero Don Draper has to know why the girls like Mick and Brian Jones. It’s also why Microsoft thinks those dubstep Internet Explorer ads are a great idea. Companies don’t understand why they can’t be cool, when the reason they can’t be cool is because they’re companies. Conformity sold in the ’50s, so SCDP sold conformity. Something that posed as individuality started selling in the mid-’60s, so now they want to sell that instead. Put another way: SCDP hired Ginsberg because his book is all gags — and if there’s anything the guys at SCDP love, it’s a good gag. Don and Roger and Harry want to make sure they are laughing with the young guys and not being laughed at.

When you hire disrespectful pricks because they remind you of yourself, how surprised can you be when they disrespect you and act like pricks? (The same goes triple for dating them, as Peggy really ought to have learned by now.) Both Roger and Peggy operate under the faulty belief that the hierarchy can be controlled. Roger, because of his ignorance, nepotism, and privilege, believes he will always be around, and Peggy, because of her (feminist) belief in meritocracy, thinks the best will surely rise to the top. But being king of the mountain just means you’re now in a position for someone to knock you off. What is cool is then doomed to become uncool and dated, spurring counter-movements before eventually reemerging as the buffed-smooth surfaces of nostalgia: edited to omit the anxiety of failure, forgetting solo albums and bad haircuts and comeback tours. Nobody can take 1966 away from Mick, but he can also never go back. I wonder how “Moves Like Jagger” makes him feel, because, like Don, I can’t help but turn rock and roll into psychiatry. Freud and Jung were the old intellectual currency, and Don has nothing relevant or paisley to say to a teenage girl about the Stones. But he is nothing if not adaptable, and if he has to play the square just to try to get in a room with the new vanguard, he will. As for Jagger, he gave his own take on the necessity of self-advertising in a ’66 interview; “They have to know that you exist.”