A Bieb Swags in Brooklyn: Justin Bieber Live at the Barclays Center 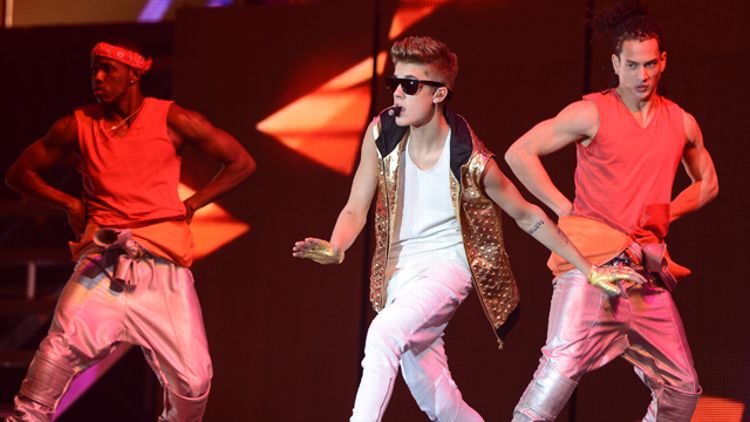 “Do you have,” the mother of two girls sitting next to me asks, while gesturing her hand vaguely forward, “kids there?”

“Huh?,” I ask, a beer in one hand, a white-Cheddar bratwurst in the other.

“What …” She pauses, then asks what she meant to ask in the first place — “What are you doing here?”

A bit hostile, maybe, but a fair question: I’m at the Barclays Center for last night’s Justin Bieber concert, alone — well, temporarily, while my buddy finishes shooting photos; I don’t quite have the stones to see Justin Bieber totally solo — and I have been avoiding eye contact so as to not accidentally creep anyone out, and so I get why this lady is now vetting me as a possible threat to her offspring. When I explain that I’m a “professional” doing a “job” she eases up, and by the time my buddy shows up she’s downright chatty. She doesn’t even really like Justin Bieber, she says, but her kids are obsessed. Don’t get her wrong, she loves pop music, she just prefers One Direction. They’re more melodic. Do I like Justin Bieber?

Do I? I’ve certainly spent a lot of time thinking about him and listening to his music, both on the clock and off. I admire the way he and his team have managed his career. I find the question Why did this particular harmlessly attractive teenager with passable dancing and singing skills become a monolith? interesting. So I equivocate, change the subject back to her. But “What are you doing here?” I know the answer to that one. I’d argue that some music writers take teen-pop seriously, at least in some small part, because the surrounding obsession reminds them of themselves, younger. They’ll forever love music, but never again like they did when they were 13. And here comes teen pop offering a view of pure, unmuddled devotion, up close and personal. In other words: I’m here to see some spectacle.

It starts outside the arena, with a spontaneous chant — “Justin BIEBER” “Justin BIEBER” — that holds for maybe half a minute before devolving into breathless shrieking. Inside the arena, before the ticket takers, a clump of homemade Bieber posters has amassed. I guess maybe you’re not allowed to take the posters to your seats, and so this is where everyone’s been dumping them? But it looks like “a shrine. A shrine to Justin Bieber. A shrine!” as the tween snapping photos next to me, and commentating to herself, puts it. These things are really tricked out; there are heart signs and Christmas tree lights and feathers and glitter everywhere. Two little girls in matching black-and-purple tutus, fighting off rapid-fire crying fits, plop down the latest addition: “I Have Triple Beiber [sic] Fever.” They spelled his last name wrong, and a third girl is nowhere to be seen. But I bet Justin wouldn’t be bothered much.

A little further inside there’s the merch booth, which comes adorned with a life-size Bieber poster reading “Swaggy Approved Official Merchandise.” You can buy a modified no. 12 Lakers jersey that has “Swaggy” across the front, as well as a T-shirt reading “SWAG ON YOU.”

Some cacophony erupts. Cody Simpson, a 15-year-old Australian would-be Bieber, has taken the stage. He’s in a tank top, baggy pants with a metallic sheen, and a headset microphone. The jumbo screen behind him shows Cody on a beach in a tux, his bow tie undone, an acoustic guitar slung behind his back. In the corner: “#WISHUWEREHERE.” I’ve been tangentially aware of Simpson for a bit, and I’d long figured that the Bieber team would choose to discredit or dissuade such a direct attempt at a clone. (Back in the ’90s, didn’t you have to choose between Backstreet or ‘N Sync?) Instead, Bieber Inc. has decided to co-opt the competition. It’s like the tween version of what Jay did to Kanye with Watch the Throne: mollify a threat to your dominance by bringing it into the fold. Very shrewd.

Cody leaves the stage, and I wish him all the insane ubiquity he desires, but now it’s almost Bieber time. The screen blinks off and on, and we see an odd old key engraved with a “B.” We’re either hearing Michael Jackson (the only guy Bieber’s chasing, according to his Svengali Scooter Braun) or seeing ads for Bieber-endorsed products. The crowd is made up almost entirely children with chaperones, but looking around I do spot a cute punky lesbian couple in their twenties: One girl’s in black lipstick and looks like an angry gallery receptionist; the other — in a silver varsity jacket and high-tops, her hair in a modified pompadour — looks like Bieber.

And then a sonic boom erupts, and a heartbeat starts pounding, and the screen flashes a countdown: 10 minutes. Cue mania. Every minute that goes by another collective shriek is unleashed. A few minutes in, one of the little girls in my row dictates a text to the mom: “Say six minutes 28 seconds and” [PAUSE] “who knows how many milliseconds.” And then the clock hits zero, the fireworks pop off throughout the whole arena, and — holy crap — Justin Bieber is being airlifted onto a spot on the stage marked by what looks like a laser halo, in preposterously enormous silver angel wings.

“Brooklyn, are you ready to believe?,” he asks, as he unleashes the wings. “I go by the name of Justin Bieber. Let’s party.” And from there, this thing doesn’t stop much. The thematic changes come fast and furious: One minute his dancers are waving world flags, the next they’re in space suits. Then they’re angels, I think? All white and waving white drapery around and maybe doing some standstill form of rhythmic gymnastics? But oh, no, wait, now we see a video interlude and they’re underwater angels, and Bieber pretends to dive in, too, and now he’s in the video and he’s swimming with the sea angels. And then he gets shot back onto the stage from a spring-powered riser, and after a few songs he takes off his sunglasses, and everyone knows to scream for that.

As you may have heard, Bieber has recently undergone some lady troubles. But there’s no sign of distress. What there is is so much, constantly: more fireworks, and growing-up montages, and videos in which Bieber fights off paparazzi ninjas. He does air guitar moves while his actual guitarist shreds on a gnarly maple leaf ax; he plays a white grand piano. He flies above the crowd in a crane strumming an acoustic guitar with gold fingerless gloves on. But what might be most surprising is that, at one point, Bieber actually asks the crowd to make noise.

It’s not that they haven’t been loud. It’s that they haven’t been earsplittingly, terrifyingly loud. In his early days, Bieber was inciting riots in suburban malls. Since, his overall popularity has certainly swelled. The fervor with which it’s expressed, though, sensing from Barclays, may have lessened. It makes sense: For how long can you shriek?

The transition is ongoing — he’s trying to expand both to an older female clientele and to dudes — and the growing pains are inevitable. When he slyly lifts up his shirt to show off his abs, the mom says, “I can’t believe he did that!” “Did what?,” one daughter asks. “Nothing,” she says, while hugging the kid’s head.

But even as it’s being aged, the brand hasn’t been muddled: When Bieber talks, it’s to uplift. He thanks everyone for supporting him: “You retweeted me,” etc. He talks about this “crazy adventure we’ve all been on together,” and sticks insistently on-message: If you “believe,” you can do anything, including, but not limited to, being a doctor, a dancer, a musician, or a police officer. He says he couldn’t imagine he’d be up in front of thousands dancing and singing, but he worked at it, and now here he is. And at one point the message even segues into an appraisal of his trousers. “Look at these cool leather pants,” Bieber says, tugging at the loose-crotched, chain-adorned pair he’s wearing. “I never thought I’d be able to pull off cool leather pants!”