Lightning Round: The First ‘Avengers: Age of Ultron’ Trailer Is Here, Earlier Than Expected 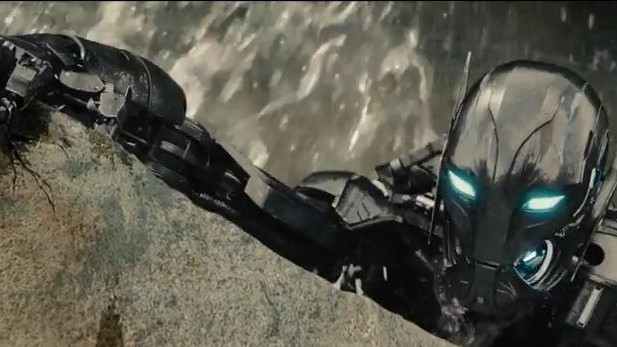 Cool story: The Avengers: Age of Ultron trailer was supposed to debut on next week’s episode of Agents of S.H.I.E.L.D., but it leaked Wednesday night. Then Marvel tried to pull down all the renegade videos. Then Marvel threw up its hands, tweeted something cute about Hydra, and released the official version anyway, lest all of us be forced to watch a trailer of suspect provenance and quality. Anyway: Age of Ultron, lightning round, go!

Jason Concepcion: I’m disappointed that the dinner-party scene, described by the chosen nerds who saw the trailer at Comic Cons San Diego and New York, was not included in this version. The scene apparently was all the Avengers hanging out, swilling Tony Stark’s rare scotch, and trying to lift Thor’s hammer. Everyone fails, one after the other. But then Captain America manages to budge it, just a little, leading to a Thor Jack Benny reaction. It sounded like a funny bit, the kind of thing I loved about the first movie. I found this trailer to be a tad overserious. Anyway … HULKBUSTER ARMORRRRRRRRRRR!!!!

Mark Lisanti: As a loyal and responsible employee of the Walt Disney Marvel Universe,1 I refused to watch the leaked version of this trailer proferred by dozens of instantaneous links in my Twitter feed, confident that the Company would shortly abandon its plans to officially debut the clip next week in the interest of Giving the Internet What It Wants Right Now, always a noble and reasonable course of action. (And I MOST CERTAINLY did NOT start formulating workaround story ideas like “Re-creating Every Shot of the Leaked Age of Ultron Trailer From Memory” on the off chance that Marvel would eradicate all bootleg versions without also providing the real deal.) But the powers that be put it out early, everyone wins (except ABC and the producers of Agents of S.H.I.E.L.D.), and here we are, with a new trailer to pick apart.

As someone who’s not intimately familiar with the Ultron story — you could convince me he was created when Red Reddington’s life force was absorbed by Hydra during a Hot Infinity Stones massage and transplanted into a decommissioned Iron Man suit — all I really have to go on, besides the unending torrent of wiki-words waiting to gush into my eyeballs should I deign to summon them forth, is this two minutes of footage. I couldn’t be more on board with James Spader’s voice-over work, which is the star of this show, even more so than a grimacing Tony Stark, Bruce Banner quivering in an anti-Hulkout Thundershirt like an anxious Chihuahua, or the jet that poops out Black Widow. No shots at Loki or the millions of armored, speeder-bike-riding cockroaches that poured through the interdimensional sink drain above Manhattan in the first Avengers, but maybe we finally have a villain I can get behind, even if I suspect we’re going to wind up on that floating chunk of space-pumice with Thanos sooner rather than later. Thanos, man. I don’t know if I’m ever going to care about that magic glove, no matter how many movies you put him in with a Diesel sapling dancing to Tarantino’s iPod.

One other stupid gripe, while we’re on the topic: Yeah, the Hulkbuster outfit looks cool, but I’m cringing a little at the thought of yet another city-decimating punch-up between a superhero and another, slightly larger and more powerful superhero. We’ve seen that enough by now. And no more “I gotta go put this thing in the other thing to stop the bad thing from happening.” We’re done with that, too. The Spaderbot’s got no time for it; they’ve already cut his strings to free him from your thirdhand MacGuffins.

Sean Fennessey: This might just be the toll you pay on the too-early teaser turnstile, but the Empire Strikes Back–ening of this particular installment of the Avengers trilogy seems unwise; perhaps Joss Whedon is flexing some instinctual storytelling muscle that needn’t be tensed. The greatness of The Avengers, or what approximated the feeling of greatness, was in the little dalliances: shawarma, fighting in the war room, dick-measuring, Loki-smashing, etc. But this sure seems like a “no jokes allowed” DC property at first blush. So dark! Such stakes! And while I agree that Robert California’s got all the right basso profundo for Ultron, they’re not exactly exploiting Spader’s smarm-comedy chops here. Puppet masters? Strings? Talking robots off the leash? Whatever, man. Just make the next Infinity Gem a ruby-embossed whoopie cushion.

Alex Pappademas: I mean, it’s Joss Whedon, so it’ll probably be funnier than this makes it look. I don’t know. Whichever braid of neurons in my brain is supposed to light up at the sight of somebody with CGI eyes yelling in slow motion is a burnt match at this point. You ever walk down the street in New York in the morning and see discarded air conditioners on the sidewalk? And because someone has crowbarred the metal shell to get at the Freon or the copper or whatever precious thing is inside an air conditioner, the air conditioners invariably look like they’ve been not so much thrown out as ripped to pieces with great violence, like someone needed the copper but also wanted this air conditioner dead real bad? That’s how I feel about superhero movies. My heart is an air conditioner, and the part of me that used to want to see cool live-action movies based on comic books is a little copper spring that happens to be worth a buck or two on the scrap-metal market, and every single superhero movie released in the last five years is a crowbar. I feel like I’ve been made to smoke a carton of superhero movies to cure me of the habit forever, except there’s a truck backing up with a hundred more cartons on it and I’m going to be cured of ever thinking this was a fun kind of movie not by mere aversion but by my death from superhero-movie cancer.

This trailer is about dread. I felt dread when I watched it, just like I felt dread when I first saw this. Because it’s October. And we — we as an Internet, we as a culture — are going to talk about this movie nonstop until May 1. We’re going to throw massive intellectual resources at the question of what’s going to happen in it, and then once it opens, we’ll reallocate those resources to talking about what’s going to happen in Avengers 3 and the 482 other Marvel movies set to spin out of it, as if we as an Internet and a culture on some level believe it’s on us to will these movies into existence by talking about how awesome they’re going to be. Which we don’t! They’re going to keep coming out no matter what. Ultrons gonna Ultron. Forever. But we have a choice, right now. We can put seven months of mental and emotional energy into convincing ourselves that Age of Ultron is the superhero movie we’ve been waiting for, that it’s going to be different this time. Or we can put that same energy into brainstorming ideas for a new, crowdfunded civilian space program, and one day our children will play on Venus.

Mark Lisanti: Someone needs a hug from Spaderbot! [Spaderbot pulls him in for a hug, twists off his head, and drops it nonchalantly to the floor. Joss Whedon continues eating his shawarma.]

Chris Ryan: Just want to chime in and say you know it’s a teaser if they’re hiding Joss Whedon’s banter. All the “little boy singing the national anthem in Pittsburghothamnewyorkcity” from The Dark Knight Rises is here, along with a barely audible villain threatening a metropolis (or … THE WORLD) with death by awkward symbolism (string). Not having any dialogue in a Joss Whedon trailer is like not having the Enterprise in a Star Trek trailer. You know it’s there, you know it’s coming — you just have to wait a few more weeks, or months, to hear it. In a sense, getting all the Bay for Beginners crane and CGI shots, and the Christopher Nolan “hero looks up, concerned” reactions out of the way in the teaser is promising. It means the thing they are witholding, the thing they actually want to sell, is the words.

Also, Jeremy Renner is in a forest again! In the snow! Can’t wait to see more wolf tricks!