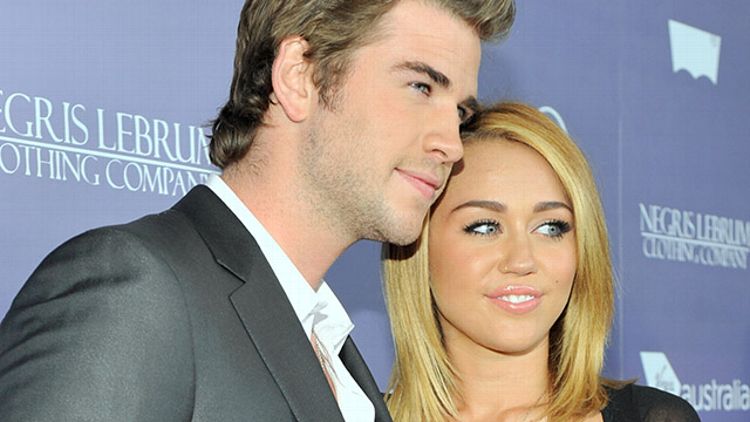 Liam Hemsworth & January Jones: Miley Cyrus’s fiancé was spotted leaving a pre-Oscars party at the Chateau Marmont with January Jones. Betty Draper Francis! “Liam got January’s coat and helped her put it on, then they headed outside. They made sure to leave a few seconds apart, so they wouldn’t attract too much attention. Then they jumped into a waiting car and took off.” But, of course, paparazzi caught them. Miley went to Elton John’s party the next night and was “all over the place.” She was spotted at fashion week in New York “flirting with every guy and girl in sight. Especially the models!” The couple haven’t been spotted together in a week. “January, meanwhile, has a reputation for romancing unavailable men.” OOH, THEY WENT THERE. “In addition to high-profile exes Ashton Kutcher, Josh Groban and Jason Sudeikis, she has reportedly been linked to married celebrity chef Bobby Flay and supermodel Claudia Sciffer’s [sic] husband, producer Matthew Vaughn.” But apparently it’s not January’s fault, because “Miley is not the girl Liam fell in love with. She’s turned into an embarrassment.” Because she cut her hair short? Pfffffttttt.

Michelle Williams & Jason Segel: The couple broke up. It was Michelle’s idea. Williams “apparently broke up with Jason via text message. She felt terrible. She didn’t want to deal with him face-to-face.” Jason Segel is Nick Andopolis, isn’t he?

How Did Kristen Stewart Injure Her Foot? “I’m an idiot.”

Is Jessica Chastain’s Hot Italian Boyfriend Using Her? “The Zero Dark Thirty actress, 35, has quietly been dating Italian heartthrob Gian Luca de Preposulo for a while now, and according to a source, he’s a complete playboy.” Are you sure you’re not just stereotyping Italians? “He’s dated hot models and is well known for bouncing between women.” Like, literally bouncing between them? Hot. “The Italian count” is also “no stranger to the Hollywood life and counts Leo DiCaprio and George Clooney as friends.” Oh. “If she’s smart she’ll leave him before he breaks her heart!”

Tori Spelling to Divorce Dean McDermott? They were spotted “getting into a full-blown screaming match at Urban Outfitters” in a Thousand Oaks mall. That’s sooooo Donna Martin (although Donna wouldn’t be caught dead in Thousand Oaks). “The couple’s successful brand relies on them being blissfully in love with each other.” Isn’t every couple sort of a brand in that way? “Tori believes Dean is seeing two different women.” She justifies his cheating with the logic that he is “a full-fledged sex addict” She “regularly checks his Internet history and has found loads of porn on it.” I mean, yeah. It’s the Internet.

Prince Harry & Cressida Bonas: Cressida Bonas is such a rich-girl name. On a romantic Swiss Alps getaway, “Cressida was on Harry’s lap. They were full on making out. Cressida looked happier than ever and the scenery was so romantic.”

Pam Anderson’s Meltdown: “Getting older is hard on any sex symbol, but in addition to her fading looks, Pamela Anderson is also facing a $370,000 tax bill!” A friend says that “Pam is a mess. She’s flat broke and it’s put her into major panic mode.” To rustle up some cash, she’s selling her $8 million Malibu mansion. “She loves her house and it makes her sick knowing that she has to sell it.” She modeled for sketchy website “FrogAds.com” later “accused of duping investors out of more than $30 million.” Anderson is “definitely going through a mid-life crisis. She can barely sleep and cries all the time. She feels like her showbiz career is over and that she has no fans left. It breaks her heart.” And mine! Can’t she get a cut of Kim Kardashian’s money for popularizing celebrity sex tapes?

Misc/Etc: “Renee Zellweger, who seemed very unsteady on her feet while reuniting with her castmates of Chicago.” “You know what they say about guys with fake blonde feet.” “There he partied with Steven Tyler after intensely flirting with a blonde model.” “she networked like crazy in her red Valentino gown.” “At this point, that poor little girl is more used to seeing her mother drunk than sober.” “The news came as a crushing blow to Kelly Rowland” “the least sexy actress alive” “working hard at Burger King” “Gwen Stefani really is the coolest celebrity mom!” “Shopping for a babymoon?” “Life is good for bearded buddies.” “no woman wants to pose next to Heidi Klum” “Britney’s dark side” “Being single ain’t easy.”

Josh Brolin & Diane Lane: Introduced by Barbra Streisand, the couple have split after eight years. “The stars simply grew apart.” Rumors of Brolin’s not-very-private alcoholism might have had something to do with it, too. “He could sometimes be found partying with a Hollywood crew that includes Sean Penn and Jeremy Renner.” Brolin joshed on Letterman after his New Year’s Eve arrest for public intoxication that “It’s gotten to the point where I wake up and there’s two cops next to my bed.” Uh. Best of luck to you, Cherry Valance.

Clive Davis & Kelly Clarkson: Clarkson took issue with the way Clive Davis presents their business relationship in his memoir The Soundtrack of My Life. He claimed My December bombed (even though it went platinum) and says that Clarkson cried when he forced her to include “Since U Been Gone” on her album. She admits she cried, but says it was because he called her “a shitty writer.” 80-year-old Davis, who also comes out as bisexual in the memoir, subtweeted Kelly, “I had every fact checked with five people.”

Alec Baldwin & Shia LaBeouf: Baldwin was “very disappointed” that LaBeouf leaked cryptic e-mails from his costars about his firing from the play Orphans.

“You expect communications to be private.”

The Felicity Fountain of Youth: “A decade after the drama ended, its stars still pass for college kids!” Which is funny, since they weren’t really college-aged even back then. “Felicity’s crush” Ben Covington, a.k.a. Scott Speedman, “looks as if he’s slinging lattes at Dean & Deluca in ’98.” It’s not that hard to explain. Felicity was the first J.J. Abrams show, and the Felicity/Noel/Ben love triangle is the model for the Kate/Jack/Sawyer triangle in Lost. One episode of Felicity was a black-and-white homage to the Twilight Zone, and the last five episodes of the series involved time travel to an alternate universe. What I’m saying is that Felicity was science fiction. Soft, gauzy, acoustic teen-romance sci-fi. And it was rad.

Kevin Bacon: “My daughter said to me, ‘Dad, can you please change that T-shirt? It’s too nipple–y.’ I’m not quite sure what it meant, but … I changed that shirt immediately.”

Kim Kardashian: “I’ve been watching shows like I’m Pregnant and Addicted to Meth. It definitely makes me feel better if I’m wanting one sip of Diet Coke … I’m like, this woman is on meth.” Is my dream of a Kim Kardashian stand-up career finally coming true? Hallelujah!

Ashton Kutcher: “I know exactly what films I’ve done that … suck … because I have friends who don’t hold back.” I will accept my refund for Just Married anytime, Ashton.

Michael Sheen & Rachel McAdams: Have split up! Love is over!

Hayden Panettiere & Wladimir Klitschko: Back together! Love is real! The Nashville star has taken up with the Ukrainian boxer again. They hung out in Hollywood, Florida, where “they cuddled and ate mahi mahi tacos. He won’t let her out of his sight.” That last sentence rings a little weird, huh?

Andy Samberg & Joanna Newsom: “Looks like Andy Samberg put a diamond ring in a box! The SNL alum, 34, just got engaged to longtime love Joanna Newsom, 31.” Singing songs in silly voices must have brought them together. The couple are the pride of the Bay Area.

Misc/Etc: “Done up for delivery.” “BROADWAY BRAWL!” “donned her famous blonde wig to meet son Kroy” “I wanted Lorenzo to know his mother is fabulous!” “she put on a wedding gown and renewed her vows!” “airing their beef publicly” “I think California drivers are the worst on the planet.” “I hate celery.” “English, Irish and Russian Jewish with a light dusting of Italian.” “a haunted house owned by a big ’70s rock band” “I’m so comfortable!” “Everyone wanted to do shots with Ben Affleck” “Sir sandwich!” “She smells really good!” “Zack Morris’ Six Pack” “hung with an anteater” “The guys race go-karts and the girls have craft day!” “SCENES FROM A SHIRTLESS LIFE” “We call her Plannie Annie”

Ke$ha: In her MTV show My Crazy Beautiful Life, the party rock star “takes bites of cannoli and then deposits the chewed dessert into her friends’ open mouths.” This should be disgusting, but it’s just making me want a cannoli.

Steven Tyler Snorted $6 Million Worth of Coke: Between the start of Aerosmith and his first rehab stint in 1986. No idea how much he’s done since then. “You could say I snorted half of Peru.” Charming.

Carmen Electra on Dennis Rodman: “It feels like a lifetime ago. We don’t talk anymore.” Man, I miss the late ’90s. She is still friends with Jenny McCarthy, by the way. She says they text frequently. Her favorite singer is Joni Mitchell.

Conan O’Brien on Taylor Swift: “In a new interview, Taylor Swift says ‘I never chase boys.’ Swift went on to say, ‘Once they escape from the compound, they’re free to leave.'”

The ‘Living Ken Doll’: Justin Jedlica is a 32-year-old who’s had 113 plastic-surgery procedures. He is terrifying looking, obviously. “I’m using surgery to create art. I’m customizing myself. I do this because I want to stand out. My surgeries have helped me build self esteem.” He was bullied as a teen for being gay and having a big nose. “I’ve never been a frivolous spender.” His partner “who owns an aviation business, has been helping with the medical business.” Justin says “He totally supports me.” Financially or emotionally? Also, Ahhhhhhhhhhhh.

Misc/Etc: “I am truly very sorry she has decided to take issue with what I know to be an accurate depiction of our time together” “taking this whole cougar thing a bit too far” “Growing up is awesome” “Fizzy water” “TOO YOUNG FOR SHOW BUSINESS?” “took scissors to the floor-sweeper after ripping it at a nightclub” “I feel like a regular dude” “not amused by the cold London climes” “texting while parenting” “The witches were traumatic!” “Kanye’s just jealous” “Putting on a show?” “Mario’s pregnant wife Courtney must be really understanding” “Jenny McCarthy, 40, guzzles whipped cream” “He’s a two-timer!” “too drunk or too much Botox?” “I think my mom is definitely drunk already. She is just such a freak.” “from country cutie to hipster hottie”

Sean The Bachelor: “What America sees, that’s what I am.” OK. “I work out five days a week and each day I’ll do a different body part, whether it be legs, back, shoulders, whatever.” OK.

Justin Theroux & Jennifer Aniston: “All she wants to do is be Justin’s wife. And she doesn’t care how they get there.”

Kendall Jenner: “Thank you … for the amazing sharpie tat! I loveeeee you’re amaz!”

Misc/Etc: “That way there’s no circus” “refreshing instead of musky” “Her acting is effortless, and she always makes it look easy” “Ladies: Ever dream of inhaling a little bit of Adam Levine?” “Paris is taking my breath away” “WOMEN IN WINTER WHITE” “Is Anne Hathaway trying to tell us something with that cradling pose?” “They painted their cakes with edible pink spray color and edible glitter” “COUTURE FOR KIDS” “a hot-pink lace collar” “I want what they’re getting because I think I work hard” “this laid-back Southern gentleman has just one request of his lady!” “Her whole business model has been built around a fishbowl existence.”