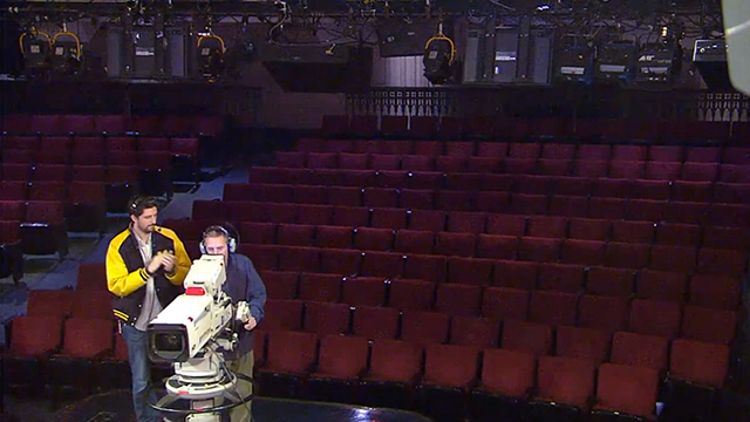 As the New York Times reports, Hurricane Sandy — the so-called Frankenstorm — wreaked havoc on the mid-Atlantic region last night: “Power remained out for roughly six million people, including a large swath of Manhattan … Bridges remained closed, and seven subway tunnels under the East River were flooded … A wind-tossed construction crane atop one of the tallest buildings in New York City still dangled 80 stories over West 57th Street, across the street from Carnegie Hall, after coming loose during the storm. The storm was the most destructive in the 108-year history of New York’s subway system.” And, tragically, “at least 11 deaths — including 7 in the New York region — were tied to the storm.”

Amid that looming threat, you would have understood if Late Night With Jimmy Fallon and Late Show With David Letterman, the two New York–based network late-night shows, had decided to cancel programming for the evening. (In fact, Jimmy Kimmel Live, which had transplanted itself from L.A. to Brooklyn this week, was forced to cancel, as did The Daily Show and The Colbert Report.) But Fallon and Letterman opted to stick it out, both playing to theaters eerily empty of live audiences, and both providing, in their own particular ways, some small, peculiar comforts.

Fallon, as is his wont, went big and goofy with his empty room. He punched through his jokes just as enthusiastically as he would have to a roomful of applause, and it actually played pretty great. Sure, yeah, at first it feels like announcer Steve Higgins and The Roots are cackling loudly just to be supportive, just to fill the space. But by the end of his monologue, Fallon’s wringing what appear to be genuinely irrepressible giggles out of his paltry audience.

Later, Fallon would deliver a bit about the one audience member that did show up: Mets Bucket Hat Guy. Jimmy and the dude have a little back-and-forth, during which Jimmy accidentally insults him, and we get three minutes of Mets Bucket Hat Guy somberly walking away out of the room over Jimmy’s protestations. Warm-hearted and thoroughly silly, it was perfectly in character for Late Night.

Meanwhile, Letterman, as is his wont, went much more caustic. Instead of fighting through it, he embraced the awkwardness, crafting a show full of forced laughter, bombed jokes, dead spots, and silence. It was kind of incredible.

You can watch the whole thing here. Letterman limps from segment to segment, with nearly imperceptible dark glee about how terrible they’re all going to do. At one point he cuts to a supposed live camera feed outside the Ed Sullivan Theater, and we see crudely animated footage of a New York City street underwater, peppered with floating city staples.

Letterman: “That’s a hot dog cart, and a guy … there’s a pretzel, there’s another guy … ”
Paul Shaffer: “You’re saying the theater is submerged?”
Letterman: “Yeah [long pause] I’m so sad that 500 people couldn’t be here to enjoy this.”

The “Rejected Names for the Storm” Top 10 was handwritten (supposedly the guy who operates the machine didn’t show), with an intern crouching underneath the desk toting signs up above to get the zingers in (“The new Hurricane Loco from Taco Bell”). And it’s not like he didn’t have perfectly good material (on how the campaigns are responding to the storm’s effect on the election: “Republicans reportedly have backup crooked voting machines”). He just had zero interest in delivering it straight. At the same time, he sent Biff Henderson out to the street in a slicker to talk earnestly about growing up in the Carolinas and living through hurricanes.

So, yes: a couple of bizarre, on-point performances from Dave and Jimmy last night. And not to make too big a deal about this, considering their minor importance compared to the commitment and sacrifices of the city’s rescue workers, but — commendable, too?

I was in my apartment last night in Prospect Heights, Brooklyn, and far from the heavy flooding. We saw insane images of floating cars on Twitter and heard horrible news about backup generators failing at city hospitals. But when we went and walked around outside, up by the Barclays Center and then farther down to the shuttered Manhattan Bridge, mostly we saw some felled trees and ambulances and a string of severe vehicles that looked like army Humvees. I felt almost guilty, feeling this safe. And that was pretty confusing. What was I supposed to be feeling right now?

New York Magazine‘s Joe Coscarelli, writing very nicely of the social media swirl around the storm, said, “Participating in and collecting up-to-the-second knowledge … can help to quell the fear that comes from being at the mercy of outside forces; being cut off from the world can be the scariest part. And so when the power does go out, as it did for so many last night, it’s now normal to reach first for a cell phone, not a candle, both for the light and for the comfort of knowing you’re not alone.”

Partially, Jimmy and Dave provided some of that same sense of community. Even more, for me, they reflected the strange ambiguity about how one should be acting or feeling. They managed to be funny while doing it, but they didn’t feel starved for laughs. Mostly, I think, they were shrugging: We have no clue what we’re supposed to be doing right now, so we’re just gonna do this? While the storm was raging, they went about their business.