Letterman Dares to Mess With the Lohan 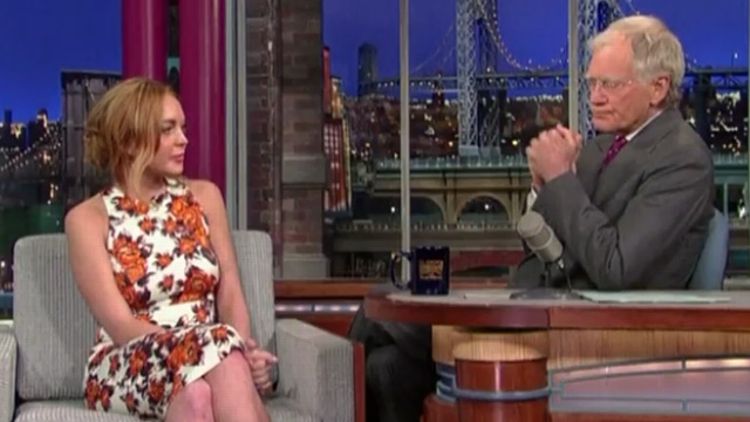 Lindsay Lohan was on David Letterman last night, ostensibly promoting the two Charlie Sheen–related projects she has coming out: a guest appearance on his cable sitcom Anger Management and a cameo scene with him in Scary Movie 5. She is also scheduled to report to court-ordered rehab on May 2. She did not bring up The Canyons.

This Lohan appearance makes the roster of all-time most awkward Letterman moments: Drew Barrymore stripping at the peak of her butterfly tattoo phase, Madonna and Sandra Bernhard freaking square breeders out, and purse-pilferer Harmony Korine. Lohan wore a tight floral dress that split the difference between Betty and Joan (Season 1), and got really clearly annoyed when Letterman starting asking questions about her upcoming rehab and history. Her attempts to steer the conversation back to her gigs failed, and Dave needled her like a passive-aggressive relative until she called rehab “a blessing.” Even those of us who enjoy interview anti-comedy like Zach Galifianakis’s “Between Two Ferns” couldn’t really find the humor in Lohan’s discomfort.

Lohan went on Letterman under the impression he would not ask about her upcoming rehab stint, criminal exploits, or basically any of the things that are still newsworthy about Lindsay Lohan. A visibly miserable Lohan wriggles through the interview with Letterman, noting that none of this came up in the pre-interview, because presumably she would have canceled if she had known she’d be asked about her numerous run-ins with Johnny Law. Letterman ambushed her, probably for ratings. He is famous for stunts. He asked Charlie Sheen about smoking crack earlier this year, which led to another one of Sheen’s sad honest talks about his meltdown, made even more absurd by the crowd’s laughter (which sounds sweetened). Letterman has never gone to rehab, at least publicly. But he fake-smiled through his own scandal when he was caught cheating on his wife with an employee, and he’s been in the New York entertainment world party scene since the ’70s, so you know he’s seen some bad shit go down in his lifetime. You can sense his grandfatherly concern for Lohan, but his detached interviewing style makes it feel sort of mean. After all, if he was really concerned, he would have asked in the pre-interview (which he probably does not conduct).

Lohan thinks she is still a huge star and deserves to be treated with the respect a Jennifer Lawrence gets, where the host sticks to praising your work and ogling your boobs. She thinks her private life should be left out of her career, even though her private life has ruined her career. It’s not Lohan’s tabloid antics that destroyed her reputation as an actor. Fairly quickly after Mean Girls she became famous primarily for her lack of professionalism. If she could show up on time regularly and turn out the work, she just would be a high-functioning addict like lots of actors (and people in other professions). Liz & Dick was proof that whatever acting talent Lohan once possessed, she is not currently a very good actor. She takes phony responsibility for her actions and then repeats her behavior in a frustrating cycle, but she is a serious addict with mental health issues who has grown up in the public eye. She stumbles and claims she was tripped. She told her attorney she wouldn’t start rehab until after Coachella.

It’s incredibly depressing every time Lohan fucks up and fails to change. She had so much promise and was so beautiful before the drinking, drugs, and plastic surgery. Her decision to start a pop music career was the first time I went “uh-oh,” and since then I have had the same unfortunate feeling every time she makes the news. It’s true that actors are much more often forgiven for transgressions, and their partying is generally considered cool and masculine rather than embarrassing and sad as long as their movies continue to gross. A person who is successful in the entertainment business will be surrounded by enablers immediately. Lohan’s biggest enabler, her mother Dina Lohan, has been damaging her daughter since she was old enough to sell. Child stars gone rogue are a timeless story and they almost never have happy endings. In the time it’s taken her to rise and fall (and fall, and fall), a billion new starlets have turned up to take her place. There’s no need for Lohan (born in ’86) now that we have Emma Stone (born in ’88), and there’s really no need for Emma Stone if we have Jane Levy (born in ’89). Lohan will always be famous, but it likely won’t be for her acting. Hopefully it won’t be because she died at Coachella and turned it into Altamont.

And the Latest Entrant to the NBC Late-Night Succession Chatter Is ... Alec Baldwin?!

The Elysium Trailer: The Space/Class-Warfare Revolution Will Be Televised