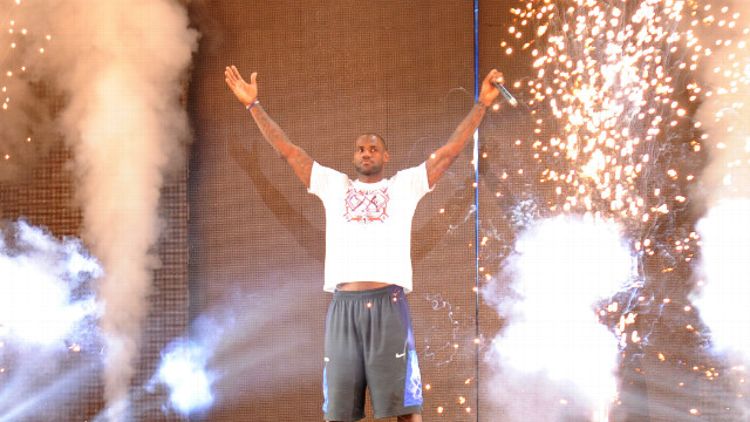 First things first: As much we might want it to, no, that doesn’t mean the show’ll feature a character named Shmebron Shmames who dunks on people for a living. James is plucking only from his experience as a successful dude who comes from a rough upbringing; the NBA and global superstardom and general “defining athlete of a generation” thing are not, it appears, part of the equation. Also, it’s called Survivor’s Remorse, and it’ll be coproduced by the host of GUTS. No, not Mo. The other one.

As the press release explains, “The series will explore the complexity, comedy and drama of an experience that everyone reads about, but few understand — what truly happens when you make it out. Through a combination of God-given talent and north Philly grit, Cam Calloway and Reggie Vaughn have achieved fame and fortune that neither could have imagined growing up in one of the toughest neighborhoods in Philadelphia. But success comes with its own challenges, and the cousins and confidantes wrestle with the rewards of money, stardom, love, and occasionally, the guilt of having ‘made it.'” It’s unclear who’s supposed to be who, and how, exactly, Cam and Reggie have gone about “making it.” But it is clear that the show is based on LeBron and Maverick Carter, his childhood best friend turned agent, business partner, and general-purpose Hand of the King type.

Says Bron Bron: “When my business partners Tom Werner” — not only a co-owner of the Red Sox but also a TV stalwart who’s had a hand in everything from The Cosby Show to That ’70s Show to The Life and Times of Tim — “and Maverick Carter brought up the idea of creating a television series that would capture the story of what happens when you make it out, I jumped at the chance. For Maverick and I even to be where we are right now, given where we came from, is kind of hard to believe. I felt like it was a story that needed to be told.” Also of note: “I have a deep passion for the amazing television being created right now,” said James. “I love ‘Boardwalk Empire,’ ‘Magic City,’ ‘Scandal’ and ’24.'” This would be funnier if 24 wasn’t getting a new mini-series and all, but still, you’re rattling off your finger-on-the-pulse credentials, and you name-drop … 24? 24??? LeBron’s Personal TV Watcher is definitely getting fired for this one.

Also listed as a producer here is Paul Wachter, who, Deadline explains, is “a prominent Los Angeles-based financial adviser [who] has been business partners with James and Carter since 2004 and with Werner since he sold the Padres as Werner’s investment adviser in 1995.” So how the hell did Mike O’Malley — who, yes, has gone on to do a few things since GUTS, including costarring on Yes, Dear and stints on Glee and Justified — get his foot in the door with LBJ and the rest of this money team? Who knows! But if you do see O’Malley popping bottles at LIV soon, don’t be too alarmed.

The last time LeBron dived into pop culture, it was pre–The Decision, with More Than a Game, the 2009 documentary on his high school basketball team. There was also the corresponding autobiography Shooting Stars, co-authored by future aesthete Buzz Bissinger (which Buzz later dismissed as an “epic failure” that “did not go into the hard, painful, gritty depth the book needed”). Most tantalizing, though, is the LeBron/Spike Lee team-up that never happened.

It was 2004, James’s rookie year, and talks were on. At the time, the AP quoted his then-agent Aaron Goodwin as saying “We’re still in the planning stages. We don’t have a script yet. We have a production team in place. Spike has been interested for months now, and LeBron is excited about the project.” For the record, Spike got Ray Allen for He Got Game in the summer after his own rookie year. Oh, also: Remember this?

So, are there any indications this show will be watchable? Or are we dealing with a classic bit of superstar overextension? Hard to say. Starz is far from the nonentity it once was (Party Down 4 ever), but it’s not quite your first stop for quality original content, either. Which is probably why the network was willing to take a flier on this thing: Partnering with a superstar on a questionable side project sounds just like the kind of thing a scrappy, ambitious up-and-comer would do. If HBO or Showtime had nabbed it, maybe we’d be thinking They must have seen something in that pitch meeting right now. With Starz, it might have been more along the lines of “Heeeey, that’s LeBron James!”

As for whether we, the public, should support LBJ TV: I mean, sure, why not? It’s not like, come February, LeBron is gonna be too bogged down in script notes to be able to check in against the Bucks. Whatever else, this’ll be interesting to monitor. I say welcome, Cam Calloway and Reggie Vaughn. Please entertain us with your north Philly grit.