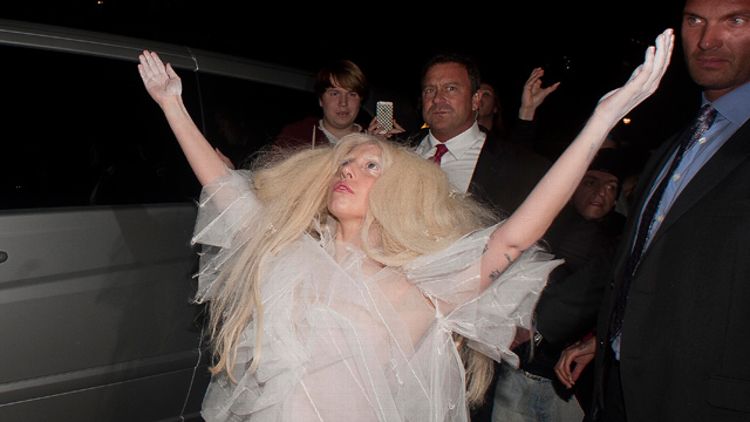 You and I have both read about plans to jettison celebrities into space — not because an international tribal council voted them off the earth, but just ’cause. They’re rich, space is there, they probably hadn’t seen Gravity before signing up, and maybe Richard Branson threw them some money. Who knows? I’m not even sure if a celebrity has gone into space yet. (Let’s see … all right, Branson is heading out on Virgin Galactic’s maiden voyage on December 25. Brangelina and Ashton Kutcher might also be onboard. Merry Spacemas, weird star-stew!) But now Lady Gaga will be “the first artist to sing in outer space,” according to Us Weekly. Kinda specious language — what if an astronaut-slash-artist happened to sing a few bars one time on a mission? — but let’s go with it. Or maybe let’s say Gaga will be the first to perform in space, because there’s no way she’d ever want to go up there in the first place unless she could be allowed to make a thing of it.

Here’s how it’ll happen: While the “Zero G Colony high-tech musical festival in New Mexico” (What? And is it held at Area 51?) is under way in 2015, Gaga will hop into a Virgin Galactic ship and sing a song in space. No gravity means no choreography, I’m assuming? Or will it be hyper-fabulous choreography? I’ll also optimistically predict that technicalities may force Gaga to go a cappella. That wouldn’t be a bad thing — the last time I was genuinely interested in Gaga was when I saw this piano version of “Paparazzi,” a piece of utter minimalism compared to everything that followed:

Us’s source says Gaga “has to do a month of vocal training because of the atmosphere.” Another quote: “The diva’s glam squad will join her in the shuttle.” I can’t speak to what a glam squad is, specifically, but space-wardrobe speculation has already begun at The Cut. To conclude morbidly, because I know it crossed your mind, Us’s source also says, “Gaga has taken out a ridiculous life insurance policy!”

The Marvel Way: How the Comic-Book Studio Chooses Its Directors

Q&A: Producer Jeff Bass on Discovering Young Eminem: 'He Was Sitting on the Toilet, and He Came Up With the Alter Ego'