Jay and Ye aren’t the only superstars at South by Southwest this week. Lady Gaga’s also in town, and she’s being more LADY GAGA than she ever was around the launch of Artpop last autumn. OK, she did get pretty wild again for a bit — a moss dress, a hazmat cape, a bunch of suit coats piled on like a silly hat — but nothing that left an impression like rolling up to the Grammys in a giant alien egg or … uh … whatever you’d describe this getup as. Something about that Austin air seems to have facilitated Peak Gaga, though, in all its forced outrageousness and head-scratching glory.

“You must feel a lot of pressure to come up with a unique outfit every time you do something,” Kimmel told the Human Formerly Known as Stefani Germanotta after she arrived in a pedicab driven by a beardo in a pink spandex suit. “I mean, really — it’s gotta be hard to top yourself all the time.” What followed was stilted baby talk, nine-inch platform shoes, and a dress and Pharrell-hat fashioned from nothing more than your everyday household coffee filters. TLGFO Meter Reads: 1/5 meat-dresses 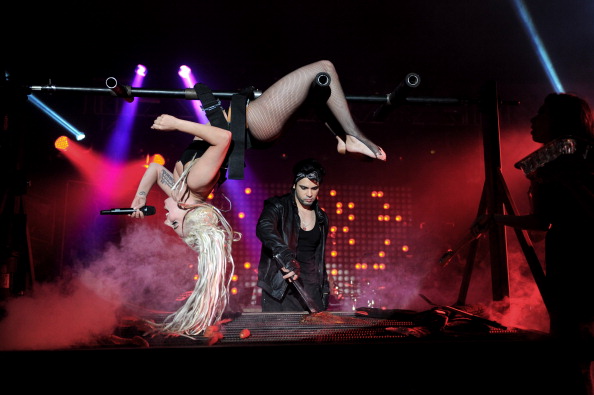 Keeping things very Austin-themed, Gaga “began her appearance at Stubb’s BBQ on Thursday night during the annual music festival and conference by roasting herself on a spit like a gutted pig as her dancers basted her with barbecue brushes,” the Associated Press reports. There was also “an attractive woman eating barbecued sausages in a provocative manner,” and NME adds that “leather clad men ‘tenderised’ [Gaga] by grabbing her bottom and thighs.” (So British to say “bottom” in this situation. Also: What the fuck.) The show was sponsored by Doritos, so not being dusted with Cooler Ranch spice was a major missed opportunity.  TLGFO Meter Reads: 3.5/5 meat dresses

Over and over and over, in a performance of “Swine,” Lady Gaga was puked on by a “vomit painter” who’d been drinking green liquid for this express purpose. (Let’s not fail to note the eerily dead-eyed nature the timeless artist assumed while repeatedly jamming her fingers down her throat.) Gaga and her buddy eventually mounted a mechanical bull, straddled each other, and did some more barforming. Gaga could be heard screaming things like, “I won’t play by your fucking rules!” and “FUCK YOU, POP MUSIC!! FREE YOURSELF!” TLGFO Meter Reads: 8/5 meat dresses (even though bodily excretions onstage aren’t anything new; grossed-out shout-out to GG Allin, plus the Black Lips in their salad days)