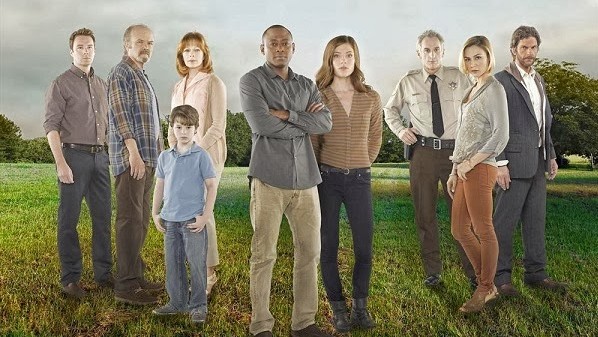 ABC press materials claim the source material for Resurrection, its unlikely midseason hit, is a novel by Jason Mott called The Returned. It strikes me that the more relevant book is The Secret. This season alone, ABC has debuted four dramas (Lucky 7, The Assets, Killer Women, and Mind Games) to ratings so low, they may as well have been nonexistent. So it would make sense for embattled network president Paul Lee to offer up a show with his own most fervently held desire right there in the title. Things have gotten so bad at ABC — which, like Grantland, is owned by the Walt Disney Company — that it almost doesn’t matter what Resurrection is about, so long as it brings renewed life to a flatlining network. Lee is hoping that simply by putting the title out into the world, it will come true. (Which is probably why proposed alternate names for the show included Miraculous Contract Extension, Les Moonves Stomach Bug, and Hey, It’s 2004 Again!)

Whatever voodoo Lee was hoping for seems to have worked, at least in the short term. Thanks to some provocative ads (and, if you believe my boss, canny music choices), Resurrection debuted to huge numbers last Sunday night: 13.3 million viewers and a whopping 3.6 rating in the key 18-to-49-year-old demographic. (By way of comparison, in January The Assets debuted to a 0.6 rating in the key demo — the lowest drama debut in the history of broadcast television.) These are the sort of ratings that can buy breathing room for a floundering executive and make a whole lot of other decisions suddenly look smarter: Resurrection’s debut also lifted the sinking numbers of once-promising ABC shows Revenge and Once Upon a Time. I wouldn’t say ABC is back from the dead, but these are promising signs of life.

If only Resurrection itself had a pulse. It’s not fair to the series — which hails from creator Aaron Zelman (Damages) and Brad Pitt’s Plan B production company — to compare it to the far superior, thematically similar French series Les Revenants (The Returned), which aired last fall on SundanceTV. But it’s simply unavoidable: Both are about the mysterious reappearance of loved ones who had died years before. In both cases, the returned aren’t spooky ghosts or ravenous zombies. Instead, they appear to be exactly as they were at the moment of their death and are extremely puzzled about how the world has changed and continued in their absence. Both Resurrection and Les Revenants concern themselves with the small moments of reconciliation and the big questions of reality that result from such an unnatural event. But only one of them makes a miracle feel as stultifying as the grave.

Resurrection begins with the story of Jacob Langston, a bucktoothed everykid who died 32 years ago when he fell into a raging river behind his parents’ Missouri home. In the pilot, Jacob wakes up, drenched and very much alive, in rural China. (A yak looks at him good-naturedly. It’s the most interesting supporting performance on the show.) Eventually, he’s returned to his stunned, graying family (played with the right mix of gentleness and awe by Kurtwood Smith and Frances Fisher) by J. Martin Bellamy (Omar Epps), a Chicago cop turned desk jockey for the Immigration and Customs Enforcement agency. Because this is a TV show, the small town the Langstons call home is burdened with a portentious name (Arcadia) and all sorts of twisty secrets. The accident that claimed Jacob’s life also killed his aunt; his return opens up plenty of old wounds about what really went on that day by the river, wounds that Jacob’s uncle Fred (who also happens to be the sheriff) and his cousin Maggie (who also happens to be a doctor/inevitable love interest) would rather forget. A day later, when a not so dearly departed member of the community (played by ace British brooder Sam Hazeldine) stumbles home, Agent Bellamy realizes he’s got a full-fledged mystery on his hands.

Resurrection’s magic would be hard enough to swallow as is, but the show does itself no favors by planting its flag deep in the uncanny valley of broadcast mediocrity. With its neighborly coffee shops, verdant ballfields, and outrageously attractive population, Arcadia is the latest example of the gauzy Pottery Barn catalog network television calls “America.” It’s a place where candles are always lit, throw pillows adorn every couch, and no shirt is untucked before its time. The all-white church where the Langstons pray appears to have been picked up from one of Liberace’s yard sales; the himbo pastor, played by Mark Hildreth, appears to be on loan from VH1 circa 2002. (Maybe dead careers are coming back to life, too?) Director Charles McDougall is clearly aiming for something universal — the better to contrast with the unsettling events that begin to occur — but he’s settled for plastic. Arcadia could be anywhere. Instead, it’s nowhere.

Everything here is surface, including the people. Jacob himself is less a character than an idea, a vintage sweatshirt made flesh. There’s no sense that Ma and Pa Langston have been doing anything for the past three decades other than waiting for him to return; there’s no depth to their mourning or subsequent acceptance. Instead, their emotional cues are as subtle as semaphore — Dad is out of breath from running after Jacob! Mom runs her hands lovingly over clothes she couldn’t bear to throw away! — and even those are larded with gauzy flashbacks to The Way Things Used to Be. On Les Revenants, the lives of the survivors are revealed to be nearly as brutal as their loved ones’ deaths. But here they’re each as empty as the grave.

Thank goodness for Omar Epps, whose steady, credulous performance as Marty Bellamy elevates everything around him. This Sunday’s episode hands out Lost-like speeches about “truth” as if they were apples; nearly every actor takes a huge bite. But Epps alone chews over his words thoughtfully, giving them a weight they otherwise would lack. His intelligent empathy was a boon to House for eight seasons; here it’s as essential as oxygen. But not even he’s capable of breathing enough air into something so stiff. Resurrection manages the neat trick of making death and life seem equally suffocating.

After one week, the show may be a hit, but I have serious doubts about its long-term survival. The characters aren’t rich enough to support a turn inward; the risks of revealing yet another silly “conspiracy” are too great, should the show expand outward. Paul Lee may think he’s tapped into ABC’s proud history of sudsy, thought-provoking fare, but it seems to me he’s picked up the network’s far more frustrating habit of asking cool questions without worrying much about the answers. (Unless that yak escaped from a research facility where it was fed a steady diet of fish biscuits, Resurrection appears to have a lot more in common with duds like The Nine and FlashForward than our merry Island castaways.) In the short term, Resurrection has proved able to return both people and network to life. The hard part, of course, is knowing what to do with them once they’re back.

Video on Demand Report: Invite 'Llewyn Davis' and 'Veronica Mars' Into Your Home