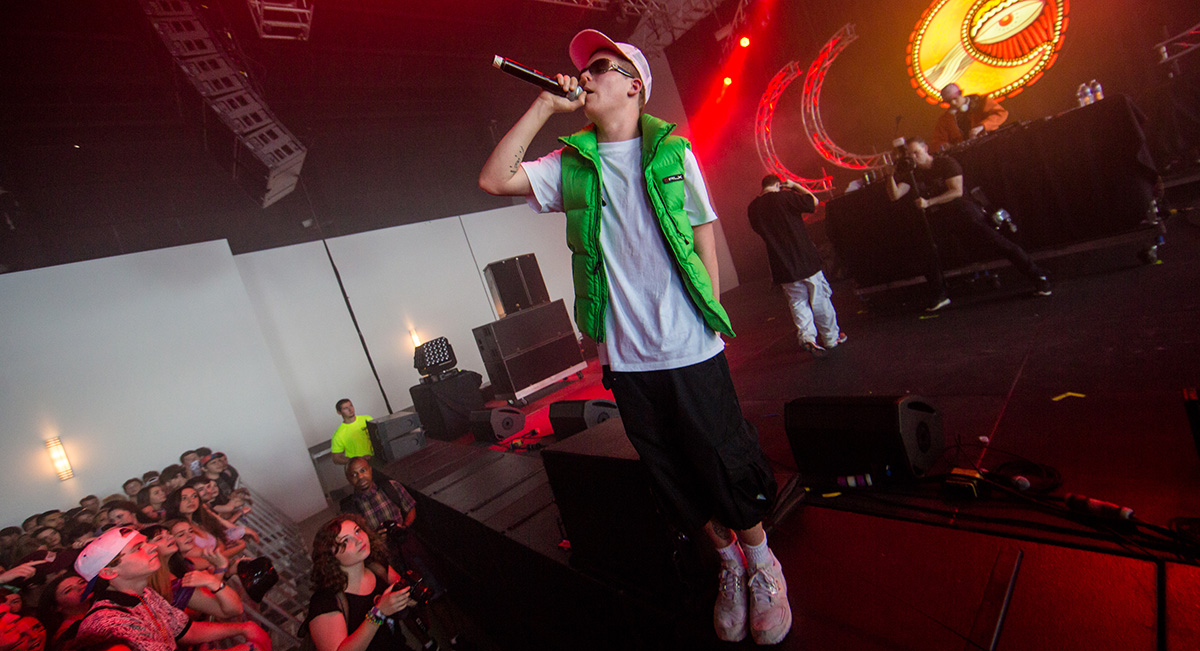 This is why I wanted to interview rapper Yung Lean, born Jonatan Leandoer Håstad (c. 1996) in Stockholm, Sweden.

This cuts deep. This makes me feel old. Creaky, even. Sure, his SoundCloud popularity, his Internet cult fame, his musical stylings, and the fact that his crew calls themselves the Sad Boys all intrigued me. But really, I just needed to talk to this 18-year-old and get a sense of what that life is like at this moment in time.

Lean was briefly in Austin for SXSW, playing a perfectly SXSW event — Tumblr’s annual SXSW Fuck Yeah Party, sponsored by Entourage, as in the show/movie/ideology Entourage. We spoke across the street from the venue, tucked away from his fans.

I was expecting not to like Yung Lean. Most of my interactions with 18-year-olds take place on the New York City subway once’s school is out, as they loudly sniff out prey to terrorize for 10 to 12 stops across the five-borough region. Eighteen-year-olds are up there among my least-favorite people on earth. But I also knew it could go the other way, and I’d leave unofficially adopting Lean as my younger brother and taking to occasionally leaving inspirational quotes on his Facebook wall.

There really was no way to tell until I showed up and talked to the Sad Boy himself.

Is this your first time coming to South by Southwest?

What did you know about it going in?

I know it’s a festival. I know some people that throw parties here. I’ve heard that it used to be better a couple years back — more local and stuff. I know it’s kind of a private thing as well — it’s like, all the fans can’t get into stuff. But it depends on what company you play for, I guess.

Click here for all of our interviews with fascinating people from the worlds of sports and pop culture.
That’s why we said no last year, actually. When I started really getting into music and shit, stuff like The Fader and Fader Fort, there were a lot of Swedish bands playing here in, like, 2009. You remember the Tough Alliance cover? And all of them probably played S-X-S-W.

How’d you determine which events to play down here? Why’d you pick the Tumblr showcase?

I wanted to participate in all South by Southwest, but had to leave early for Tokyo Fashion Week, so at the end of the day it was a scheduling issue. But it was good to collaborate with Tumblr on the party.

One of the things I like about Austin during this time of the year is running into people I know in the streets. It’s an overwhelming week, so I think you can be cynical about it, but it’s also fun.

You feel the heart of Texas here in the streets. It’s good. We were just in New Orleans for three days, for Super Sunday.

New Orleans might be the most fun place in America.

I fuck so hard with it. Everyone’s so nice. We recorded a bunch of songs there, with some of the engineers from Young Money/Cash Money, in this beautiful house. We don’t have that vibe of community. They have little yard parties and whatnot.

I moved out of my parents’ house to a place that’s more like, the projects, because I’m living by myself.

How far is it from where you grew up?

It’s 17 minutes, with the subways. That’s like 10-12 stations. It’s by where I used to buy alcohol when I was 15 — the places where the parents say “don’t go.” But everyone is really nice. And I felt that vibe in New Orleans; some parts of Stockholm are like that.

Atlanta, which is where I’m from, has similar aspects. You been down there?

Yeah. We played a show out there. I want to go back there and just work. Be there for like a week. That’s the most interesting rap city right now. I’ve worked with Metro [Boomin] and I’m in touch with Sonny Digital. I just want to go down there and feel the vibe. We were there and just played and left. We rode through the city, though. Did have a good time.

People really get into shows down there.

They were going HAM. Every fan was kind of special; we were doing meet-and-greets and shit and would just bring in all these kids, and it was great to just chill with them. And they were all really into it.

Are you working with or close with any of the Atlanta rappers?

I’m good friends with OG Maco — keep in touch with him.

I think the Awful Records crew with Father are great.

Oh yeah, me and Father were going to link up in Miami, but I don’t know what happened. They’re going to take over. But on the other side, it’s also fun. Peewee Longway, Jose Guapo, they’re really good as well.

How many are you traveling with, typically?

How many people came to Austin?

From my crew, five. Because we’re just working on a mixtape in the U.S. right now. So five Swedish boys. But when we’re on tour, we got more of a crew.

How long are you in the States?

We came to the U.S., did three shows, and then we just stayed in Miami for a month, just working. Now we’re just doing one-off dates. We just go to a city, play, get out. Just to make money, and not to tour. Touring tears you down. It’s fun to go around the world with your friends, but physically and mentally it’s like …

Two summers ago, I drove around the country for Grantland. And the one thing I didn’t realize until that moment is how tiring it is to just sit, for hours.

That’s the tiring part. I get energy from this — performing. I get energy from meeting people. Sitting, and standing up, and holding your passport and luggage, that’s what tears you down. You can’t be relaxed. If you fall asleep, you have to wake up in an hour. That’s where the health stuff starts.

So the playing of the show is actually the recharge?

That’s what I get energy from.

One thing that I think is unique about you is where you’re doing shows. Most people touring internationally don’t get to that point until they’re at the very top. But you’re doing SXSW, going around the U.S., but also doing shows in Russia, in Mexico.

I’m really like a rat in the rap game. I just drop stuff when I feel like it. Yes, I’ll do a tour and wear myself out, and drop an album to do the tour, and go crazy off that. But this isn’t the peak. I want to work and build a career that’s steady so I can live off this and still do what the fuck I like. I was like, I want to go to places like Mexico and Russia. And if you get that opportunity, you have to say yes. I have so much respect for people out there, just talking to locals, doing local shit like playing bars in Mexico City, drinking mescal with these 50-year-old punk guys. My people getting talked to by the police for pissing in the street. Just riot shit, rock star.

Yeah. I can retire at a good age and still feel like I’ve done something. I’ll probably be depressed as fuck when I’m 30.

I’m looking at you, losing my mind that you’re 18. There are people a little older than I am who are looking at me crazy for being at SXSW so long. But there’s this idea that I constantly think about, which is this idea of doing it while you can.

That’s the motto. Doing it now. You just did an interview with Obama; what if you would have postponed that — nah, I can’t get to Washington.

Sorry, I have a meeting.

It was great though.

I wanted to ask you about that. You don’t have to put it in the interview, but how was it?

It was stressful, but I think all the other things I’d done up until that point helped prepare me for it. So that felt nice.

That’s a really good synonym because you walk through all those rooms and people guide you and then you just go into a big room and there’s one thing to do. You’re seeing him. He’s right there.

Exactly. Also, if you ever get a chance to fly on a presidential plane, I suggest you say yes.

You know there’s one Swedish band that has met the president.

Ace of Base. They met what’s his name — Clinton. He was a fan.