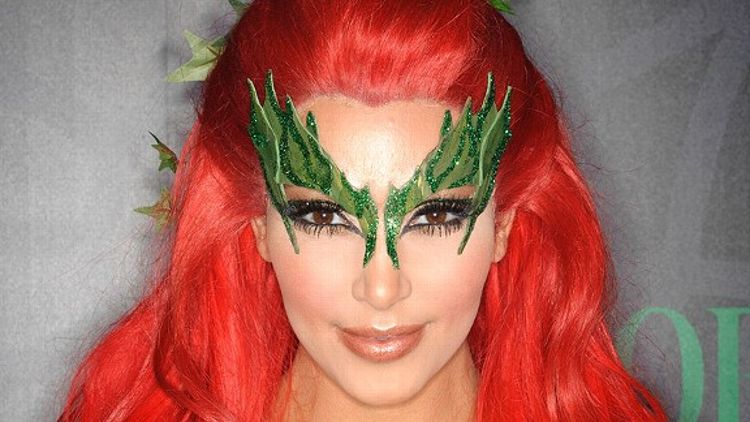 1. Kim’s Divorce, of course. “When a subdued Kim Kardashian, dressed in a skin-tight Poison Ivy costume …” Wait, stop right there. I can’t. I’m sorry. I just can’t. How can a human being be subdued in a Poison Ivy costume? Depressed, maybe. You can be depressed in a slutty costume, sure. But subdued? A Poison Ivy costume is the exact opposite of subdued. It says “LOOK AT ME I AM A SEXY GINGER PLANTMONSTER!!!” I guess I always saw Kim as kind of a Katwoman, because she’s more of a Selena Kyle (out at galas, interested in jewels) than a Dr. Pamela Isley (alone in the lab with her plants). Oh, I guess she did that two years ago. Anyway, Us suggests she dumped Kris Humphries not for any of the reasons we all assumed but because he made a bad investment in a company with a friend of his, which is now the subject of federal fraud charges. A shrewd businesswoman to the core. Maybe Kim should date Nucky Thompson.

Kim on Kris Humphries in happier days: “I feel so tiny and small and so protected.” Kim’s friend: “I actually respect her more for not staying in something that wasn’t right.” She almost called off the wedding. He told Kim that she should move with him from L.A. to Minnesota because “by the time you have kids and they’re in school, no one will care about you.” Meanwhile, the villainous Kris Kardashian recommends her favorite books, which are: an Elizabeth Taylor biography, a book called Dollhouse authored by the Kardashian sisters, the Bible, and a Rohinton Mistry book she definitely read through Oprah’s book club. And in People magazine, “decked out as the Batman villainess Poison Ivy, a subdued reality queen addressed nonstop chatter.” SERIOUSLY?

2. Justin Bieber “Is the Father of My Baby”!!! All the best quotes therein:

A. “The 17 year old ‘Baby’ hit maker is the father of tiny Tristyn Anthony Markhouse Yeater.”
B. “I agreed to go with him and on the walk to a private area in the Staples Center. He told me he wanted to make love to me and this was going to be his first time.”
C. “Justin Bieber found a place where we could be alone, a bathroom.”
D. “We went inside and immediately his personality changed drastically. He began touching me and repeatedly said he wanted to fuck the shit out of me.”
E. “I asked him to put on a condom for protection, but he insisted that he did not want to. In his own words, he said that because it was his first time he wanted to feel everything.”
F. “The sexual intercourse itself was brief, lasting only approximately 30 seconds.”
G. “He was clearly embarrassed about how the sex did not last very long. He immediately put on his clothes and blew me off when I asked about seeing him again.”

3. Jessica Simpson is pregnant. She “hasn’t had any morning sickness.” Before pregnancy she favored tequila cocktails. Like Beyoncé, she insists on being pregnant in heels (ahhhhh). She called off the wedding because she was “too big to get married.”

4. Sandra Bullock bought her son a Warhol. Am I the only one who sometimes imagines Sandra Bullock’s monologues to her infant child? It’s like a movie that almost exists but it’s all in my head and is a composite made from parts of other Sandra Bullock movies. “Well, looks it’s just you and me, Louie.” Or wait, that’s just Casablanca. Also, she had dinner with old friend Keanu Reeves, “a man she always relies on in times of loneliness.”

5. Demi and Ashton. “She’s totally humiliated and angry, but she doesn’t want him to leave her.” When they met, “Ashton had just fallen off the turnip truck” (what?). She developed a “party-wife” reputation. What is a party wife? Oh. Duh. “When you meet her, the insecurities just spill out.” Sidebar: Ashton Is Sad. According to In Touch, Demi was schtupping one of Ashton’s bros, named Ben Hollingsworth, having “wild sex in his car” and “rubbing it in Ashton’s face.” Better yet, she met dude on the set of a movie where she played his mom. She “showed him some good times that he’d never forget” and “it became clear that Demi’s interest in Ben was something other than maternal.” She lured him over by letting him smoke weed at their house (like a cool mom — smooth). And then “on one fateful night she unleashed her inner cougar.” While Ashton’s career posed a threat to “her fragile ego,” she could “bask in the attention of an aspiring, awed actor — an ideal situation.” But then he got nervous and called it off.

Best Pictures: A nostalgic shot of Simon Cowell and Ryan Seacrest on Jet Skis from a story about their rocky friendship; Jenna Bush as Frida Kahlo; Amy Poehler’s passive-aggressive fake smile when getting paparazzied with her kids; Kristen Bell reading David Mamet’s Sexual Perversity in Chicago is this week’s high literary reference; Tom Cruise’s son Connor, a.k.a. D.J. C-Squared, has “emerged as a mainstay on L.A.’s deejaying scene.”
Actual Story: A comparison quiz of Gisele and Gwyneth Paltrow’s hilariously elitist quotes about motherhood. Gisele: “When my son eats broccoli, he thinks it’s dessert!” Gwyneth: “I don’t find it tough to make my own baby food.” And securing her place as main Heather for life: “A lot of people get pregnant and they can turn into garbage disposals. I was mindful and only gained 30 pounds.” (Another sidebar involves Gwyneth beating her children at bowling. LOL.)
Inane Sentence Fragments: “So Kudos to Hilaria” (Alec Baldwin’s 27-year-old yoga instructor girlfriend is named Hilaria Thomas). “Kelly Clarkson eating rock shrimp.” “[Kristen] Stewart still has a firm grip on [Robert] Pattinson’s leash” — this better be literal! (If it is, it’s pretty hot.) Salma Hayek says she and Antonio Banderas “are magnificent fighters.”
Miscellaneous: From the “25 Things You Don’t Know” about Kal Penn: “One of my favorite books is The Mole People.” He also likes Nascar. A mention of Mindy Kaling’s idea for a Ghostbusters reboot starring herself, Emily Blunt, Taraji P. Henson, and Natalie Portman. Jonah Hill’s humblebrag about sending something intended for his “Dr.” to “Drake.” Coldplay’s Chris Martin on the Colbert Report on being compared to Radiohead: “We’re not as good musically, but we are more attractive.”

Best Pictures: Rachel Zoe holding her miserable-looking baby; 53-year-old Sharon Stone in shorts looking super hot; Jennifer Aniston dancing ecstatically; Parisian ballgowns made from candy; angry cat in Hello Kitty Little Red Riding hood costume looking super angry because it has a basket taped to one paw.
Actual Story: “Hey, Is That A Vest Or A Bath Mat?”
Inane Sentence Fragments: “That whore Brandi,” “Diet and exercise cannot overcome the power of genetics,” “everyone in leopard jeans.”
Miscellaneous: Jennifer Garner’s dog is named Martha Stewart, Denise Richards will be on 30 Rock, Camilla Bowles is jealous of Kate Middleton’s “beauty, popularity, and closeness to the royal family,” Jersey Shore‘s Ronnie attacked a disabled guy, and a close-up picture of 21-year-old Emma Watson’s cellulite (just fucking shut it down. Shut everything down. As a culture we are past help). Oh, okay, here’s an uplifting thing. The no-longer-closeted country star Chely White: “One day, I realized I had amassed all this fame and fortune, but I was like Miss Havisham, living in a big old house with lots of stuff but I was all alone, nobody knew me.”

Best Pictures: Sinead O’Connor hugging Debbie Harry; Amanda Knox on Halloween dressed as a dude with a drawn-on mustache; Regis Philbin’s fan gift of a painting of his late cat Ashley’s face on a stone; the Green River killer holding two poodles in a pastel Florida t-shirt and cutoffs.
Actual Story: “Prince Charles is kin to Dracula”
Inane Sentence Fragments: “The day of their engagement the couple celebrated with — what else? — glittery ponies.” (Kim K. and Kris, of kourse). “We did it all: the parade, the rides, meeting Mickey.” (Jason Aldean) “SCAN THIS TAG WITH YOUR MOBILE PHONE TO WATCH A VIDEO INTERVIEW WITH THIS SEXY MAN.”
Miscellaneous: As a boyfriend George Clooney was “fatherly”; Bette Midler is auctioning her most famous costumes and “wants 1000 drag queens to get the whole set and go on the road”; “known for using men for target practice, Lambert takes aim again” (from a four-star review of Miranda Lambert’s new album). Regis Philbin: “When I first started, I thought I was just lucky to have a job at all. I was not that confident.” Genuinely absorbing profile of the Green River killer’s wife Judith: “I found out he’d had the carpets removed because he’d killed women on them and there were bloodstains.” AHHHHH. “Despite what she describes as their very active sex life, she discovered that on many of those supposedly work-related late nights and early mornings, he was actually out hunting prostitutes.” AHHHHHHHHHH. “A neighbor refused to give back one of her cats and said “you’re married to the Green River Killer, you can’t have it back.”

Best Pictures: Salma Hayek’s four-year-old daughter looking epically bored on the red carpet at a premiere; Kim Kardashian looking subdued in a strapless white dress with musical notes printed on it; 4 full pages of celebrities with their dogs.
Actual Story: “Can Crying In Court Help?”
Inane Sentence Fragments: “The No-Pants Look”; “Courtney Was An Older Mom”; “the couple also walk the walk”; “I love dressing up as Disney princesses” (Holly Madison); “she was a real trouper as she partied” (Kim K); “this was the first time the public had noticed the scar” (Kate Middleton).
Miscellaneous: “Jen still eats healthy, but Whole Foods has a lot of amazing vegan desserts.” Beyonce’s weird pregnancy cravings for bananas with ketchup. Kim K is “embarrassed.” Afat-shaming portfolio of stars who’ve gained weight. Rob Pattinson will be “literally surrounded by models all trying to get close to him” and “doesn’t care” because he is so into Kristen Stewart. Prince Harry “loves to party.” Another fascinating true-crime murder case (the death of Rebecca Zahau). Miss Piggy’s collection for MAC. Justin Bieber’s new bangsless haircut.

Previously: Jennifer Aniston’s Imaginary Wedding, and Other Tales From This Week’s Gossip Magazines