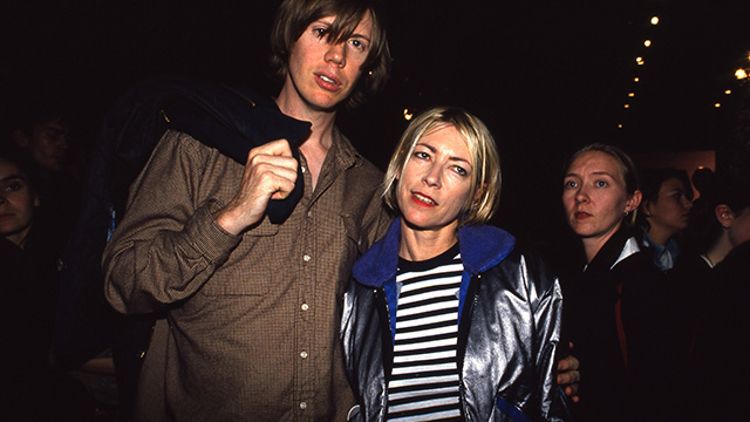 So art-punk godparent Kim Gordon talked to Elle‘s Lizzy Goodman about her 2011 split with husband and longtime Sonic Youth bandmate Thurston Moore. Said split shook indie-rock America’s faith in artistically collaborative couplehood to its foundations, but if this interview is anything to go by, the most shocking thing about the breakup is how conventional it all was. Gordon tells Goodman that her marriage ended “in a kind of normal way — midlife crisis, starstruck woman.” At some point Gordon found a smoking-gun text message and “confronted [Moore] about having an affair.” I mean, c’mon, a text message? Is there any less avant-garde, more standard-tuning way to cheat on your wife and get caught?

Moore (who declined to be interviewed for the story) and Gordon went to a marriage counselor, but according to Gordon, Moore continued seeing the other woman. “We never got to the point where we could just get rid of her so I could decide what I wanted to do,” Gordon tells Goodman. “Thurston was carrying on this whole double life with her. He was really like a lost soul.” Gordon got over the breakup by staying home and listening to a lot of hip-hop, and if this story has one major flaw it’s that we’re never told what kind of hip-hop, and are thereby robbed of a specific image of Gordon, 59, thrashing around her former marital bedroom to Chief Keef — or hiding under a comforter with “Song Cry” on repeat, as the case may have been.

Gordon “declines to name” the other woman, but by identifying her as Moore’s “partner on a literary project” she almost-sort-of does. I did the gossip-Googling, I saw stuff, it didn’t make me feel any better. This is, it should be noted, a 2,500-word story in which 400 of the words are about Moore and/or Other Woman X, and the parts that are not about that are a succinct and thoughtful portrait of a toweringly influential and unimpeachably cool artist, and you should go read it. It contains laudatory secondary quotes from Bikini Kill’s Kathleen Hanna, as well as the words “Pussy Riot,” two things I’m going to go ahead and guess do not turn up in the pages of Elle all that often.

Full disclosure: I know Lizzy Goodman, kind of, from when we both lived in New York and worked in the terrarium-size world of New York rock journalism. We have +/- 38 acquaintances and friends and (ex)-co-workers in common, and once, nine or 10 Coachellas ago, she and her then-boyfriend let me crash on the floor of their hotel room. Also, writer Jon Dolan, who’s quoted in this piece and ID’d as “one of the flintiest rock critics around,” was my first editor at Spin and is still a friend, as well as a Grantland contributor, and yesterday me and my friends who also know Jon Dolan blew a bunch of work hours on e-mail joking about Jon being “flinty,” an adjective I’ve always associated first and foremost with Murphy Brown.

The most important disclosure here, though, is that while I’ve never met Moore or Gordon I’m completely incapable of being objective about them. When I was 18 I wanted to move to New York because it would increase (albeit by some statistically insignificant percentage) the likelihood of me becoming friends with Kim and Thurston; I’m still mourning the death of the idea of them as a them. So it’s hard to focus on the merits of this story as a profile of an individual; I get hung up on details, like that Moore and Gordon aren’t officially divorced yet because they own a lot of books and records and art and the appraisers haven’t finished going through it. Nothing sadder than the image of underground rock’s most glamorous collector/curator types dividing up their vinyl, just like normal exes do.

Afternoon Links: Surprise! There Were a Few Idiots at Coachella This Weekend