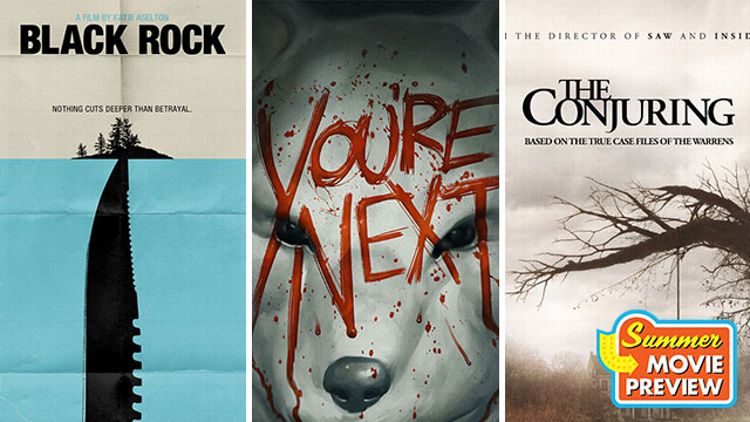 I have barely recovered from watching Hemlock Grove, so when I started compiling this list of 10 horror movies I’m interested in seeing this summer I felt kind of like I was trying to cure a hangover with a gin and tonic. I’ve included a couple of picks that look like they might be enjoyably terrible just in case I find myself ready for masochism again in a few weeks but, honestly, I think it might be a while. At least there’s The Purge and The Conjuring, both of which look pretty exciting, and a couple of intriguing oddities too. Summer break forever, bitches! Let’s get scurred like Selena.

The Lords of Salem

Why should I care? Well, the box office results are in, and I guess we didn’t care that much. Rob Zombie’s latest feature was clearly a passion project, and though its release was plagued with delays and it gets a lousy 42 percent on Rotten Tomatoes, I support the thematic marriage of disc jockeys and witches.

Why should I care? Because these things are innately terrifying: B&B’s, cuckoo clocks, lepidopterists in khaki vests, and eating dinner with strangers. D.W. Young netted praise for his 2010 short Not Interested, and he’s also responsible for a 2008 documentary about an empty lot in Red Hook.

Why should I care? Handcuffs, peep holes, exploding cars, and murderous plastic wrap — the trailer’s packed with all the necessary ingredients, and Kitamura had some success with the 2008 Bradley Cooper vehicle Midnight Meat Train, but reviews indicate that this one seems like a good contender for hate-watching. Collider gave it an F for, among other crimes, hiring “a few real actors rather than having the whole cast be terrible.” IGN really seemed to hate it (“the script is just a mess”), but for whatever reason gave it a good rating (7/10) anyway. What’s that about, IGN? You just can’t make an upcoming horror-release list without at least one item referred to as “soulless garbage.” It’s the law. Fines are handed down.

Why should I care? Three childhood friends hop aboard a boat and sputter off to an island (!) to hang out, “just the three of [them],” for a weekend getaway spent bonding in Maine-appropriate sweaters, picking blueberries, and not getting raped or murdered at all. Cue three rangy-looking dudes who happen to be chilling on the same island with guns, scary-man outerwear, and sparse beards, and who eventually set about terrorizing the women after a hookup goes awry. I’m mostly down with this one because Mr. Mumblecore, a.k.a. Mark Duplass (Aselton’s husband), wrote the screenplay and it has a chilling, pretty poster. The funds for this project were partially Kickstarted, if you’re the type to keep track of that kind of thing. (At this point, when a movie isn’t partially Kickstarted it almost seems lazy.) Get some rare baby alpacas for your background actors to hold like babies, splurge on a couple of crazy Philip Treacy hats for your leads, toss in a Tom Cruise cameo as a passerby in a paddle boat.

Why should I care? Because your friend in med school who wants to drop out to pursue her passion for stripping could use a stern warning. The Soskas are the Canadian twins entirely responsible for Dead Hooker in a Trunk, which they wrote, directed, produced, and starred in. American Mary deals heavily with underground body-modification surgery, a thrilling topic even before you remove anesthesia from the equation and start plucking off people’s nipples and removing their labia. Don’t waste that labia, Mary! Someone will want it. You never know when you’ll need extra. The fact that this movie has a 68 percent rating on Rotten Tomatoes despite all of the words that came before this sentence means that it has to be something special.

Why should I care? You already know the answer to this question: Max Braverman, Cersei Lannister, and Troy Dyer live in a world where crime, including the really bad kind of crime, is legal one night a year. Fortunately, the family lives in a sprawling McMansion with cameras and a complex security system; unfortunately, all this means is that they can see their various assailants taunting them before the villains break in and torture them. This is the closest thing we’ll ever get to a <Game of Thrones/Parenthood/Reality Bites Venn diagram overlap, so enjoy it. Also, this trailer is boss.

Why should I care? Because you liked V/H/S, and the sequel is rumored to be better? Because you love found-footage anthologies? Because its enthusiastic fans make stop-motion title cards, there’s a cult plot, and even if it’s terrible, it’s got 21 fewer plots than The ABCs of Death? Yes? Yes? Yes.

Why should I care? The story is based on the real (cough) experiences of Ed and Lorraine Warren (Wilson and Farmiga, respectively). Ed, a demonologist who died in 2006, and Lorraine, a psychic, were involved in the Amityville Horror case and assorted other spooky happenings (exorcising werewolf demons, for instance, or assisting the Smurl couple after they’d been sexually assaulted by ghosts). The trailer for The Conjuring boasts that the movie uses the most “disturbing” item in the Warrens’ toolbox, and because it’s directed by Wan (Saw, Insidious), we at least know that it will be told in the absolute gnarliest way possible. Bonus points for Farmiga’s baroque ruffled collars, which as everyone already knows are irresistible to retro spirit fashionistas.

Why should I care? Only assholes make a big thing out of celebrating their wedding anniversaries with a lot of fanfare. Punish them! Punish them with a gang of sadist interlopers, and a really sour chardonnay! After a good reception and a handful of wins on the festival circuit, Lionsgate swooped up this horror film and recently embarked on a pretty great publicity campaign by poster-bombing Peeples and The Big Wedding billboards with a shadowy, masked character from You’re Next.

The Mortal Instruments: City of Bones

Why should I care? Because the adaptation of Cassandra Clare’s young adult series is coming for you, with a prequel to City of Bones already in development. It was just my duty to warn you.