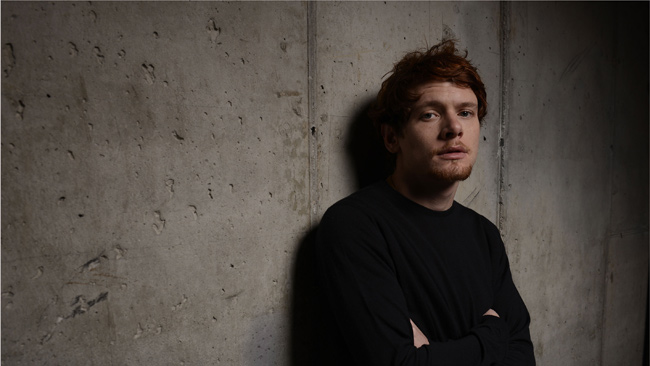 There’s a fair chance that by Christmastime this year, Jack O’Connell will be too famous to be sitting in the same room as me. In the years since his punch-drunk turn on the druggy teen drama Skins, which made him a star in his native U.K., O’Connell, 23, has picked his way to a kind of Young Hollywood precipice. What that looks like is a busy hodgepodge. He stars in British indies like Starred Up, the lean prison flick that premiered at this week’s Tribeca Film Festival in which he takes over nearly every scene. He cameos in Hollywood blockbusters, like the 300 sequel, for which he just turned in a supporting popped-top role. And O’Connell’s name gets bandied about: According to the trades, the casting short lists for the Star Wars: Episode VII and The Fantastic Four featured him.

On December 25, prime Oscar season, Unbroken — a throwback, gauzy, $65 million true-will-of-the-American-spirit-type aspiring-four-quadrant-blockbuster — hits theaters. It’s directed by Angelina Jolie, it’s written by the Coen brothers, and it stars our lad Jack. And it could well instantaneously shove him to the very front of that Young Hollywood pack.

“People are saying some pretty mad things to me in terms of what they foresee,” O’Connell says, in his impossibly perfect laggard-tongued Derbyshire accent. “Those who have experienced it, or know enough to advise me on it. It is the quiet before the storm, I guess.” We’re on the 17th floor of a mid-level Manhattan chain hotel. The hallway outside, already claustrophobically narrow, is littered with camera cables and confused reporters and sleep-deprived movie publicists sprawled on the floor and jitteringly thumbing Samsung Galaxy S5s into obliteration. And O’Connell, in a small and empty corner room, is alone, something that may prove more problematic in the coming months. “I’m outdoors more than ever, just trying to cram it in,” he admits. “Being day to day, being able to disappear amongst people.”

And then, he waves it — it being the theoretically looming specter of global mega-fame — off. “I’ll have my disguises, I’ll get from A to B. But it’s not particularly daunting because I don’t wanna entertain that. I’m not really that fooked by it, man. To me, that looks after itself, provided the work’s all correct.” All in all, it’s a more self-serious young man that I meet than the one I was expecting. But then, I was expecting Skins’ James Cook.

Skins was a strange, thoroughly British entity: a teen show, largely scripted by teens, that was as cuttingly explicit about sex, drugs, and sadness as anything else you might see on TV. And with all respect for its well-pedigreed alumni _ which includes Dev Patel and Nicholas Hoult, Jennifer Lawrence’s boyfriend — no one ever quite matched the luminescent, leering mania of O’Connell’s Cook. As a preposterously ramped up “bad boy,” Cook was almost like a baby Tyler Durden: He talked like you wanted to talk, he dressed like you wanted to dress, and he, um, made love like you wanted to make love.

Over the course of the show, with gloriously reckless abandon and a perma-crooked cackle, he’d drink, fight, steal, cheat, snort, and sleep with pretty much anyone that would have him. Or, as the Parents Television Council’s very helpful synopsis put it: “Typical content has included Cook receiving a vicious beating at a party; Cook finding his nemesis White strapped to an S&M rack in a brothel, where Cook sends electricity through the man’s nipples and punches him until he is bruised and bleeding; and the entire group getting high on liquor and hallucinogenic mushrooms.” This being Skins, of course, all that nutso debauchery was layered on a crisp bed of fresh greens self-hatred, heartbreak, and despair.

“He’s probably the most similar character to myself that I had the good fortune of portraying,” O’Connell says of his beloved Cook. And so laying him down — which the show did first in 2010, before bringing him back for a last, dark one-off flourish this year — was an important part of the maturation process. “It was great to introduce my life experience via Cook, but there has to be a cutoff at some point. Now I got a good job and a steady career, man. I have a good reason for not wanting to be a little shit anymore. And it’s not like Cook ended up too well — selling drugs in Manchester and murdering dudes.”

After Skins, the plan was simple: stay diligent, rise fast. “I hadn’t gained admittance into America at that point,” O’Connell says. “It was more of a beastly entry to the whole industry — I had no familiarity.” The show had offered him “recognition, but not the finances to support privacy. It was low budget, man. We only got paid fuck all for it. I had to save money and go on tubes and maybe get mobbed in situations.” Meanwhile, he figured, “If I worked hard enough domestically, then eventually opportunities would arise in the States. And that’s where a lot of the fortune is, man. You can achieve some really fookin’ monumental work.”

Unbroken might indeed be that. The remarkable true story of the now 97-year-old Louis Zamperini — who competed in the 1936 Olympics, crash-landed as a WWII bombardier, survived 47 days at sea, and then was made a POW for two years by the Japanese — has been bouncing around Hollywood for 56 years, with everyone from Tony Curtis to Nicolas Cage to Ashton Kutcher at one point attached to star. Now, it’s finally coming to theaters, with the attached glamour of Jolie and a naturally, sellably epic sweep.

As for those rumored tentpole roles? He did indeed audition for Star Wars: Episode VII, but hasn’t heard anything since; with The Fantastic Four, the reported screen test never even happened. “It’s always gonna be weird when it’s just fabricated, for a column,” he says. “But it can just amuse me. Provided they’re not attaching me to some bullshit that’s embarrassing. I’ve got to be a bit mindless about it.”

It’s a weird time, having his head down and plowing forward, while simultaneously acknowledging that much bigger things might be around the corner. He says he’s elated to be a full-time working actor now. He says his friends can’t even quite believe he’s running around New York: “It’s such an infamous city, so the thought of their old mucker embarking on it as some kind of professional actor is hilarious to them.” And he thinks about the fruits of what may yet come soon enough: He’d like to be more charitable, especially with the theater group he came up through; also, hopefully, if he gets busy enough, he’ll be able to hire his good pal from back home as an assistant, and to help him “see the world” too. “This time last year, I knew I had good work up, but I didn’t have a [guarantee]. Now I can relax a bit. I’ve got a bit of a foot in the door.”

Unbroken’s the big swing. Its marketing push will most likely, for better or for worse, be ubiquitous. But O’Connell’s lining up some other very proper-seeming bullets, too, including Joe Cornish’s British spy movie Section 6, Belfast-set Troubles thriller ‘71, and the Christoph Waltz–starring 17th century Dutch romance Tulip Fever. Meanwhile, he’ll keep carefully cultivating. “I’m not a yes-man,” he says. “I’m not gonna compromise my career for the sake of a fortuitous contract. I’ve had to say no to some very tempting offers, man. Certain things that could have probably made me a millionaire by now. But it wasn’t really suggesting a longevity afterwards.”

Earlier, I’d praised his fighting style: O’Connell’s characters are prone to a bit of the hand-to-hand, and I’d asked how he managed such honest-seeming punch-ups. After I left him, I realized his answer seemed more roundly appropriate: “It’s gotta be scrappy. It’s gotta be bits of clothing going everywhere. It’s always my intention to keep shit real.”