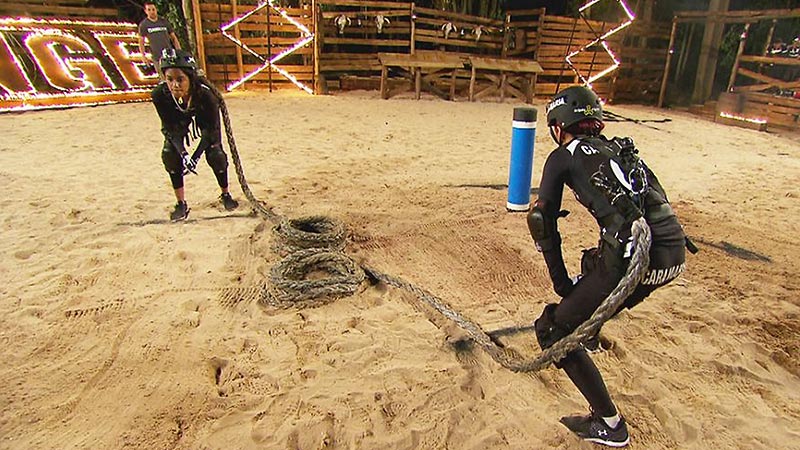 The Challenge hasn’t actually changed. Sure, TJ no longer wears a hat, but the contestants still wear Under Armour jerseys featuring their names, still get slammered, still argue, still hook up, and still carry around bobbleheads of their own visages. So I had a long talk with myself as a reminder that Frank isn’t going to Alcopsychoholic every week, Nia isn’t going to brandish a hair dryer as a weapon every week, and CT isn’t going to have cannibal coitus every week … and that’s OK. Sometimes, we need to be thankful for what we do have, and we have Frank, Nia, Leroy, Cohutta, Camila, Bananas, and the rest of the gang in our living rooms for an hour every week. That’s enough. Cannibal coitus is cool and everything, but we at GRTFL headquarters can’t take this show for granted. This week, Jasmine dressed up like a schoolgirl who practically took dollar bills out of Isaac’s mouth with her butt cheeks, and here I am complaining about it. No more.

All that said, this episode was kind of boring. But whatever. Survivor and The Challenge After Show more than made up for it.

Hurricane Nia and Roy Hibbert had the exact same journey. They spent last season getting gassed as everyone told them they were game-changing, rule-bending, intimidating forces, and then they just straight-up didn’t show this spring. Hurricane Nia getting picked last for this week’s team challenge is the equivalent of Luis Scola playing over Hibbert in the fourth quarter. It doesn’t make sense on paper, but as you dig deeper, you realize there are legit reasons for it. It doesn’t make sense that Hurricane Nia has gone from being someone who forces fellatio on others, brandishes a hair dryer as a weapon, writes a book about coitusing athletes, and contracts a real-life hit on her Real World: Portland roommate to being a Challenge wallflower, but it’s happened. I thought she might be rope-a-doping us, but Nia got bounced this week by a game Cara Maria, so there was no roping and no doping.

Oh, wait, there was some roping. Nia and Cara Maria were attached via harness to opposite ends of the same rope, then had to try to pull the other person toward a bell to ring. It seemed like it would be an action-packed test of might, but it turned into a marathon test of will, heart, and badassness. One would think the hit-contracting, weapon-using, fellatio-forcing contestant would win the contest of badassness, but it turns out Hurricane Nia might be a little more Nia than Hurricane. After more than an hour of tugging and warring, Cara Maria eventually sent Nia home without her ever really being Hurricane-y.

On the aftershow, we learned that Nia was actually hospitalized following the competition because her harness had been too tight and caused her to lose movement in her right arm for a couple of days. She displayed her regained manual abilities on the aftershow, but she also displayed her lack of mathematical abilities after Jasmine accused her of wimping out: “You don’t go for 85 minutes and not wimp out. That is over an hour and a half.” No, Nia, it is not.

I take issue with Frank being sent home this week. He was sick for the first two “draws” and won them both. That means he’d been sick for at least two days, yet when everyone showed up for the next challenge, Teej was all: “We have a serious problem in the house. First things first, Frank, I have talked to The Challenge doctor and they said that you have a viral infection. He said you are very contagious, and I can’t have you in the house, man. I gotta let you go, I’m sorry.” Wait … WHAT? This is definitely the GRTFL Questionable Moment of the Week. I don’t even know where to start.

THERE’S A MAN WHO HAS THE TITLE OF “THE CHALLENGE DOCTOR?” Do you have to get a special certification to be “The Challenge Doctor?” Is there only one? Where was this “Challenge Doctor” when Nia couldn’t feel her arm? Where was this “Challenge Doctor” when LaToya seemingly got concussed, then put on a helmet for battle? If being contagious is a reason to be sent home, how are there still contestants on this show? Does anyone on this show NOT have a viral infection? How is Frank still contagious after four or five days? Why couldn’t they just quarantine him for a couple of days? If he’s so sick, how did he win two eliminations? Why didn’t he protest more? What the hell really happened? Why did this get me so fired up? Why do I care more about this injustice than Frank does?

My pod partner Juliet loves nothing more than a conspiracy theory. Can’t wait to talk to her about this one. Anyway, Frank, you always have a home in the Grantland studio, so come on by and hang, contagious or not.

Now, answer this. Did Tasha just:

A. REALLY enjoy the way Jeremiah’s hair blew in the wind?
B. Witness a violent male-on-female head butt?
C. Realize she didn’t arrange for someone to feed her cat?
D. See a UFO land just off camera?

The answer is none of the above. She just won a reward challenge, but those four guesses are all more reasonable explanations for her reaction.

When this week’s episode began with Nany pronouncing that Cohutta is her ideal husband, your first reaction as a viewer is, “Cohutta? Really?” And then you hear her say that he’s the best kisser she has ever kissed and it starts to make more sense, because she’s kissed every dude on the show. Then it starts to make even more sense when you hear Cohutta describe Nany: “Nany is by far the best-looking woman in the house, and she smells like honeysuckle blossoms.” Then when you see him effortlessly pull off these snakeskin boots … 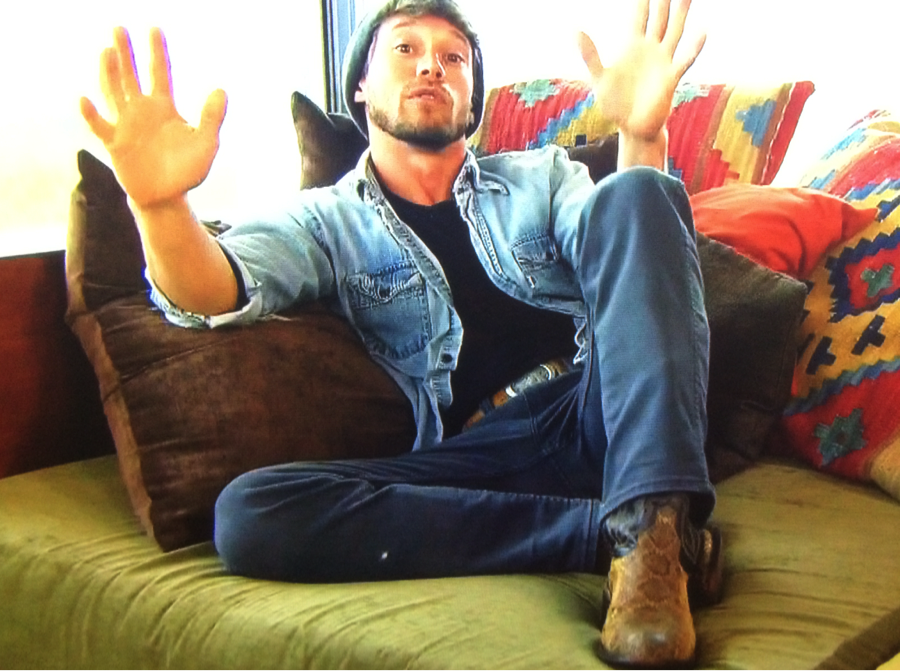 This week on Survivor, Tony built a “spy shack” to eavesdrop on his castmates, found a hidden Immunity Idol that can be used AFTER the votes are read, and still somehow didn’t shut the fuck up. That idol makes him powerful, his gameplay makes him easy to vote for at the final Tribal, and his gigantic tribal tattoo makes him look foolish. One might think he has a Miami Heat–like golden road to the finals paved in front of him, but once the tribe members try to vote him off and he plays the special idol, won’t they be forced to vote him out again? Seems like he’s going to have to avoid being targeted (which is hard because he talks so damn much), win a bunch of challenges (which is hard because the show varies the skill sets needed each episode), or become likable (which is hard because of the gigantic tribal tattoo) to win this game. It’s not impossible, but his road to the million isn’t as clear as it currently seems.

This exact same shot of this super-slow-motion dog chasing a ball has made damn near every episode this season: 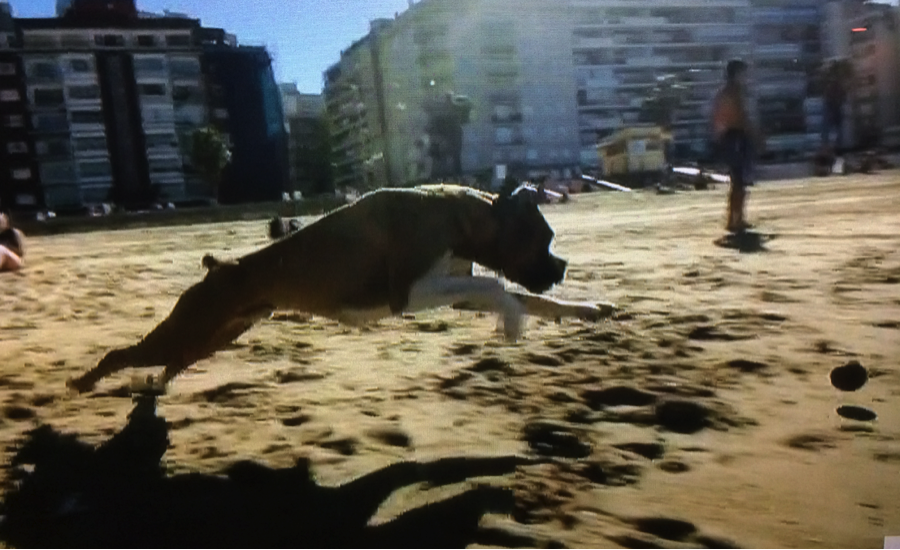 Shout-out to this Uruguayan beach dog, he has a good vibe.

Jeremiah made a HUGE confession this week on Survivor when he revealed that he’s a male model. He followed up this HUGE revelation with, “Just Google my name, Jeremiah Wood, and put ‘model’ afterward, and some stuff will come up.” OK, first off, no one gives a shit that you’re a male model. Second, if I have to put “model” after your name in Google, you can’t be THAT big of a model. Third, I don’t think anyone who watches Survivor knows what happened during the next five minutes, because we were all too busy putting “Jeremiah Wood model” into Google.

Woo is so chill that he fell out of a fucking papaya tree onto his back this week and barely noticed. In fact, I’m not sure there’s an earthly event that could occur that Woo would notice. Woo’s reactions are basically the opposite of this:

Enjoy your weekend, buy some snakeskin boots, watch some hoops, and listen to the Right Reasons podcast.