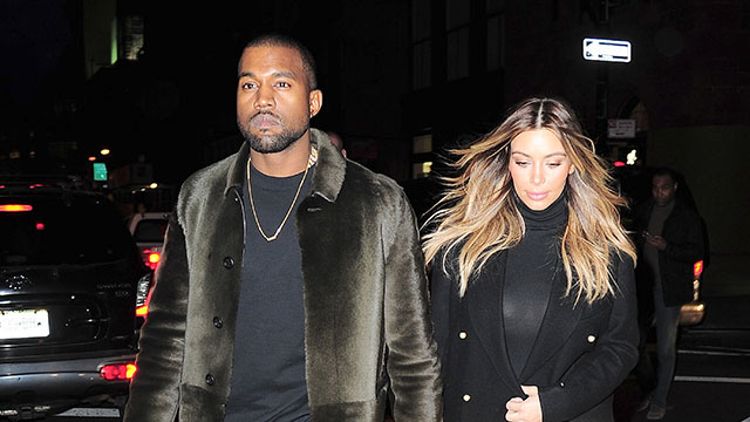 Kimye to Wed at Versailles: “Leave it to the self-proclaimed genius to have a gilded ace up his sleeve. Nothing less than France’s famed Palace of Versailles will do for his spring vows to Kardashian, 33.” This makes so much sense. “Kanye has never been married and wants a big one. It will be over-the-top crazy.” But leave the guillotines at home, please. “They are not working with a budget. He says this is his moment, marrying his ideal woman.” Can’t you already hear Kanye screaming “THIS WAS SUPPOSED TO BE MY SPECIAL DAY” when the wrong rare orchids show up for the table settings? There will also be “fighter jets” flying overhead, as promised by Kanye repeatedly. And fireworks too, of course. I mean they’ll still probably make better use of Versailles than Sofia Coppola did.

Does Megan Fox Watch Old 90210 Eps of Her Husband, Brian Austin Green? Duh. “I do sneak episodes of the show while Brian is at work. I’ll text him and say, ‘How could you cheat on Donna?! She loved you so much and saved herself for you!'” Seriously, David Silver. But also, you scored Megan Fox.

Lauren Conrad on Whitney Port: “She was like, ‘Oh my God, we’re both going to be old married ladies together!'” Happily ever after on Pinterest.

How Did Oprah Cope With Beloved Being a Box Office Bomb? “I had to put my face in a bowl of macaroni and cheese after that.” Mmm … mac and cheese.

Vince Vaughn on Fatherhood: “You have to realize that you’re kind of like a cat. You have to let them come to you. You can’t be like the overeager dad who’s always on top of them.” You’re like a big bear with claws and fangs!

Justin Bieber: While shopping in West Hollywood, Bieber “kept asking his two security guards about the house party he had thrown two nights before. He was like, ‘Was I cool, or was I messed up?’ And the guys were saying, ‘No man, you were cool.’ They kept reassuring him.” I mean, I would hope so, he pays them to.

Whoopi Goldberg Loves Elf: “When Will Ferrell yells of Santa, ‘I know him!’ it’s just a great Christmas groove.”

Misc/Etc: “I feel very ballerina” “LOVE, MARRIAGE AND A BABY CARRIAGE” “love juice” “Beyonce clicked her heels” “Spencer Pratt and Heidi Montag feted their fifth anniversary” “tried sausage” “I’ve always loved puppets” “shunned nun” “Nursing is addictive” “I really like to cook for them!” “New year, new wife?” “Being in a car makes them feel normal” “They love their wine” “TOO BUSY FOR LOVE” “It’s a weird underworld — bikers, meth, crazy!” “Me Sexy” “Lots of bells.”

LeAnn Rimes Pays Husband Eddie Cibrian to Have Sex With Her: While wife “LeAnn, 31, is constantly in the mood due to a ‘sexual awakening’ and desire to get pregnant, Eddie, 40, would rather plop himself in front of the TV and watch sports. Since the ‘Spitfire’ singer already pays for most of the couple’s household expenses, she decided to stop begging Eddie for quality time and start bribing him for it.” Yikes! “It’s almost like their foreplay.” Cibrian has “earned himself a $6,000 mountain bike, along with hefty wads of cash.” So it’s just like The Playboy Club?

Nicole Richie: “I made fun of adult twins today and then realized I am married to one.”

Brad Pitt & Angelina Jolie’s Worst Fight Ever: Pitt was spotted having drinks with a mystery brunette in Telluride. “It almost seemed like they were on a date.” They stayed at the bar until close, and then vanished. Star maintains that Brad has also “hooked up with his Killing Them Softly costar Bella Heathcote, who was only 23 at the time, as well as with one of the couple’s nannies.” They also remind us that Brad got with Angie while he was still committed to Jennifer Aniston. Angelina got wind of Brad’s indiscretion and confronted him. “She called him, crying, and accused him of cheating on her while she’s been working her butt off and taking care of their kids.” Brad promised it wasn’t true, but finally copped to having “made a mistake” in Colorado. Jolie “told him that she thinks he’s been unfaithful many times and said she’ll never trust him again.” She blocked his calls for a week, but “after a week of begging and pleading, Brad convinced Angelina to meet him in Hong Kong,” using the kids as his excuse. Things calmed down, but not much.

“Years ago, Brad and Angelina made a pact that they would work at separate times, so one of them would always be able to look after the children. But Brad went behind Angelina’s back and signed on to do Fury last April — months after she had already committed to direct Unbroken. Angelina was angry that Brad would betray their pact, especially since he’s spent the past two years working almost constantly, while she’s made only one film in that time.” Team Angie on this one. “Angie is still trying to prove herself as a director and has been extremely stressed out trying to do everything. They have nannies to help, but Angie thinks it’s important to be a hands-on mom. Despite all the demands of her film project, she’s been trying to give even more of herself to the kids to make up for Brad being away. Between working and the kids she rarely sleeps. She’s exhausted.” Aw, Acid Burn! The kids can tell something is up, which only further stresses out Angelina. Brad “tried to apologize and make up excuses, but Angie wouldn’t have it and issued an ultimatum: Get himself together and put more time and effort into their relationship, or lose her for good! This was the worst fight they’ve ever had.” Sack up, Brad.

Lindsay Lohan Stalking Her Ex: Lohan’s “addictive personality is still a work in progress.” She’s been flooding ex-fling Max George from boy band the Wanted “with calls and texts to hook up again at all hours of the night — which has forced him to block her phone number!” George “has been dating Sports Illustrated model Nina Agdal, 21, since September” and doesn’t want Lohan to muck it up. He is “trying to cut all ties with the Canyons star after giving her the wrong impression during their fleeting romance.” I mean, don’t mess with the Lohan (obviously). “Max had fun with Lindsay but made it clear they would never have a relationship.” Lohan does not take never for an answer, and “recently sent Max 15 racy pictures of herself in a desperate bid to get his attention.” Sad faces for everyone invoved! “He says she’s acting like an out-of-control stalker and felt like blocking her number was the only way to get rid of her.” But what did he say to her behind closed doors?

Misc/Etc: “You Can’t Sit With Us!” “she’ll blow $500 on a white-caviar facial or diamond exfoliation treatments” “that boyish face is totally gone” “serenaded by family friend Jimmy Buffet” “She’s a diva, and her bank balance is struggling to keep up” “His Royal Hotness” “his face is no longer his moneymaker” “Five-Hour Benergy?” “The pair enjoyed a stroll together on an autumn day” “she really does keep getting better with age” “tried on a pair of sauna pants” “Is this love or a business deal?” “WILL THEY EVER GET MARRIED?” “a face-lift (about $35,000); breast implants ($15,000)”

Kris Jenner’s Rules for Her Daughters’ Suitors: “He must bank a minimum of six figures and look good in photos with her daughters.” He must also agree to be taped at all times.

Tina Fey: Tina is the voice of two characters in the latest version of classic pinball machine Medieval Madness. NERDS! This is my nerd dream too, actually. So cool.

Misc/Etc: “BODS MADE TO ORDER!” “It’s self-deception at its very worst” “Some of her pals think she’s had a breast lift and lip augmentation” “puts her toned abs on display” “practicing his intense Batman scowl” “At 41, Carmen can still rock this sexy dominatrix look” “MOLLY’S FLOWER POWER” “No, I’m always uncomfortable when people sexualize their children” “He makes me feel good about myself and he does a lot of baking” “Bankruptcy is not the end of the road for Aaron Carter” “THEY’VE GOT ISLANDS ALREADY” “worrying about all the humiliating things that might happen over the holidays” “push a drink in guests’ hands as they arrive”

Joe Jonas Says Miley Cyrus & Demi Lovato Got Him to Smoke Weed: “They kept saying, ‘Try it! Try it!’ so I gave it a shot.” LOLOL.

Kendall Jenner & Harry Styles: “Most parents would’ve gone ballistic. But when Kris Jenner heard that her 18-year-old daughter, Kendall, had spent the night with notorious womanizer Harry Styles, she had only one thought: ka-ching!” Now that Kris has lost Kim to Kanye, she has to work on her backup money machines. “Kris is behind every move Kendall and Kylie make. They’re her new cash cows.”

Jon Hamm: “I’m getting older. I’m morphing into that guy who stands on his lawn and shouts, ‘Get off my lawn!’ All I can say is that I don’t get Miley Cyrus, I don’t get Katy Perry.” Sounds pretty Don Draper at the Stones concert to me. Another Hamm gem: “Ask any 16-year-old girl: She’ll say I remind her of her dad. I am a 42-year-old guy in a world in which Ryan Gosling exists.” Fuck Gosling though, HAMM 4 LIFE!

Kanye: “I don’t give a fuck about looking cool or being cool.” Uh, OK.

Misc/Etc: “Everyone Feels Old Sometimes” “shocking rules for her unborn children” “calf hair adds rich texture” “may shed her clothes onstage” “You have to use tongues, even if you’re not a lesbian” “headpiece and furry coat” “takes the schoolgirl theme too far” “She kissed a girl — but did she like it?” “Mommy, why are you showing your boobs?” “Always great to see my li’l Kitty cat!” “no hunky actors were harmed in the making of this show” “this is a fringin’ disaster” “leaving the club at 4 a.m. with Drake”

Dead Man's Curve: The Scene at Paul Walker's Crash Site and the Way We Mourn Now

My Anti-est Antihero of the Year: Nashville's Juliette Barnes