My Anti-est Antihero of the Year: Nashville’s Juliette Barnes 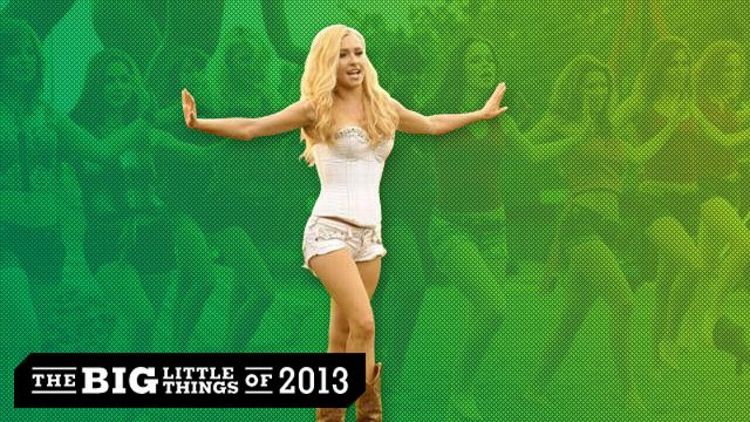 Is Juliette Barnes an antihero? We all know that for a modern TV show to earn the “golden age” designation, and therefore garner grandiose comparisons to the most operatic works of Shakespeare and De Palma, it must center on an ethically questionable yet stubbornly sympathetic protagonist. And on Nashville, the conniving counterpart to the Artist Formerly Known as Tami Taylor engages in all sorts of despicable behavior. We’ll do a thorough inventory in a second, but for now let’s just say she has interrogated morals while eliciting cheers. The final result doesn’t compute, though. Nashville is not golden. Barnes has been laudably bad, but she doesn’t get that Walter White/Donald Draper dap. What gives?

Is there nothing to be learned about the human condition from the machinations of a Machiavellian schemer fighting to stay atop the Edgehill Records power structure?

I wonder if our antihero expectations are presently perched at an impossibly high benchmark for cretinous behavior. Thirty-five years ago, the most popular show in America was Dallas, and all J.R. Ewing had to do to make people love-hate him was dispatch his dopey brother Bobby to Austin on some trumped-up business while he hatched a plan to drill for oil on Miss Ellie’s beloved Southfork. When he subsequently cackled over his misdeeds while ingesting a tumbler of bourbon, viewers believed they were watching the devil himself.

Now, TV characters have to kill an entire 747 full of people or have sex in front of their own daughters for us to feel anything. And this makes Juliette Barnes seem relatively tame. Her crimes are strictly of the “of passion” variety, and they always end up hurting her most. For instance, when she deflowered a Tebow-esque NFL quarterback, married him, and then left him after a few days … it was because she knew his mama would never accept her. Or when she totally did her drug-addict mother’s sober companion … it was only because she wanted someone to take care of her. And when she sexed up the scion of a radio broadcasting empire, and then recoiled when the guy’s wife wanted a three-way … it stemmed from her feelings of worthlessness as an ex–trailer park kid attempting to mix with rich people.

(Other Barnes transgressions: shoplifting, exploiting the near-death of a professional rival to goose her own record sales, engaging in a successful cover-up of a sex tape, and storming off a Good Morning America interview. All these misdemeanors are excusable save one — smiting Robin Roberts is not so easily forgiven.)

The obvious answer to the question “Why isn’t Juliette Barnes on TV’s antihero A-team?” is “Nashville is not as good as Mad Men and Breaking Bad.” I won’t argue with that, though when Nashville was at its best this year — which admittedly wasn’t as often as it should’ve been — it was more fun to watch than any other TV drama, prestige or non-prestige division. The no. 1 reason was Juliette (Ms. Barnes, if you’re a handsy radio programmer), who started out as a cheap Taylor Swift knockoff and evolved (thanks to Hayden Panettiere’s great, always game performance) into a giddily trashy and sneakily insightful portrayal of steely-eyed ambition in sky-high heels.

When Nashville premiered in 2012, the main attraction was Connie Britton as matriarchal country queen Rayna Jaymes. Panettiere was initially positioned as Britton’s antagonist — a sexier version of Joe McCoy from Friday Night Lights. It was clear the show was setting up a (false) dichotomy between an “authentic” veteran and her crasser, dumber upstart — a rigged game that would always end in Britton’s favor. But that changed this year. While Britton remains Nashville’s source of warmth and wondrously lustrous follicles, the show now undoubtedly belongs to Panettiere — she typically gets handed the funniest lines and most ludicrous subplots. (Shout-out to Rayna Jaymes’s ex-husband and Nashville mayor Teddy Conrad’s new wife, Peggy Kenter, played by Kimberly Williams-Paisley, the show’s new VP of insanity, who has lately been faking miscarriages and flashing crazy eyes on the regular.)

The reason Juliette Barnes has taken center stage on Nashville is simple: She fucks up more often, and more spectacularly, and this makes her a lot more interesting (and relatable) than the preternaturally grounded Rayna. A lot of Nashville fans hate that it has become a big-hatted version of Dynasty, but I like that this show is the rare 21st-century serialized drama that isn’t apologetic about embracing full-on melodrama. Focusing on Juliette has made this shift in tone feel natural, if not inevitable — when she feels, she can’t help but feel big, whether it’s over [SPOILER ALERT] the death of her mother or the disappearance of her precious bean dip. But she is not a caricature. She’s as multidimensional as any character on TV right now. Like Don Draper, Juliette Barnes is the product of self-invention, a glamorous façade hiding a wounded, lonely soul fueled by the bottomless resentment that comes from being raised in poverty by deadbeat parents. Like Walter White, she has built an empire by exploiting those who underestimate her ruthlessness.

The pleasures (and meaning) of Nashville aren’t all that different from its more critically lauded brethren. It’s a show in which highly skilled professionals navigate an exotic (for the average person) career path. It asks The Same Big Question that consumes all contemporary showrunners: What is the psychic toll of making ends meet in America by any means necessary? Juliette Barnes doesn’t cook meth or whip up advertising B.S. for corporate clients. What she sells are pieces of her soul, parceled out in catchy three-minute singles, to an audience that’s constantly on the verge of disappearing. What makes Juliette Barnes likable is that she’s good at her job. She’s heroic because her armor will not be penetrated. Is Juliette Barnes an antihero? As far as I’m concerned, she’s the anti-est.

Kim and Kanye's Versailles Wedding ... and Other Totally Reasonable Plans From This Week's Tabloids

Mob City: The Suits Are Nice, But We've Seen Them All Before