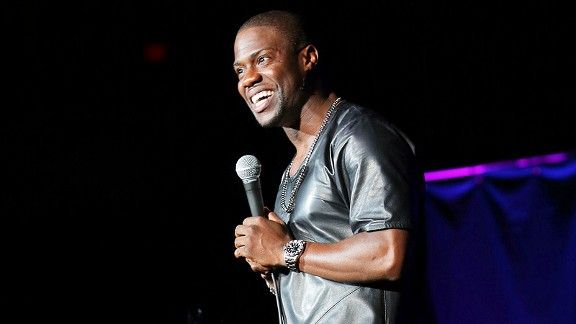 GQ’s comedy issue isn’t just a way to see Louis C.K. in a skinny tie and Julia Louis-Dreyfus nailing a clown. Kevin Hart’s also in there, along with a nice, long profile showing us how superhumanly ambitious he is. The 34-year-old Hart appears to be working on various projects every spare minute he’s got, whether being shuttled around L.A. or sitting in a green room before a talk show visit. (He’s so committed to multitasking — er, maximizing — that he’ll drop trou in front of a reporter rather than going to another room to get changed. Time is money, man!) Along the way, Hart says his success in stand-up and now film has “put me in a position to own, to do, to get.”

The next item on Hart’s ownership list is what GQ perceives as “kind of a black Funny or Die — where his fans can go to laugh, sure, but also to buy concert tickets, games, apps, music.” Hart says his production company, Hartbeat, will soon “have the same capability of the Netflixes and the Hulus.” Before becoming known as an original content powerhouse, Will Ferrell and Adam McKay’s Funny or Die was a reliable destination for the choicest comedy in a vast, weird sea of Internet junk. Part of Hart’s site will serve a similar function. “I’ve typed in the strangest shit in the world on YouTube, and they got it,” Hart says. “‘Trash in ass’ is a guy shitting out trash. What the hell?” (Couldn’t verify that, but I’ll trust you, Kev.)

The site has the placeholder name of ThatShit.com, even if it’s not registered yet. That could represent anything from “that shit cray” to “did you see that shit??” to “it doesn’t really matter because that won’t end up being the actual name.” Hart says his rapper character Chocolate Drop — whom you can see battling T-Pain on Funny or Die — might premiere a video, “Bitch, That Car Is Mine,” on ThatShit. Whatever happens, within a year or three, “I promise you, I will have something on the Internet that is game-changing. I can’t lose.” Is it any wonder Hart’s name-checking Jay “I — Will — Not — Lose — Ever — Fucker” Z as a primary influence in moguldom?