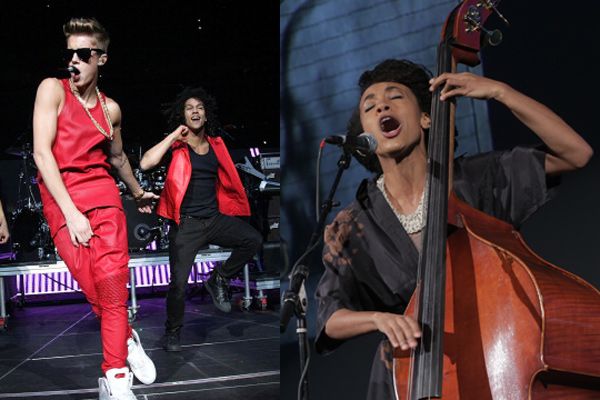 During the 2011 Grammys, the then-even-more-fresh-faced Justin Bieber was cruelly denied the glory of the Best New Artist statuette by … Ezperanza Spalding?! The Beliebers, not a demographic associated in particular with a working knowledge of contemporary jazz vocalists, freaked out, and ended up peppering Spalding’s Wikipedia page with such gems as “WHO THE HECK ARE YOU ANYWAY?” and “GO DIE IN A HOLE.” And as unexpected and painful as it was to see Justin mercilessly iced out, it was, it seemed at the time, a mere hiccup in the young man’s all-seeing/all-knowing/all-crushing death march to global domination. Sooner rather than later, we all knew, Justin Bieber would have an overflowing treasure chest of Grammys. He’d have so many Grammys he’d have to buy new mansions in order to get new bathrooms to put the Grammys in. He’d have so many Grammys he could invite Lil Twist and Carly Rae Jepsen and Drake and Jaden Smith over and they could all play flip cup but instead of with Solo cups it’d be with Grammys. He’d have so many Grammys he could build a life-size C-3PO–esque Esperanza Spalding voodoo doll constructed entirely out of the gold of melted-down Grammys.

Except wait. The 2012 Grammy nominations came out today, and not a single one was given to JB’s all-grown-up album Believe. Hmm.

first…congrats to @carlyraejepsen . thought u deserved a best new artist nom, but proud Call Me Maybe got u 2 noms. so proud of u … second….this time there wont be any wise words, no excuses, I just plain DISAGREE. The kid deserved it. Grammy board u blew it on this one … the hardest thing to do is transition, keep the train moving. the kid delivered. Huge succesful album, sold out tour, and won people over… this time he deserved to be recognized and I dont really have any kind nice positive things to say about a decision i dont agree with … so to all those nominated…you do deserve it. You worked hard and u earned it. Just feel like so did JB … To his fans…looks like we get to stay the underdog a little longer. #BRINGIT … I got a lot more I can say but for now….Im gonna leave it at that. Congrats to all those who got nominated including our own CRJ … life is long, with many ups and downs, but we get to keep going, everyday brings a new opportunity. NOTHING GREAT EVER CAME EASY.