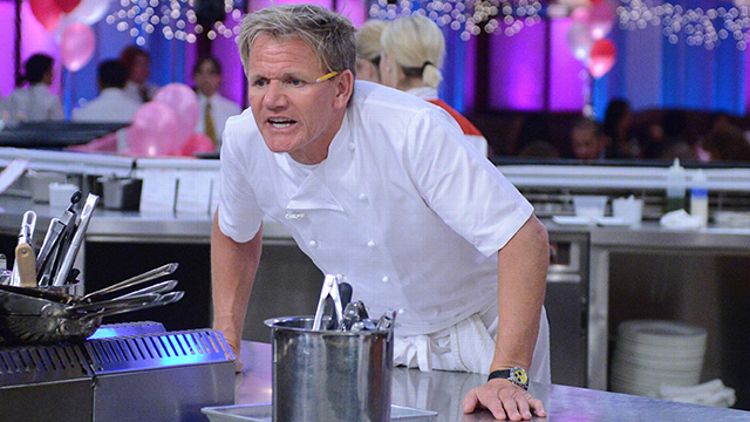 Gordon Ramsay’s primary trait is that he is scary. He projects Simon Cowell–esque honesty, but it is directed at its targets in the form of spiny fireballs. He walks among them, unchained from a desk. His trademark immunity to sensitivity — he’s called Jamie Oliver fat, a Kitchen Nightmares diner an “old bag,” and once reportedly referred to Marcus Samuelsson as a “black bastard” — isn’t even what’s so intimidating. What is intimidating about Ramsay is that he’s unpredictable. He tends to alternate between getting right up in a person’s face to whisper menacingly and dogging people by shouting repeatedly at them while stalking them through the kitchen; he’s like a hybrid of someone’s terrifying, strict father and the guy you never want to be around at a crowded bar because you’re afraid your whole crew is going to get your teeth knocked out (yet you find yourself unable to resist his next offer to get a beer, because he’s fun until he’s tanked). A large portion of Ramsay’s career seems to be dedicated to waiting for someone to finally punch him in the face on camera. (They’ve tried.)

Ramsay’s infamous personality is probably explained in his autobiography Humble Pie (oh, Gordon) — a violent father, intense and perfectionist mentors — but its origins aren’t really important. Every angry person has a long story to explain how they got to be that way, but what’s relevant is whether they use that powerful rage to their advantage or let it consume them like a broiler trained on a paper-thin sheet of prosciutto. Celebrity chefs, and many non-celebrity chefs, tend to display a certain level of arrogance that lends itself well to non-scripted programming, and Ramsay is king of the genre with more than 15 years of experience schooling wannabe chefs on the fine points of various incarnations of beef Wellington while simultaneously calling them “chunky monkey[s].” I prefer the Ramsay we see on MasterChef (the fourth season premiered last night), on which he presents a slightly more restrained, dinner-jackety version of himself beside fellow judges Graham Elliot and Joe Bastianich (whose withering glances are just as mean as anything that’s come out of Ramsay’s mouth). Hell’s Kitchen is straight-up pie-in-the-face anger farce, and I’ve found it impossible to stick with, especially after the show stiffed 2010 winner Holli Ugalde out of a job. And I do not think I will ever feel like watching the upcoming Junior MasterChef, because I don’t want to see a 9-year-old cry after being told to fuck off.

Ramsay’s restaurant makeover show, Kitchen Nightmares, however, is a mysteriously intriguing program. The most striking thing about it is that it’s hard to figure out why anyone would want to go on a show that forever stigmatizes his or her business as a “nightmare.” Is it desperation? Naïveté? Is there a good per diem? I am almost sure there isn’t. Two poor souls whose lives intersected with Ramsay’s television empire have committed suicide (Joseph Cerniglia from Kitchen Nightmares and Rachel Brown, who placed seventh in the second season of Hell’s Kitchen), but even those who escape alive don’t seem to fare very well according to this handy chart, which claims that two-thirds of the restaurants foreclosed or sold after the intervention. Once you’ve seen a walk-in freezer stuffed with chicken cutlets, old and oozing, languishing in an uncovered aluminum tray, you can’t unsee it. The glamour shots of Ramsay’s replacement menus aren’t enough to instill confidence in prospective patrons because all they really do is bolster Ramsay’s own reputation as a quality-control dictator. Once he leaves, why should we trust the old management with our dinners (and, as Ramsay likes to remind us with appalled gravity, our lives)? These are the people who let 10 years of dust accumulate on the backs of dining-room booths and who stored gallons of gravy in what appeared to be filthy paint buckets. It makes sense that these defamed individuals would retaliate against Ramsay, and they have: He won a lawsuit against the London Evening Standard for publishing claims that he had faked the state of one of the restaurants on the British version of Kitchen Nightmares, and another case was dismissed and sent into arbitration per a contract clause.

It may be that same clause, which carries a $100,000 fine for speaking up against the show, that accounts for Amy’s Baking Company — the most notable train wreck in the Kitchen Nightmares canon — canceling its press conference this week. Amy’s was the first business that was just too chock full o’ nuts for Ramsay to stick with, forcing him to quit. Amy Bouzaglo, the chef, was stubborn and eager in a way that might have appealed to Ramsay if not for her inability to take his advice and her Clockwork Orange crazy eyes. Amy’s husband and co-owner, Samy, is now facing deportation for failing to disclose that he’s been permanently disinvited to France and Germany and had been previously charged with drug-related crimes and extortion. Supposedly, Kitchen Nightmares didn’t have anything to do with his deportation, but I can’t imagine that it’s helping his cause. If not for former waitress Katy Cipriano’s Reddit testimony, this would have been exactly the kind of episode that seemed to have a skilled editor as its author, but the information that has been released so far points to it being a bizarre example of cinema verité.

Unlike the U.K. Kitchen Nightmares, the U.S. version focuses more on personal and emotional dramas than it does spongy steaks and miscommunications on the line, and while this can grow tiresome (narcissistically speaking, being horrified by food that you could hypothetically experience for yourself, assuming you were in a risk-taking mood, is more interesting than watching a couple bicker while waving their unpaid bills around in a fluorescent-lit office), it occasionally illuminates not just the exhausting business of restaurant ownership but the types of people attracted by this often thankless, high-risk job. The egotistical ones tend to fare better than the people who have lost their will to fry, which adds up to an interesting portrait of the chef as an archetype. Perhaps that’s why they appear on Kitchen Nightmares in the first place — because they truly believe that everyone in the world is wrong, and that they are right.

Kitchen Nightmares is a perversion of food porn. It fills its audience with complete revulsion: It’s very difficult to dine out for weeks after viewing, because the show renders you a paranoid, un-hungry shell of a person who wants to poke everything 100 times with your fork before pushing it away. The prep area at Amy’s Baking Company was immaculate, and despite Ramsay’s gripes about the food, he’s seen much worse (like the times he has excused himself to vomit). The problem with Amy’s was Amy and Samy, but of course they preferred to believe that the blame lay with the online haters who periodically basted their reputations with a pungently sour sauce. This is exactly how Ramsay himself responds to criticism (see: the aforementioned “old bag”), and a trait that generally seems to distinguish artists, culinary or otherwise, from people-pleasing captains of food factories. The Bouzaglos just made the mistake of trying to ascend the sadomasochistic chef power ladder too quickly.

In Ramsay’s world, you are thrown to the floor and trampled repeatedly so that you can build yourself back up in his image. Then you develop the toughness necessary to succeed in an industry so saturated with yelling and Yelp slams that you have the hunger to reduce people to quivering masses of fear, as others have done to you. There is so much wrong with this model, and yet despite the Kitchen Nightmares restaurant statistics, it always appears to work. On the one hand, Ramsay is the villain, but on the other there’s something almost guru-like in how much he seems to inspire the people he works with. He would make the best life coach, and he would also make the worst life coach. He’s a giant magnet that draws your Jungian shadow out of you, presenting its tender fillets on a bed of asparagus so that you can inspect it for hours. There is a strange but undeniable appeal in it. Maybe that’s why Kitchen Nightmares marches on, despite the doom it leaves in its wake — the id prevails over the superego, and the id needs to know why people don’t dig the crème brûlée even though the superego insists it doesn’t care. The Bouzaglos were anomalies. The more Ramsay tried to chip away at their exteriors to reveal their creamy centers, the more his usually efficient tool bent backward on its iron handle. It revealed something thought-provoking about the motivation behind appearing on a reality show with a very slim chance of a good outcome, a sadomasochistic impulse that left us with no explanation as to how it could have possibly happened in the first place.

The Bachelor sells love, Survivor hawks adventure, Teen Mom offers Us Weekly covers and a substantial salary (more if you’re up for backdoor action). What does Kitchen Nightmares promise other than broadcasting your own shame and a fresh coat of paint on your dining room walls and maybe a new oven if you’re really lucky? Perhaps being seen through the eyes of Ramsay is enough, like submitting yourself for cosmic evaluation: the desire to be seen, to have someone quantify and explain your ugliest aspects, is strong enough to overpower reason. Watching the Bouzaglos implode during and after the episode aired has been like sitting down for a psychological thriller, trying to locate the self-effacing hero/masochist/truth-seeker who picked up the phone and pitched his or her business to the show. That portion of a person has remained invisible, but it must exist somewhere or we never would have made Amy’s acquaintance. Ramsay kept insisting that Amy “look at [her] eyes,” but of course she couldn’t do that. She was looking at him, not a mirror, though I guess the confusion is understandable.

Video: Morgan Freeman Takes a Nap During a Boring Junket Interview, As Is His Right