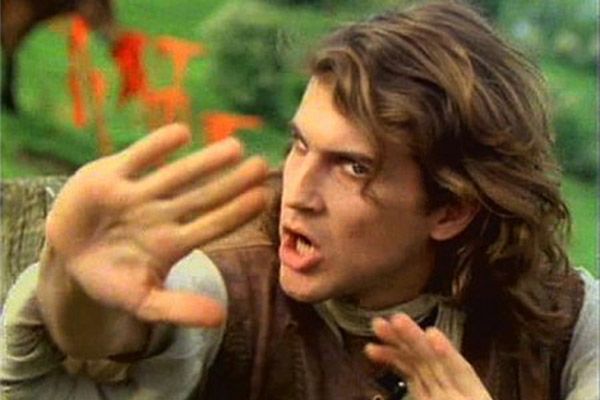 Welcome back to our series Rembert Explains the ’80s. Every so often, we’ll e-mail 25-year-old Rembert Browne a video from the 1980s that he hasn’t seen. Rembert will write down his thoughts as he’s watching the video, then we’ll post those thoughts here. This week’s installment was suggested by EVERYONE: “The Safety Dance” (long version) by Men Without Hats. If you have an idea for a future episode of Rembert Explains the ’80s, e-mail us at hollywood@grantland.com.

[Note: This song is everything to me. Just know that.]

0:02 Look at that luxurious grass. I wonder where they’re headed?

0:08 One of these little fellers is a garden gnome, I believe. They’re definitely headed somewhere filled with wonderment.

0:09 I’m hoping this video somehow sheds some light on the name “Men Without Hats.” I’ve long wondered what that meant. I could easily find out, but have chosen to just let the answer come my way organically. Maybe today is that day. Maybe not.

0:14 This song is incredible, just as a reminder.

0:15 Garden gnome has found a lady to dance with in this village they’ve stumbled upon.

She might be a keeper, garden gnome. Don’t mess this up.

0:31 A little curious about the dog and the puppet show and whether the man with the hair is, in fact, one of the Men Without Hats. Assuming all of these questions will be answered shortly.

This video is exactly as I dreamed.

Is this song about standing up for your right to dance uniquely? Please say this video is all about civil rights. PLEASE.

0:38 Every time I’ve told an authority figure that I was going to continue to dance as I wanted to, I’ve made this exact face.

This Man Without Hat and I are kindred spirits.

I may have incepted the premise for this video in the director’s brain 30 years ago.

0:44 What’s beef? “‘Cause your friends don’t dance, and if they don’t dance, well, they’re no friends of mine.” Straight ETHER. I wish I was brave enough to say something as rude and matter-of-fact.

0:45 I take that back. I have said something like this before, publicly, but instead of “dance” it’s “own jorts.”

0:50 So our Man Without Hat is saying all of this while yelling out at someone off-screen in the distance, all while his garden gnome jester companion is playing a ukulele.

0:58 There’s stuff going on, but all I can think about is the upcoming line “everybody look at your hands.” It’s one of music’s greatest lyrics. If everyone looks at their hands in the video during this line, I might faint. This is the moment I’ve been waiting for my whole life.

We’re back here again. Is this video looping? Am I being hazed and/or Punk’d and/or Safety Dance Roll’d?

Just because you repeat a verse twice doesn’t mean you have to travel in a circle. You can make forward progress, Hatless Man. I promise.

1:44 I can’t believe this garden gnome is dancing with this white girl again.

1:52 This girl is insane. Scrap everything I said about her being a keeper, garden gnome.

Also, thanks, Men Without Hats, for letting me see her do this exact crazy move for a second time.

1:55 I thought it was “MEN” as in the plural of “MAN.” Where are the rest of the hatless dudes? Starting to grow tired of this guy:

Great head of hair, though. I wouldn’t cover it up, either.

2:03 “And I can act like an imbecile” is a fantastic line. Especially when you pronounce it “imbuseal.” Just great.

Was definitely worth the wait. Just look at those hands. And then look at your own hands, because that’s what he said to do.

Know that this is a top-five move. If you’ve never run around a college campus doing the arms-focused Safety Dance while skipping around, then, to put it plainly, you’re no friend of mine.

2:37 One thing to note about this dance, in case you want to get involved: It’s not a slow, fluid “S” that you’re making with your arms. Right on the beat, it’s a quick, almost violent snap of the arms. Just know that. Wouldn’t want you out in the streets embarrassing yourself.

They’re doing a THIRD lap through this village. Are they about to attack? Is this a P.E. class? What is going on?

They’re just throwing the copy-and-paste function in our faces.

2:58 WILL SOMEONE PLEASE GIVE THIS DOG SOME ATTENTION?

What’s next? Village march? High grass scene? Maypole? (It better not be the maypole, or I’ll flip.)

3:17 Yep. There’s the synth. And yet another village march. They’re not even pretending like they shot this multiple times anymore. I’ve seen my hatless friend turned archenemy flip his hair the same way four times now.

3:34 Even though this cyclical video is beginning to hypnotizing me, subliminally giving very detailed instructions on how to carry out evil throughout the world, I can’t be mad, because the song is still so good.

3:56 When he did “everybody look at your hands” a second time, he didn’t look at his hands. So confused. I always thought this song was a buildup to that very lyric. Why not take one second out of your silly, copy-and-pasted grass travels to just look at your hands and give the people what they want? Is that really too much to ask?

4:03 I’ve decided this video is what happens when acid hits the streets of the Renaissance Fair. That’s the only thing that can explain all this hand staring, whimsical dancing, and constant feeling of déjà vu. Oh, and the garden gnome.

4:28 With all of my griping aside, I’m kind of sad that this video is coming to its drug-riddled conclusion. There is no ignoring the fact that they’re having the greatest time of their lives. This party looks incredible.

4:29 They flashed through all of the repeated stills in about half a second, just to remind us of how they played us. Nice touch, jerks.