Junot Diaz Is a Genius, Says the MacArthur Foundation 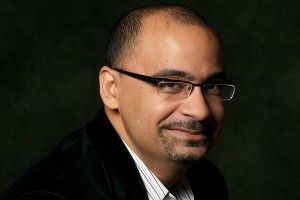 Early this morning, at exactly 12:01 a.m., the MacArthur Foundation officially announced its 2012 Fellows — 23 men and women who’ve just been handed what pretty much everyone refers to as “genius grants.” There’s no way to apply for a MacArthur, and you’re not informed that you’re in contention for the prize; instead, you just get a phone call once you win, letting you know you’re being handed $500,000, doled out in five installments over five years, to do whatever the hell you want with it. The idea is to spur the work of those doing big important things, but MacArthur Fellows are not required to explain how exactly they use the money. Pretty sick deal, right?

The highest-profile name is Junot Díaz, whose latest collection This Is How You Lose Her was just released to mostly rapturous reviews. When I interviewed Diaz earlier this year, he spoke about his struggles with his next big project, a sci-fi epic/romance called Monstro: “To face the fucking themes that I have put down on the plan don’t require genius — they require me to be less of a fuckin’ wuss, yo … I wanna fucking talk about an invasion, and I wanna talk about rape, and to be able to say anything useful about that, you’ve gotta think about shit that you don’t wanna think about. Every time I try to enter it, I get fucking scared.” Meaning, the MacArthur won’t make writing Monstro any easier. But it should at least grant him some more free time in which to work on it.

Speaking to the AP about the honor, Diaz responded in typically considered fashion: “It left me thinking about my childhood … It would never have dawned on me to think such a thing was possible for me … struggling with poverty, struggling with English. … I came from a community that was about as hard-working as you can get and yet no one saw or recognized in any way our contributions or our genius. … I have to wonder, but for circumstances, how many other kids that I came up with are more worthy of this fellowship than me?”

Elsewhere this year, there’s 31-year-old mandolinist Chris Thile, who proved himself to be a man of our generation when he screened the call from the MacArthur people. “Thile ignored the incessant phone calls from the foundation at first, thinking they were election-year robocalls,” the AP reports. “Then he received an ominous message: ‘Don’t tell anyone about this call.’ His tour manager searched for the number online and told him, ‘It appears to be from something called the MacArthur Foundation.'”

The rest of this year’s culture winners include, as reported by the New York Times:

Congratulations to you all! And if any of you are now looking for creative ways to ruthlessly squander your newfound riches, e-mail me, I have a ton of ideas.