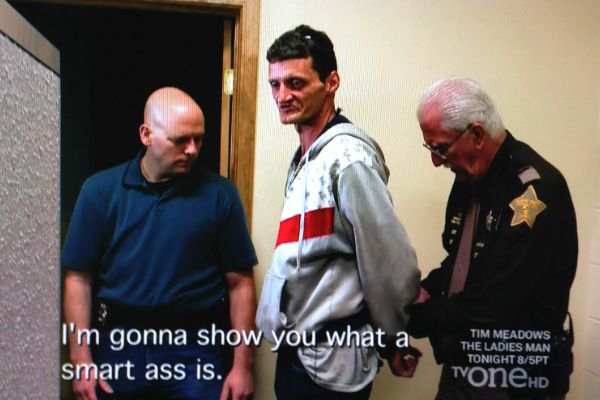 Who Is This Now? Charles.

Why Are We Watching Him? He’s hoarded up both his home and his painting studio to such a degree that neither is functional anymore.

How Did He Get Here? After his wife, Ginger, left him, he started drinking and collecting guns. It’s not a great combination.

What’s the Grossest Thing We See? I absolutely grant that art is in the eye of the beholder and that even though Charles is an off-putting old hermit, there’s nothing wrong with his favorite subject being female nudes. That said, the painting he’s hung over his bed depicts a nude woman, either sleeping or passed out, sprawled on her back across a couch while a javelina dressed as a man leers at her, and it’s terrifying even before we learn that Charles uses the javelina to represent himself in his art.

What Have We Learned? Nude models of Bisbee, Arizona: Before you agree to pose for Charles, please think twice.

Why Are We Watching Him? He’s checking in with Gerald, the officer who’s been managing his parole for three and a half years.

How Did He Get Here? He’s been convicted of molesting several children.

What’s the Grossest Thing We See? No offense to the man who’s preyed on children for many years of his adult life, but Robert is the grossest thing we see. He’s twitchy as hell and can’t stop working his lips and jaw where his now-missing teeth used to be. He’s a creep! (Gerald notes that Robert has put in a lot of effort toward finding a job, but chalks up Robert’s lack of success to the fact that he “doesn’t present well.” Understatement of this or any year!) When Gerald learns that Robert has violated his parole (Robert was within 1,000 feet of a park, a place children are likely to be, for around three hours; he also missed his curfew by more than two hours), it’s a relief.

What Have We Learned? We should all be grateful that we don’t live in Indianapolis, where Parole Diaries takes place. Not to say that offenders just as unpleasant as Robert aren’t on parole in our own communities, but as long as their lives aren’t being documented on a reality show, we don’t have to think about them.

Why Are We Watching Him? He’s a surfer, recounting the tale of his most memorable day in the water.

How Did He Get Here? A collision with another surfer, 150 feet from shore, caused a shard of the other surfer’s board to break off … and get jammed into Tom’s face.

What’s the Grossest Thing We See? EMTs on the scene took a photo of Tom with the surfboard shard jammed into his face, covered in blood; even after they cut a few inches off it, that still left eight and a half inches of fiberglass sticking out of Tom’s cheek.

What Have We Learned? One might have thought the only injury one could sustain from getting hit in the face with a surfboard would be blunt-force trauma. Now we know better.

Filed Under: Hoarders, I Was Impaled, Reality TV, The Lunatic Channels

Junot Diaz Is a Genius, Says the MacArthur Foundation