Judging The X Factor: Li’l Monsters, Some Actual Emotion, and the Merciful End of the Audition Round 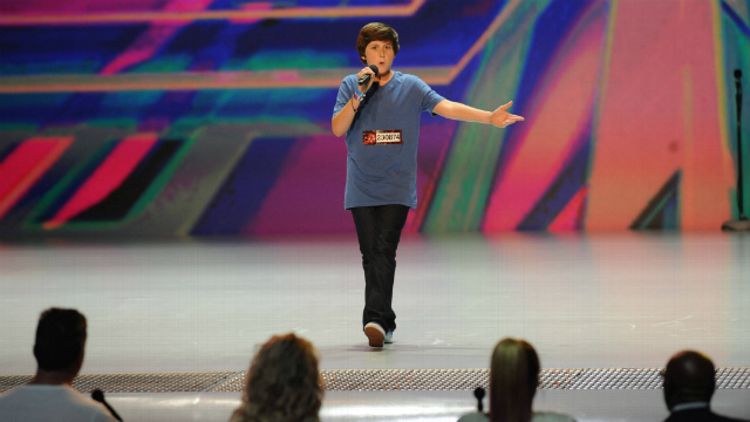 For reasons still not entirely clear to them, Grantland editors Jay Caspian Kang, Mark Lisanti, and Emily Yoshida have decided to track the second season of The X Factor. This is the stage on which dreams will be made and broken, and destiny waits for no one (unless you DVR it).

There’s nothing like the silence before a performer sings his or her first note; that incandescent moment when anything is possible, and for all we know, we might be meeting the next Ciara or Colby O’Donis for the first time. There’s a reason why The X Factor takes us on this journey, even though, as my colleague Mr. Kang has observed, it’s not always fun — it’s important that we know our competitors from the first time they attempt to entertain us so we can have a fuller understanding of where they’re coming from when they do that stripped-down, acoustic version of “Party Rock Anthem” on LMFAO Night. Those of you who are waiting until the live shows to participate in this cultural phenomenon are enjoying the steak without raising and slaughtering the cow, which is half the fun of eating a steak.

So those of you who have stuck with us this far, give yourselves a pat on the back — you’ve devoted three hours a week, missed social gatherings, an introduction to your potential spouse, and lots of marginally better TV, because you know there’s no half measures when it comes to finding the sufficiently viable artist who will validate the vapors-inducing expenses incurred by Syco in the 2012 fiscal year. And it’s not like there’s nothing for us in the deal, either; the joy of seeing stars born on a minute-to-minute basis is a reward in itself. The journey has already been unforgettable, and you know it’s only going to get better from here on out.

Oh, dammit, I forgot about this fucking kid. — Yoshida

Yoshida: Here’s a fun game to play. It’s called “Child or Monster?” and all you have to do is go up to the suspected child/monster and say a single phrase: “You’re too cute!” A child will respond by looking vaguely embarrassed and uncomfortable, maybe hiding his or her face. This is because children do not want to be cute. Children want to be beautiful and strong. However, a monster will invariably break out in an ear-to-ear grin, maybe put a hand or two to the face as if to confirm the appraisal, and then, horrifically, vomit out a long, nasal “Thaaaaank youuuuu!” A monster is thrilled to be cute. Cute sells, and monsters (and their parents) are all too aware of this.

So, Trevor Moran is a monster. That’s OK! The X Factor accepts rising stars of all backgrounds, even nonhuman ones. What’s truly unacceptable about this audition is the fact that we were made to watch this monster perform a full-length would-be viral video that should have stayed in the living room of his monster parents, where I’m sure his other age-inappropriate Top 40 covers and Channing Tatum impressions are met with anticipation and shameless encouragement. Oh wait, didn’t he say something about having a YouTube channel? Let’s check this out. Oh, I can’t wait. This is going to be sad.

Kang: Yes, Trevor Moran is a monster, but not because he acknowledges his C+ cuteness or for his crimes against LMFAO. Rather, Trevor Moran is a monster because he faked being sick to garner the sympathy of the audience. What craven, awful shit. Trevor and his mother understand that every contestant needs a sob story and when “Well, he kind of looks like a young, brunette Ellen DeGeneres” wasn’t going to fly in the red states, they said, “Maybe if I lie on the ground and pretend to be really sick they’ll play that sad piano music and America will relate to me.”

Somehow, Gatoradegate is only the second-worst instance of manipulative garbage on the show. First place, of course, goes to Jillian Jensen, the girl with 15 friends who turned her audition into the vaguest anti-bullying PSA ever.

As for little Trevor’s performance, he needs to take a lesson from that choreographer for hire who sold the same cheerleading routine up and down the California coast in Bring It On — get fiercer, Trevor, and do something constructive with your hands.

Lisanti: We Don’t Need to Talk About Trevor.

Or at least I don’t. You monsters covered it.

Kang: Even though Jordyn did the whole “THANK YOU FOR CALLING ME CUTE” thing down to the too-tight smile, I’m stopping short of calling her a monster. She just seems to be legitimately happy and pink-obsessed. I wouldn’t want to sit next to her on a plane, but if the fate of the world rested on a death match between Jordyn Foley and Trevor Moran and I had a tire iron to gift to either kid, I’d calmly walk into the octagon and smack Trevor Moran in the knee because I’m an adult and so I’m stronger than a 12-year-old girl.

I also liked how she never once broke out of her half-cockney/half-chipmunk accent. It was like watching some weird version of Child’s Play where Chucky’s sister shows up, stomps around in a red polka-dot dress, beheads all the Barbies and then chases Trevor Moran around with a chainsaw.

In a season of farts, she’s a keeper. I like her mom, too.

Yoshida: I forgot to mention one thing while I was on the subject of monsters and their monster parents. I know these things because … I used to be one of them. And don’t worry, no matter what Kang says, Jordyn is totally still a monster. Not that there’s anything wrong with that! She’s the sort of girl I’d see at community theater auditions who’d roll in 20 deep with every cousin and grandparent in a 50-mile radius, at least five of whom were also auditioning that day, the rest of whom could be found outside chain-smoking Kools. In a couple months, if you happened to go over to their house after rehearsals one night, they’d serve some weird snack like peanut brittle and everything would smell like mildew. There was always a kind of hollow-eyed desperation to these clans; even as a young monster-child I had an inkling that it was weird for so many adults and children to be so serious about getting a part in the latest Tacoma Little Theater production.

Now, Jordyn does not inspire the same kind of rage that Trevor did, but their combined one-two punch last night made for a lot of PTSD on my end of the couch. Bottom line: They have GOT to raise the age limit on The X Factor next year. These shows are truly exciting when you see an adult or near-adult pour out his or her soul onstage; and I’m sorry, but neither children nor monsters have souls that have reached pourable volumes. I don’t believe Carly Rose Sonenclar knows how to break even the skin of the soul pudding that is Nina Simone’s “Feeling Good”; push comes to shove, I don’t think Reed Deming would actually catch a grenade for love. Maybe Jordyn and Trevor weren’t going for “soulful” tonight, but we engage with performers because of a perceived basic commonality with them, and I’m pleased to say the time in my life when I could relate to Jordyn or Trevor is far behind me.

Kang: Agree with all that. I miss Crystal Bowersox so much.

Lisanti: Guys, I have some terrible news for you: Jordyn does not last very long in Catching Fire. The citizens of District 8 are too slow to send her a tribute microphone on one of those little whirlycopters, and she’s thus unable to be just cute enough to charm her way out of a particularly gut-wrenching fate. (I’m not going to spoil it, but it involves a fishing net, a bag of apples, and a rendition of “Memories” that will haunt you until your dying breath.) Katniss even uses an arrowhead to carve the name “Jordyn,” encircled by a ring of stars, on the inside of her forearm as a reminder of the brutality of life in Panem and the disgusting, gladiatorial spectacle that is The Factor Games. The distant cannon blast signaling her exit will not be loud enough to drown out your anguished sobs.

Lisanti: There’s a real cognitive dissonance when The X Factor makes you feel any emotion that’s not “utter disgust about how you’re spending three hours per week” or “tearing at your ears to make the badsounds stop.” But they got us to that emotionally confused place with Panda, and now again with Freddie. Real people with great voices, on their way to boot camp; as badly as we’d like to see them advance on talent alone, we know how the show’s set up, and they’re not going to be long for the competition. You almost worry that Simon’s going to force them to become an Olds supergroup, pit them against Emblem3, and sit back as nature takes it course. (PandaMonium crushes E3 when it’s revealed the blunted-out punks have been lip-synching to some old Incubus demos they found on Megaupload.)

Yoshida: I feel really bad right now because yes, while Freddie’s audition was very moving and his story was legitimately heartbreaking, I couldn’t quite take myself out of the game during his performance of “Wind Beneath My Wings,” and spent the duration playing out every possible version of his X Factor journey in my head and trying to decide which one left me feeling the least depressed. Good news is that I’m guessing Freddie’s brush with death gave him a good dose of perspective when it came to his audition and the importance of Britney Spears’s opinion, and I love that he was neither groveling nor dismissive when Simon effectively asked him to lose 200 pounds in time for boot camp. This guy’s got a level of talent and chill that would take three lifetimes for some of his fellow ticket-holders to learn. I’m rooting for him.

Kang: SORRY, I’M SITTING ON A PLANE NOW AND I JUST WATCHED FREDDIE COMBS’s AUDITION AND I’M FIGHTING BACK TEARS BECAUSE BEING 900 POUNDS AND ALMOST DYING BUT BEING SAVED BY THE LOVE OF A GOOD, DEVOTED SPOUSE IS REALLY A GREAT STORY, UNLIKE BEING “BULLIED” WHEN YOU HAVE 15 FRIENDS, HONESTLY I CAN’T GET OVER THAT AT ALL AND I’M GOING TO MENTION IT EVERY TIME.

Simon, just when I thought the show is dead and gone and you couldn’t trot out one more annoying little stage-mom’d brat on the stage … YOU GO AND COMPLETELY REDEEM YOURSELF! Love everything about Freddie Combs. His great name, his Southern charm, his hair, how he can get through “Wind Beneath My Wings” without once sounding strained, like he was saying, “Listen, this is at eight but if you need to go 10, we can go there.”

“Wind Beneath My Wings” is a high-wire act. There are just so many spots where the song can devolve into screeching or schmaltz, so many decisions to be made. On the “AND I” before “can FLLYYYY higher than an eaaaagle,” do you go high or do you go deep? The first time you hit, “heeee-ro” are you at 85 percent or 95 percent? Do you do the “everything” or the “everythingeverythingeverything I’d like to be …” That Freddie Combs could belt out such a nuanced and touching version bodes well for his future on the show. People don’t want to just be yelled at by pubescent singing machines who can go on crazy runs and hit high notes (ehrmmm Jessica Sanchez), they want actual singing and to be taken on an emotional journey. Freddie accomplished that last night.

Now it’s time for our X Factorers Three to put this audition viewing experience to some use and make some completely baseless predictions about who will make it to the finals!