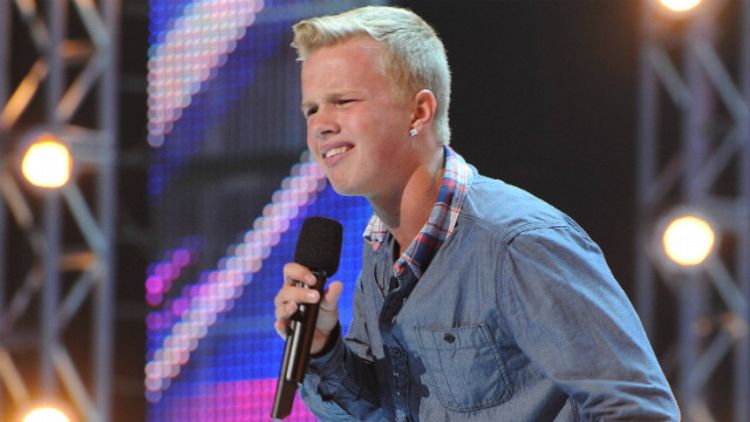 For reasons still not entirely clear to them, Grantland editors Jay Caspian Kang, Mark Lisanti, and Emily Yoshida have decided to track the second season of The X Factor. This is their story, and it does not end well.

Yoshida: Getting a distinct Landry Clarke vibe from this guy. Did not want to like him, as the shimmering layer of white-blond chest hair poking out of his shirt and his posse of equally pale, chest-pounding backstage bros had me momentarily distraught, but the kid won me over, which mostly means that by the end I felt more embarrassed for him than angry at him (funny how Judging The X Factor is usually just a binary between those two emotions.) Was I disappointed that by “positive raps” he didn’t mean he was about to bust out some ice-cold Jesus flow? Yes, but I understand if The X Factor isn’t ready for their first hard-core Christian rapper. Crucifictoriou$ will have his day.

But seriously, this show has two more weeks to prove that it is not too nervous to put a grown, non-white rapper on that stage. I feel like four yeses for Rizzloe Jones just decreased the odds of that happening.

Kang: I have no words for Rizzloe. But man, if he had any future as the poster child for the Hitler Youth, he certainly messed it up by rappin’.

Lisanti: Invoking the Hitler Youth is really not very positive-raps of you. In fact, it’s almost exactly the inverse of positive raps. Hold on, I’m i-navigating over to RizzloeJones.com to send a positive-rap-o-gram to your apartment. Let me know when you’ve been upliftingly freestyled back to a less toxic frame of mind.

Kang: Aaaaaaaand the first “I’m not here to make friends” in the history of singing competitions! Seriously, I’m scanning my brain and outside of maybe one hint at “INHTMF” in the first and only season of “R U The Girl: The Search for Left Eye’s Replacement,” I can’t remember the last time INHTMF was even relevant on a singing competition show.

Outside of that, I also have no words for CeCe Frey. In unrelated news, I’m going to start selling my plasma at 8 p.m. every Wednesday night and therefore won’t be able to cover this show. I’m sorry guys, but I’ve got mouths to feed. Gambling mouths.

As for Diamond White, maybe 13-year-old girls shouldn’t sing “It’s a Man’s Man’s Man’s World” because you immediately start asking, “Well, what in her life experience has contributed to this bleak worldview?”

For the second straight week, I’m going to call shenanigans on Simon. You can bring us Britney’s withering, almost librarian-esque condescension and Demi’s wonderful ponytail, but unless you bring some talent with it, the show doesn’t work.

Lisanti: After watching CeCe’s shenanigans, and thinking back to last week’s incident with the Texas Mean Girls, you may ask yourself, “When did singing competition cattle-call audition shows become about psychological warfare?” After all, if you look to the regular world, the cows idling in their pen are happily chewing cud as they await their short walk to the abattoir, not trying to chew off each other’s faces. (OK, put aside the fact that their teeth are ill-suited to bovine face-attacks for a moment. I’m working toward something here.) And then you realize: The contestants think they’re gladiators, not cattle. They’re looking for any edge they can find before they step into the arena. I suppose that’s a more romantic notion than the reality of the situation, which is that 99 times out of 100 they’re being herded onto the stage just to have a bolt shot through their neck.

On a brighter note, Diamond White is adorable. Somehow she makes sharing a name with the premium cocaine that ruined Lindsay Lohan’s career seem incredibly wholesome.

As for CeCe: The “second song” is a tricky mistress in the world of X Factor, and it never feels like it wasn’t completely pre-planned. The thing is, it’s way more believable for someone like Kaci (Oh my god, I remembered her name, what do I win?) to get up there, stink up the joint, then break out another song and just dig herself in deeper than for that second song to somehow turn everyone back on her side. Sure, song choice is important — especially once we get to the live shows — but it’s not going to be the difference between awful and $5 million. So CeCe sang that Christina Aguilera song SLIGHTLY better than “Unchained Melody”; let’s declare her our new “girl crush.” (I love you, Demi, but I’m not sure what you were thinking with that one. Maybe next time Britney offers you a “breath mint” you should pass.) I feel like if you spend $5 million on someone’s career then they should be able to sing anything, right? Even the birthday song.

Also, how positive are we that CeCe isn’t hosting a Trill? Shouldn’t that technically put her in the groups category?

Kang: The only glimmer of hope in a giant poopslide of a season. Panda sang my favorite song of all time and she hit the low notes like she was Toni Braxton and she did a passable “Hey, I’m here and isn’t that funny?” Susan Boyle routine, but it’s hard to imagine she’s got more than five or six songs in the holster. After she does five Etta James songs and “Unbreak My Heart,” where does she go?

Yoshida: Panda getting wheeled away on a stretcher with an oxygen mask while mumbling “I don’t want Simon to see me like this” was such a real moment. I feel like we’ve all been there, even those of us who have never met His Cowelliness. “Reality TV Gold” (sigh) medical emergencies aside, I felt incredibly conflicted during Panda’s audition, because despite her considerable talent and obvious likability, I couldn’t see her going very far in the competition/post-competition without having some kind of Susan Boyle–esque mental breakdown. We like the Pandas of the world better than the CeCes because it’s more fun to watch a person with zero guile have their moment in the spotlight — someone who didn’t spend five hours at Forever 21 carefully curating every piece of her outfit, down to the skewed fedora and faux-leather knuckle gloves; someone who can both possess an amazing, rich singing voice but not take herself so seriously that she wouldn’t use her pre-audition camera time to make off-color but still charming prison sex jokes — but that usually means they are underequipped to deal once the reality when fame, even just X Factor fame, starts to kick in. Do I want to see Panda make a full recovery and come back for boot camp? Of course; I’ll take anything that makes these two-hour slogs less painful. But I feel like that’s a more selfish desire on my part than a desire for what’s best for her.

Lisanti: The Panda situation was genuinely upsetting. But that was the best audition I’ve seen on either season of X Factor; it was so good I actually want to buy her version of “Bring It on Home,” which is the highest compliment you can pay to a person on one of these shows. That said, it’s interesting you make the Susan Boyle comparison, because that’s what instantly leapt to mind. Except I couldn’t remember Susan Boyle’s name. I actually started Googling around to try to figure it out. I already can’t recall the exact queries, but they were close to “woman on tv who looked like she can’t sing” and “frumpy british lady great singing voice on television.” (Everything I know about Google, I learned from DMX.) I think I finally found her on YouTube by searching “opera.” Really. Three years out from her Moment and I couldn’t even bring up her name without jacking into the Karaoke Matrix. That’s probably more a function of the state of my Internet-perforated brain than an indication of Susan Boyle’s place in the celebrity firmament, but it happened. Her name had been temporarily erased and replaced with a word cloud of vaguely related search terms.

If Panda gets to be the next Boyle — and she won’t, that kind of success is irreplicable precisely because these shows are always trying to clone it — I won’t forget her. Her personal branding is so much better. No one forgets a panda.

Lisanti: If, as Simon seems to be accusing, the Citizen boys actually have a time machine that allows them to take musical journeys 10 years into the past, I would humbly request that on their next trip to 2002, they seek out Rizzloe Jones’s house in suburban Kansas City and confiscate his copy of The Eminem Show. They could even pretend to be O-Town, out on a door-to-door hunt for new talent, so as not to arouse suspicion — that kind of thing happened literally every day in 2002. Anyway, the details of the mission aren’t important; the crucial thing is that a young boy named Rizzloe be dissuaded from making whatever history-altering choice resulted in him being on my television in 2012.

Yoshida: “Does anyone have any hair product?” And with those words, I knew my faith in Emblem3 was about to be seriously tested.

Kang: At some point the near future, the death of the film, music, and publishing industries coupled with several more years of economic downturn will give rise to a deeply cynical and terrible era in the arts. Movies will be made based on board games, soft-core Twilight fan fiction will be all that anyone reads, and music will be consumed by ready-made, soulless, and conniving music acts that will make the Backstreet Boys sound like Teddy Pendergrass. When that happens, I’m going to drive to whatever mansion Citizen is sharing with the Scissor Sisters, stake my feet to the tennis court, and calmly, meaningfully light myself on fire.

Bros, shaking your hips and snapping isn’t a dance move and En Vogue is not anything to be fucked with. Again, I have no words. What is going on this season? Remember Chris Rene? I watched his audition a couple days ago and misted up. This show was sooo good last season.

Yoshida: It was just completely the wrong song for your voice. Do you have anything else? Don’t say Adele.

Kang: Can someone explain why a millionaire on a network TV show looks like she’s been bleaching her own hair with lemon juice and Clorox?

Jay Kang could really use some positive raps right now.
Mark Lisanti embraces time-travel as a tool for making the world more pleasing to him.
Emily Yoshida knows what a “Trill” is.